Last performance, not only for me, but for the whole cast. And this one; was it the best? All I can say it that it is really amazing to see that for every performance new things happens, new inspirations. WOW. Amazing. Finally I can say Sondra, you have no longer a diction problem and I kind of like your voice now, and find you wonderful as an actress. But you know, Catherine Malfitano is my preferred Lina, and I have her on DVD, so, I am OK. In this performance we really know, because we saw it, Lina and Raffaele is really, how do you put it, "hot together" ?. So the duet Lina / Raffaele which is so hard to get to make it natural, they did that, Sondra and Reinaldo Macias. Amazing... BRAVI!! and the duets Stiffelio/Lina, wow, fantastic. Anyone would have been scared stiff with Jose Cura's Stiffelio completely raging mad almost violent. FANTASTIC. And when Stiffelio took of his wedding ring in act 2. And to see him almost completely crushed when listening to Lina. And on this last night, we were so close to maybe Stiffelio would reach out to his wife. Soooooo close. But he was crushed .... GREAT, FANTASTIC...

And you think that I regret seeing STIFFELIO three times, no way.... (of course all JCx members understand this kind of operamania)

Could not sleep all night. Got a SMS at 3 in the night. I was still awake. And up I was 0615 (UK time). So I was in Stansted in time. Relaxing. Flight to Bergen and then the bus back home. 4 hours on bus. Home at approx 2000. God, I am still tired, days after....
Written by operaduets on Friday, May 11, 2007 No comments:
Email ThisBlogThis!Share to TwitterShare to FacebookShare to Pinterest

Wonderful, interesting to hear Jose Cura explain his ideas of what an opera singer should be like. I am not sure if I agree to everything. I am certainly not sure if I agree that Stiffelio is complicated figure. It was interesting to hear his plans for the Pagliacci in Rijecka, made me want to go there. But I am not, unfortunately.
Written by operaduets on Thursday, May 10, 2007 No comments:
Email ThisBlogThis!Share to TwitterShare to FacebookShare to Pinterest

Fourth came May 8th, Stiffelio in London with Jose Cura as Stiffelio. As asked previously, why 3 times Stiffelio, the answer is to get the BEST performance. And as being before the last perfomance, May 10th, this was it. The BEST. Here I was overwhelmed, Jose Cura etc was great. This was not the same perfomance, the acting was quite different. Sondra was better,but the lack of proper prononciation was turning me off. I have never heard a singer not being able to sing MADRE, with all the letters, Sondra sang ..ADRE. Of course we have sur-titles now, so we can read it in English was she was singing. But really When you know the text as I do, it is terrible not be able to hear a professional opera singer sing the words.I am not talking about the high notes, as I understand that might be asking too much. But, oh, dear Sondra, please be better in the future.
Written by operaduets on Wednesday, May 09, 2007 No comments:
Email ThisBlogThis!Share to TwitterShare to FacebookShare to Pinterest 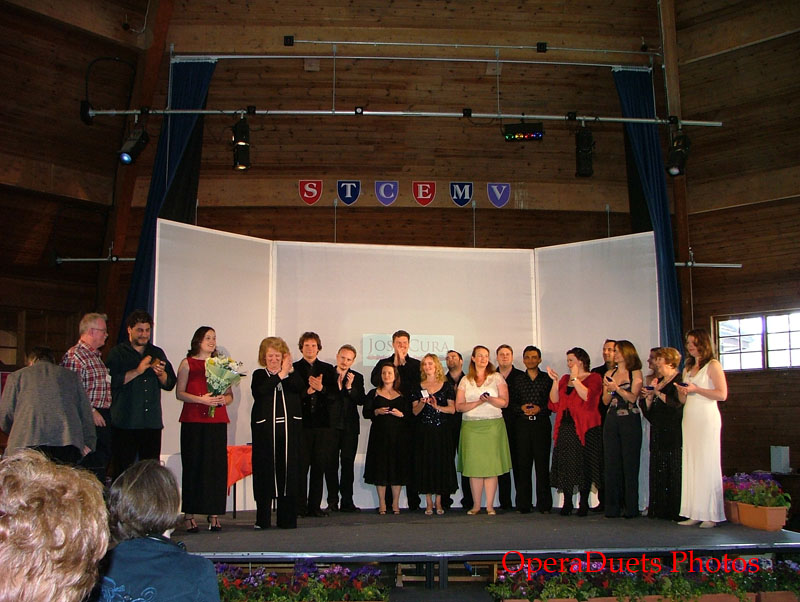 Concert with JC's master class students, New Devon Opera
Third came May 7th, concert with the 15 master class students in Devon. Glorious singing and some signs that some still need more to really be great in concert and opera. The German tenor singing operetta was surely needing more years of learning the craft if he is going to the opera, but surely he was communicating and maybe it will be in operetta musicals his work will be. There was a great difference between singers that were truly in the skin of their characters, and then there were those still not finding out how to act, what to do with my arms...

And then there was Benjamin Bevan, not only the most beautiful baritone voice, but surely a great singer/actor as Roderigo di Posa. WOW, what a fantastic death scene, this was really the whole scene Roderigo/Don Carlo from Son io, mio Carlo to Per me giunto il di supremo/O Carlo, ascolta, and we even got Jose Cura as Don Carlo. WOW, it was the perfect end of this concert.

The programme was beautifully put. With the Dutch baritone doing the prolog from Pagliacci beginning the concert, and as endof act 1 with Danish soprano singing the whole Violetta scene at the end of La Traviata act 1. And the programme ended, most operatically, with someone's death. GREAT.

Masterclass with Jose Cura, New Devon Opera
Second came May 6th, Master class in Devon, Jose-Cura-wise. I told every-one about the great fare I got on the National Express bus to Devon and back (It cost me 2 GBP all-together). But after my long travel with bus London-Devon-London, I can say I would have been better off with the train, shorter ride and I am sure more comfortable. So cheap is not everything...

As usual it took me a long time to find the hotel, a max 10 minutes walk too me 50
minutes. And that was hot when walking with a suit-case (luckily with wheels) and a
backsack. As I have a tendency of getting head-aches I got one or two in Devon. Then the event of the evening, Master Class with Jose Cura. 12 gifted singers and Jose Cura. Not the usual master class, this was just a highlight class filled with photo-slides from the real master classes. We got a lot of Jose Cura talking about how the singers had developed. And some singing and tutoring from Jose. When they was on the right track he stopped them, to tell us we will get the rest as the concert tomorrow.
Written by operaduets on Monday, May 07, 2007 No comments:
Email ThisBlogThis!Share to TwitterShare to FacebookShare to Pinterest 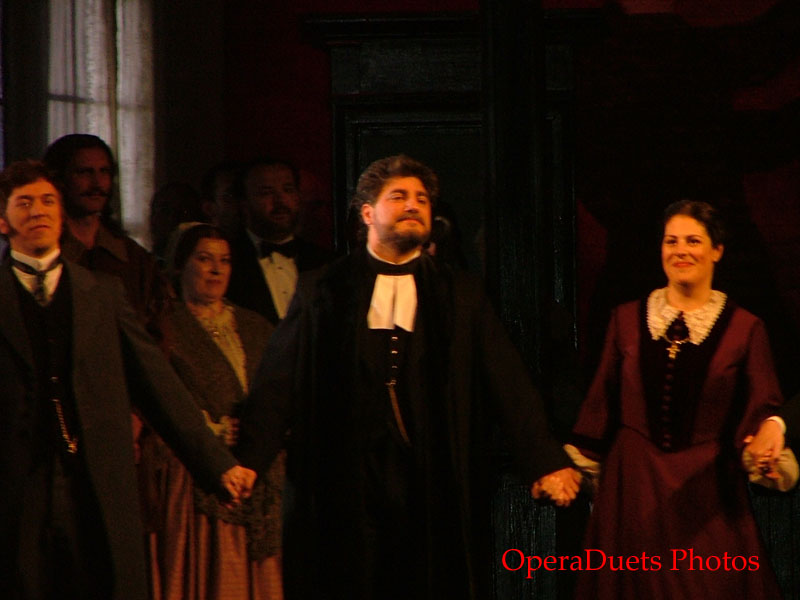 Weekend in Devon
or
Why 3 times Stiffelio in London

First came May 5th, Stiffelio in London ROH with Jose Cura, Sondra Radvanovsky and
Roberto Frontali. Before going to London I had read the reviews, almost all complaining of the singing being to LOUD etc. What I found as being the truth in London on May 5th that yes, Sondra Radvanovsky has a big voice and that indeed I could hear her better than the other singers. But that this was just a competition of loud singing, it was not, not on May 5th, I cannot say for the previous performances since I was not there. Roberto Frontali as Stankar was good, but in my opinion he was not the only good singer her as many of the reviewer was saying. May 5th performance was not the greatest Stiffelio. Jose Cura was good but in my opinion he was over-acting, Sondra Radvanovsky as Lina was crying too much, too often, and I did not like her singing much and her lack of prononciation of the Italian text was appalling. As I said Frontali was Ok. Reinaldo Macias as Raffaele did not cut such a great figure here as in Zurich. He was pale here.
Written by operaduets on Sunday, May 06, 2007 No comments:
Email ThisBlogThis!Share to TwitterShare to FacebookShare to Pinterest