for all performances, except Premiere.

Written by operaduets on Thursday, July 19, 2007 No comments:
Email ThisBlogThis!Share to TwitterShare to FacebookShare to Pinterest

Written by operaduets on Thursday, July 19, 2007 No comments:
Email ThisBlogThis!Share to TwitterShare to FacebookShare to Pinterest

Written by operaduets on Monday, July 16, 2007 No comments:
Email ThisBlogThis!Share to TwitterShare to FacebookShare to Pinterest

I have made changes in my two websites: www.operaduetstravel.com & www.operaduetsphotos.com. First page looks different from before.

I love my new background photo.

SAD news Photosite is closing down, so my website www.operaduetsphotos.net must find a new home, or maybe I will just close it down. Photosite is actually doing quite well against its competition, see here. A review of Photosite.

www.wideroe.no
To find almost all the best prices for travel by air. In Norwegian, English and German.

www.operabase.com
Best choice for information about when and where and how to get tickets to opera houses.

Written by operaduets on Sunday, July 15, 2007 No comments:
Email ThisBlogThis!Share to TwitterShare to FacebookShare to Pinterest 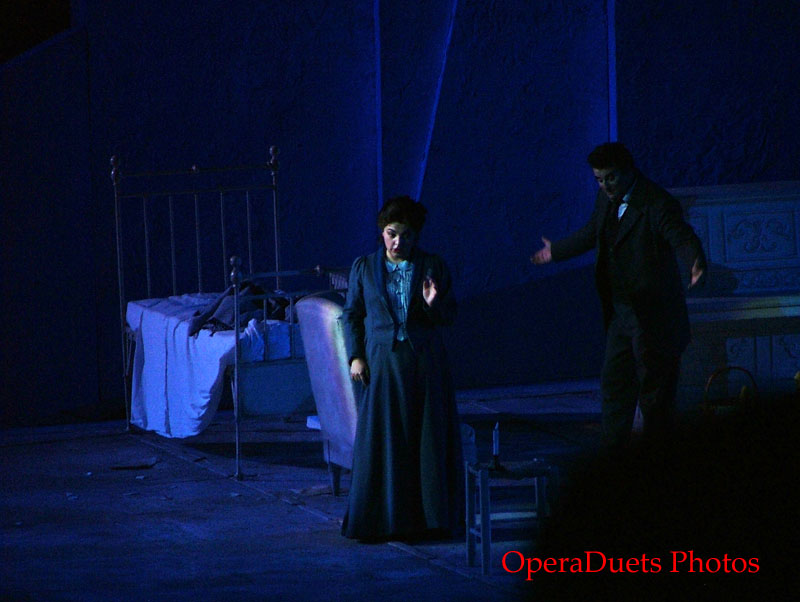 Another fine day in Verona, Italy. Problem with Arena di Verona and La Boheme, is that the stage is huge, and that this opera is more of a intimate romance. Of course act 2 is a great, big scene with lots of people. But this problem was a Zeffirelli-like production, huge and the little people got lost. Not being able to find out right a way Rodolfo and Mimi was a disappointment. Zeffirelli would not have made that fault, I believe. he would have a way to highlight the important people in the opera. Act 1 + 4, all action in a tiny bit of the stage, in the middle. But the Arena is so big why did the director not make the attic of the artists, Marcello and Rodolfo, huge using most of the arena stage area.

Other problems was for me all the circus of act2, people blowing fires from their mouth. Just a show that made it difficult to get the real operatic action... And act 3, very bad, hated the bicycles thing. Here we are supposed to see peasant woman at the customs controlling their bread, milk cans etc. The bicycling was just a circus thing... And act 4, when the guys are pretending to be at a ball. Here they were not dancing, they were drying up laundry and playing with that, Gavotta, Pavanella, Fandango... no dance.

The singers, orchestra was all great and the production was not all bad, just not quite right and Arena was not the right place.

Waited backstage for a while, nothing. But how often do the conductor Daniel Oren drive around the Arena, I wonder. I saw him yesterday and now today.

Was supposed to be easy. Just eating breakfast at the hotel, relax, try to take the curtesy bus to the station, airportbus to the airport. But I got nervous, I got talked into taking a taxi directly to the Arena. Result long wait in the airport, just waiting to find where to check in, getting a gate, and 30 Euros for the ride. 30... Even if there was not room for me in the curtesy bus so that I would have to pay for that too, 15-18 euros, and aiport-bus 4,50 Euros. Cheaper and no wait.

That was, of course, not the worst of the day. Norway has in many years neglected to educate enough airport controllers. And they have a stressfull job, and in the past often felt neglected and distrusted by their bosses. During last conflict, 2 out of 10 was suffering a break in family (divorce etc.) So naturally now, it is summer, a lot of plane, and people who have holidays, then 6 persons get sick. (Would you want you aiport controller to be sick when looking after your plane, now).

From Verona to Munich, no problem and free food and drink. In Munich walking briskly to your gate. And everything looked normal and then, 1 hour to wait for take-off. The Lufthansa pilot tells us why. But this is a nice airplane, good air, your feet have some space. Free drinks while we wait (non-alcoholic, of course). That meant having little time to catch my plane back home. Walking briskly, waiting for my luggage a long time, walking briskly, getting my air ticket from a machine. Security line, and walking as fast as my life depend upon it, since the monitors that are showing many delays, my not my flight. My legs burns with ache, and no, this is not good. 1920 becomes 2115. I have 2 hours. I could have relaxed. Eaten. Sent my heavy bags, and not still carrying it.

Being hungry, 2 hours to relax and have something to eat is not too bad. 2130 the sign no says. The plane must be in the air by that time, slot time. We are 1 minute late, some other plane to their fuel before us when it was our time. TIME'S OUT. Lovely... Then our captein says 2320 but says he hopes that since we are all already inside, maybe we get a earlier time, maybe it will only be a few minutes to wait and not almost another 2 hours. 2 hours became 20 minutes, 2150 off we go. I am almost home 2240 at the airport.

Airportbus, just for me? Alone?

Written by operaduets on Wednesday, July 04, 2007 No comments:
Email ThisBlogThis!Share to TwitterShare to FacebookShare to Pinterest

First night bus to Oslo. Arriving Oslo 0530. And my flight is due to leave 1300. No problem, only hand luggage. Great airplane, Lufthansa, and food and drink for free. Change planes in Frankfurt. Air Dolomiti to Verona. Free food and drink. (with drink I mean Cola light). And in Verona Aiport just go out and take the aiport bus to the train station, and no waiting... It is just about 1800, and the weather is fine, my luggage not too heavy, so off I went to Piazza Bra, outside the arena to eat some real food, pizza with mushrooms. Then back to the station, and take the taxi to my hotel, Hotel Tryp. 2050 in my hotel

Free curtesy bus to the arena/Piazza Bra at 1530. My head-ache is nearly gone, and now I am longing for opera. Dinner at Cafe Opera, Piazza Bra. Wow, who is sitting not too far from me... tenor Marcello Giordani. He is checking the 2009 calendar, phone calls. And then his wife and two sons arrive and my chance to talk to the great tenor is over.

Orchestra, Coro e tecnici
dell'Arena di Verona
Now Nabucco. Not the same production as two years ago. Leo Nucci was also then Nabucco and Susan Neves was Abigaille. Disappointment, two-fold; the production in 2005 was better, and my seat was better: I could hear better then, and no-one was talking during the show. Having read some review of the production with their pointing out disappointment towards Carlo Colombara and Maria Guleghina, they loved Leo Nucci, of course... so I knew something. And it was announced at the loud-speaker, that Colombara althought slightly ill he was still singing. And you could tell he was not in top form but he was steadily better. Maria Guleghina was also weak sounding, but I think that was because of my seat. Had I been sitting in Poltronissimo God section and not (just) poltronissimo then I think my feeling had been better about this production, but I would still have found the ballett thing stupid and wondering why did they put such a boring costume on the wonderful soprano, Maria Guleghina. Fenena and Anna got something beautiful to wear. White for Fenena, red for Anna, but for Abigaille, dark earth colors.

And then singers did not come out where I was standing.

Must have more Maria Guleghina live. Especially as Abigaille....
Written by operaduets on Wednesday, July 04, 2007 2 comments:
Email ThisBlogThis!Share to TwitterShare to FacebookShare to Pinterest