Hotels in Vienna and Budapest

I almost always book my hotels via hrs.de. It is multi-lingual and you can get hotel room to special HRS price and you get many details about the hotels.

But sometimes you choose wrong hotel. I never found Hotel Schönbrunnerstrasse, Vienna. Probably went in the wrong direction, I was armed only with a Google map. But I remembered last time in Vienna when I stayed in hotel 900 meters from the opera, I saw a hotel closer to Karlplatz and Staatsoper, Papageno. So I went to Westbahnhof and the internet cafe and book a room in Hotel Papageno. Better for me, no need to take U-bahn to Staatsoper, I could just walk, and closer than my earlier hotel. Not mention easier when I was going to Budapest by train, just a few stations with U-Bahn to Westbahnhof.

My hotel in Budapest was K+K Opera, a great hotel only few meters from the opera house and I mean few (20 meters max). And it just wonderful, great hotel, nice people, wonderful rooms and bath-tub. Wellness centre and free internet in the rooms. I never tried the wellness centre and I did not have my laptop with me so I never tried it in the internet in my room. But I did get to use one of the 3 pc's in the lobby. Breakfast was good and varied. Another lovely room. So next time in Budapest I will try to get a room in this hotel, K+K Opera.

My plane from Budapest was 0905, so I asked the hotel reception about the best and cheapest way to get to the airport and when to leave. So I was advised to take taxi (ca. 20 minutes ride), 6000 HUF and leave 7 am. Minibus was another possibility but 1 hour and 4500 HUF so I would have to leave earlier and maybe miss breakfast (0630).
Written by operaduets on Monday, November 26, 2007 1 comment:
Email ThisBlogThis!Share to TwitterShare to FacebookShare to Pinterest 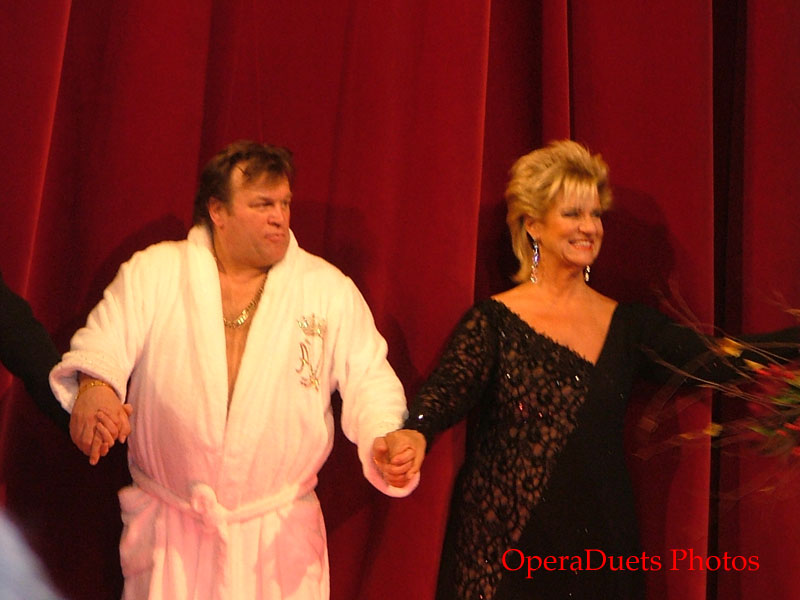 
It is Premiere of Elektra and the opera house is wrapped in red on this occasion. Only two things bothered me: that my seat got very uncomfortable after 70 mins plus of Opera, real pain in my ..., and the end where Orest kills both his sisters with a machine gun, so totally unnecessary.

Nadine Secunde was great as Elektra (no surprise there), Eva Batori was wonderful as Chrysothemis. Agnes Baltsa was magnetic as Klytämnestra.

The production: Modern and set in a bath. It started startlingly with the opera house completely dark and then suddenly some light and the thunder of Straussian music. And unlike the Vienna production we could see the people and different types and real human being. The very self-assured über-type of woman, from the more submissive one. But to be onstage without shoes, naked but for some bathrobe or just a towel wrap round the bodies, I would guess they look forward to get dressed again. Some nakedness occurred, only male, and for a short time. Elektra had a black dress (dressed as widow), Chrysothemis in white (dressed as a bride). Klytämnestra also had black dress and a white fur robe. Orest dressed very formally but with sunglasses. Aigist had only a white bathrobe which made him very self-conscious when taking the bow at the end.

The changing of color lighting the stage was very well done. So naturally it got to be very red during some parts of the Elektra/Klytämnestra scene. The symbolism when Klytämnestra was killed was perfectly. No such symbolism for Aigist.

In the end after the murders:Chrysothemis was first greeted by Orestes people as Princess and goes out to dress herself as a new Klytämnestra. Elektra also changes out with the old puff, and a white robe is over the old black. But Elektra is not ready for the happiness, she struggles with the Agamemnon tree to Klytämnestra's bed, the power lies in the bed. She is clearly exhausted. But instead of having her die in the bed of mental exhaustment Orest has her killed with a machine gun. Two shots is heard, so when Orest is supposed to kill Chrysothemis with his second bullet, all Eva Batori can do is to drop dead with no sound.

The end ruined it, when Orest kills his sisters that does not make it a Real Greek Tragedy, but if his two sisters died just of exhausted minds when Orest should celebrate his triumph. THAT WOULD BE Greek Tragedy.

More about this Elektra
Written by operaduets on Monday, November 26, 2007 No comments:
Email ThisBlogThis!Share to TwitterShare to FacebookShare to Pinterest 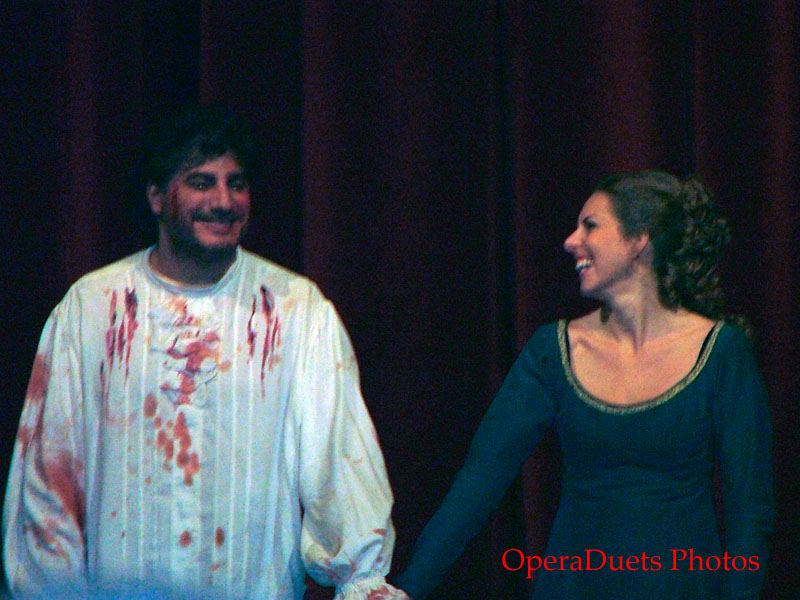 
I missed a great Scarpia, Ruggero Raimondi is always great as Scarpia. Amarilli Nizza was Ok as Tosca. Liked her Vissi d'arte. José Cura and the conductor was not always in agreement. Cura wanted to be faster. He was also acting in a way inconsistent with the times, Neapolitan time. This was a very traditional Tosca with beautiful settings. It was a beautiful E lucevan le stelle. The end duet Tosca/Cavaradossi was great (good). But Nizza could not help herself when she leaped from the castle one might have thought this was one of the first Toscas in this production, very old fashioned (at least from the -50s). One arm raised....

Paolo Carignani, conductor
Written by operaduets on Monday, November 26, 2007 No comments:
Email ThisBlogThis!Share to TwitterShare to FacebookShare to Pinterest

From Opera to Opera, Vienna -> Budapest

Two days, two countries, two operas: Tosca in Vienna with Jose Cura as Mario Cavaradossi was an old production, really old. Elektra in Budapest with Agnes Baltsa was a brand new production and I was there, at the premiere.

I did get some fine photos of the singers after the opera from stage. Jose Cura had already gone when we stood at the stage door, but I have already plenty of photos of him. Budapest with Elektra, premiere day so I did not wait in the cold for Agnes Baltsa. It was freezing cold (for me) so I went to my hotel. Lucky not far from the opera house.

I must up early in the morning for my flight back home. So I will not write much now about the operas. Except:

Tosca, the conductor was slower than Jose Cura sometimes, I do not blame the conductor. Nizza made her debut as Tosca in Vienna. She was better than in Verona as Aida (I think), but she has some old fashioned ways sometime. And Jose Cura he was really acting like a modern man when this should be Napoleatan time. And I missed Ruggero Raimondi as Scarpia. Vratogna was not Raimondi, otherwise he was good.

Elektra, I liked the production. It is set in modern times in a swimmingpool/sauna atmosphere. I guess a lot of people was happy when they finally could get dressed instead of with bathrobes and less. Beautiful Agnes Baltsa, wonderful Nadine Secunde. This production would almost be perfect if only Orestes did not shoot his two sisters with a machine gun in the end. No Greek tragedy this, only cynismen that won.
Written by operaduets on Saturday, November 24, 2007 No comments:
Email ThisBlogThis!Share to TwitterShare to FacebookShare to Pinterest

I am in Vienna, at last. Did not think it would be so stressful. First I almosz missed the airport bus to Oslo Airport. It was not that my bus was delayed... Second. The stress of finding that boarding had already started for my flight, had I known I would not have been so patient in the security line. Running and then when we are onboard, we heard it is fog in Vienna, we will be 50 minutes delayed. And yes we were. 1 hour delayed.

And in Vienna: I thought I had chosen a great hotel, but now I have changed that to a hotel I know how to find. My legs hurts after going a long way, probably in the wrong direction. Now, if the taxi drivers near Westbahnhof had looked more like taxi drivers back home then I would probably be relaxing in Hotel Schönbrunnerstrasse.

More later, now I need to eat. And go to my new hotel. (U-Bahnhof Westbahnhof.....)
Written by operaduets on Friday, November 23, 2007 No comments:
Email ThisBlogThis!Share to TwitterShare to FacebookShare to Pinterest

About the new Elektra in Hungarian

Written by operaduets on Wednesday, November 21, 2007 No comments:
Email ThisBlogThis!Share to TwitterShare to FacebookShare to Pinterest

Photos of new Production of Elektra in Budapest

Opera House Wrapped in Red
The facade of Budapest's Opera House has been wrapped in red sheets in preparation for the premiere of Elektra next Saturday. The performance, directed by Balázs Kovalik, will feature Nadine Secunde in the title role. Agnes Baltsa will sing the role of Clytemnestra.

Opera Prepares For Elektra Premiere
The Hungarian State Opera is preparing for its most important premier of the year, a production of Richard Strauss's Elektra with Agnes Baltsa and Nadine Secunde on November 24.
The production is a milestone for the Hungarian State Opera and serves as an attempt to raise its international profile, said director Balázs Kovalik at a press conference before the premiere.
The production is extraordinary because of its impressive set as well as because of its two famous leads. It takes place in an abandoned bath dominated by a cube symbolising the world.
"This performance makes very big demands of the performers, but also from a technical point of view: It will not be easy to work with Csaba Antal's gigantic stage props, which have been built with engineering precision," said Kovalik.
Secunde, also speaking at the press conference, joked that she had sung in 25 productions of Elektra, but had not seen a single Greek column in any of them.
"As far as I am concerned, the first consideration should be the stage and the acoustics, which is why my heart was lifted when I saw the outstanding work of these Hungarian artists," she said.
"The production is modern and interesting, and finally I get to wear a beautiful dress as Elektra," she added.
Baltsa said she had good memories of working with the members of the Hungarian State Opera.
"I was in a production of Carmen (in Budapest), and I worked with the Hungarian State Opera chorus on several occasions in Japan," she said.
János Kovács, who will conduct the orchestra at the premiere, said he had learned much from Secunde and Baltsa, making the production profitable for everybody.
Elektra - with Secunde and Baltsa in the lead roles - will be performed on November 24 and 28, and on December 1. The production will premiere with a new cast, including Annamária Kovács, Szilvia Rálik, Zsuzsanna Bazsinka and Attila Wendler on December 8.
Source: fidelio.hu
Written by operaduets on Wednesday, November 21, 2007 No comments:
Email ThisBlogThis!Share to TwitterShare to FacebookShare to Pinterest

Written by operaduets on Monday, November 19, 2007 No comments:
Email ThisBlogThis!Share to TwitterShare to FacebookShare to Pinterest

Written by operaduets on Tuesday, November 13, 2007 No comments:
Email ThisBlogThis!Share to TwitterShare to FacebookShare to Pinterest