For the third time I see this opera, Elektra by Richard Strauss. Yet another production. Vienna, Budapest and now Florence. Agnes Baltsa as Klytämnestra. This production is not bad. Actually it is a good one. The best of the 3. But I still have not learnt to love this opera. And with Seiji Osawa conducting; it is a one act opera lasting 1 h 50 mins, which is too long.

This was a black and white production. All in black except Klytämnestra and Aigist. It was a simple and compelling idea: the servants of the house acted like doubles to Elektra mimicking her moves and yet acted as the dogs that Elektra was living with according to the libretto. Everyone was in black dresses, Elektra's sister too. Hard and not necessary to see different except when singing.

The whole stage was a confined space with mural walls. Like a room and yet like outside with dirt on the ground. In the middle of the stage was a grave where a naked and dead Agamemnon was lying. It also worked as the "door" to the castle. Some times people would come into the stage or go out from the front side door (not visible from the audience room) but other times they would just simply appear from the back of the stage where it seem not be any opening. Appearing from the a wall of black clad women. Klytämnestra on her bed was carried by the servant from the back suddenly appearing from the confined space as the whole stage was.

The production was really stylish and clean. Had I loved this opera then I would have been overjoyed by seeing it. At the same time for me it acted like a decider I think I will not go to Munich for a 4th production of the opera even with Agnes Baltsa as Klytämnestra.

It is not that this opera is without beautiful music, it has that. But as it is an 1 act opera with no natural space for a pause/interval it is simply too long. And it is not a happy opera at all. Had it had a small comic relief it would not be too bad.

Singing was good. Chorus and dancers was fantastic. The ladies were great singers/actors. Orest was not at their level. Weak voice, little presence.

And too end it all, I did not take any photos. And I did not see Agnes Baltsa before or after the opera. I met an opera friend in the opera house we actually sat together. I was supposed to give her my address. And, guess what, I did not find her again. I was in the back of the opera house and in the front. Florence ain't my city... (McDonald's was good, does that count?)


For more reviews from my travels, see www.operaduetstravel.com
Written by operaduets on Thursday, February 28, 2008 No comments:
Email ThisBlogThis!Share to TwitterShare to FacebookShare to Pinterest 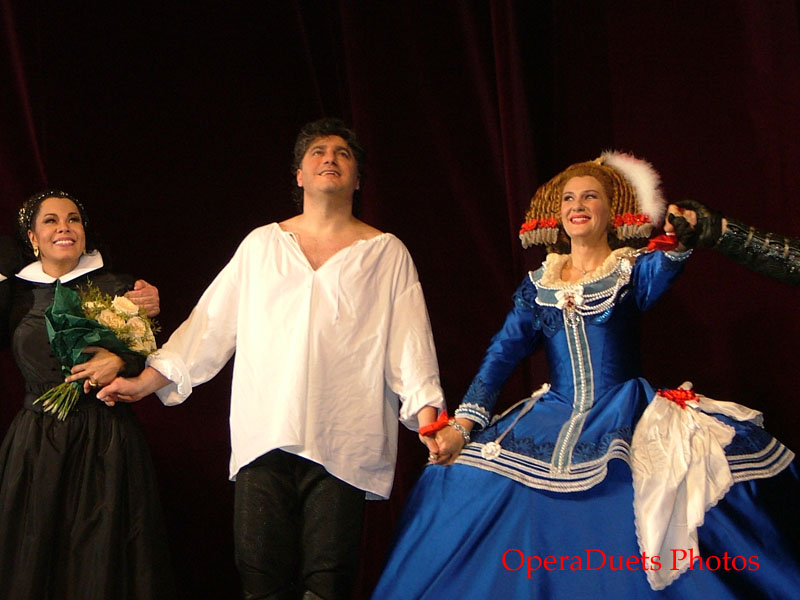 
Supported by the Georg and Bertha Schwyzer-Winiker-Foundation

Finally in Zurich to see Le Cid with Jose Cura as Rodrigue. A new singer as The King. His debut. Massimo Cavalletti did well.

Difficult music in act 1+2, almost no help in orchestra for the singers. Mass scenes are wonderfully sung.

Did not like the scenery in this production. If you sat in the middle or high up you could see everything. But for those on the sides very much up the opera was not to be seen because of 2 decorative walls. So how could the Infante Isabel Rey see Chimene Isabelle Kabatu when she came from the right, not at all. Stupid.... Just like Isabelle Kabatu was looking out in the audience when she "saw" Rodrigue Jose Cura. (stupid).

Michel Plasson directed the orchestra and so he must be blamed for the slow and boring "Pleurez mes yeux" from Isabelle Kabatu. Kabatu was in excellent form especially in acts 3+4, but she was boring and having heard Montserrat Caballe singing this opera means that one know how wonderful and exciting it can be.

The great and wonderful aria from LE CID "O souverain, o juge, o pere" was not such a jewel in the opera version. The concert version is so much more wonderful, the opera has the chorus interrupting and St. James singing to Rodrigue. Very disappointing.......

The costumes was somewhat extreme "historic" idiocy. Jose Cura in soldier's uniform was great. Otherwise the production was a half-way: modern in scenography and "traditional" in costumes, and Regie was not great. Did Chimene have to act like a silly teenager? Stupid. Luckily Isabel Rey was wonderful, acting a dignified L'Infante.

Andreas Hörl was a wonderful Don Diego. The arrogant Count of Gormas was sung by Cheyne Davidson.

Isabelle Kabatu and Isabel Rey sound perhaps too alike to make the duet great. I wound have wanted more music for L'Infante and Isabel Rey. A duet with Rodrigue Jose Cura would have been great.

I found the libretto somewhat weak and the music unexciting
Written by operaduets on Thursday, February 07, 2008 2 comments:
Email ThisBlogThis!Share to TwitterShare to FacebookShare to Pinterest


Le Cid without José Cura was still good. But without Cura as Rodrigue and me ill at the time, it was good for me to just be home.

Then I thought January 26th, but even with José Cura as Rodrigue it was too close for me. After that February 1rst or 3rd. Choosing Feb 3, 2008, was good because of weather conditions in Norway. The only false move was to go by bus from Oslo (and back home) and not by plane. On Monday 4th arrived in Oslo 1315, could have taken the plane 1605 and be home at 18, but chose cheap (bus) 1450 that should have been home at 22, but the mountains made it 0215 in the night. Tired...

Written by operaduets on Tuesday, February 05, 2008 No comments:
Email ThisBlogThis!Share to TwitterShare to FacebookShare to Pinterest