My weekend, in short:


There is a saying "Shit happens" when bad luck strikes. And I had some on travel. But most importantly not in the opera. José Cura was singing his best Cavaradossi. Maria Guleghina and José Cura had great rapport towards each other. Maria Guleghina was amazing as Floria Tosca. They both acted and sang extremely well, alone and were magic when both was together. And then one can add the third, Carlos Almaguer as Scarpia, this was his deservedly triumphant debut at the Wiener Staatsoper. A menacing and deep voice and he did just everything right to be a super Scarpia.

There were some minor fault. But they were really minor. In the 2nd act and had mostly with windows and doors. In the beginning one opens the window to hear the music outside the palace. But the music was already there when one opens the window. And again when closing the window the music stopped before the windows was closed. Thus shattering the illusion of a window. And again when when Scarpia asks Spoletta to shut the door so that his secret orders will not be heard by others, the orders of shooting Cavaradossi, just like with Palmiere... a simulated shooting. But the door opens by itself, but this being an opera one can't stop the action, the music, to shut the door. Luckily this audience was willing let minor fault be.

Not everybody applauded Maria Guleghina's Vissi d'arte, I did. Although she was not singing it all correctly, for me the most important thing was that she was in character and I thought it also was very beautifully sung. To hear a fault here you really needed to know your TOSCA.


2009-04-25 Tosca (G.Puccini), Wiener Staatsoper
Mario Cavaradossi = José Cura
Floria Tosca = Maria Guleghina
Baron Scarpia = Carlos Almaguer
Cesare Angelotti = Marcus Pelz
Der Mesner = Alfred Sramek
Spoletta = Benedikt Kobel
Sciarrone = Zoltan Nagy
Ein Schließer = Alexandru Moisiuc
Pier Giorgio Morandi, conductor
But if I start with the 1st act. Pier Giorgio Morandi was a wonderful conductor in this opera. We had an uncommonly short and thin Angelotti, but he had an imposing voice. I though they had really made Angelotti (Marcus Pelz) look that he had been in jail and suffers so much, getting skinny, so that it was not strange that Cavaradossi did not recognize him. The Sagrestano was Alfred Sramek who would have been perfect had he not so often "talked" to the audience. It was like very old school opera. But otherwise this was a more real Sagrestano and no comic figure. José Cura's Cavaradossi was much improved since last I saw him. He acted Cavaradossi who was a serious painter. Cavalier Cavaradossi is an aristocrat and Sagrestano is not, so in the time of the opera, Cavaradossi is not arrogant just aristocrat when he commands the Sagrestano "Dammi colori". A wonderful Recondita armonia followed. Then Cavaradossi and Angelotti met. It is so real that one understands Cavaradossi's reaction. Then finally, Maria Guleghina as Floria Tosca. Grand Duet, and it is truly magic In the end also Scarpia appears. Carlos Almaguer, imposing although not tall like Maria Guleghina or José Cura. This Scarpia is a power-house. Then when Tosca appears again, there is so much tension and wonderful acted (soft) confrontation between Scarpia and Tosca. Maria Guleghina is not only a great singer but a wonderful actress. A great Tosca. It was so lucky to finally have a Scarpia that was so right for the role.Carlos Almaguer, I have seen him before as Alfio in Arena di Verona, but this was really HIS role. BRAVISSIMI!!!!

Act 2: He is the perfect Scarpia still in this act. And that Maria Guleghina and José Cura would be wonderful also in this act was no surprise. The surprise was Sciarrone, Zoltan Nagy. Not so usual that one remembers him. But he really acted this person, a sinister police agent. When he stood in the door to the torture chamber he was like a statue, never reacting to Maria Guleghina's desperate Tosca, but only listening to Scarpia. So in this acting by Zoltan Nagy the story in act 2 was even more sinister and menacing. Tosca's predicament became even more desperate when turned to a human who had no soft spot like Zoltan Nagy's Sciarrone. I found Maria Guleghina's portrait as Floria Tosca to be the most real and her singing and acting was the closest to perfect I have ever seen. Of course, she was helped by having the perfect Scarpia, Mario Cavaradossi and Sciarrone. It always helps when one have the best colleagues.

Act 3: Alexandru Moisiuc, was the prison guard. He did well. José Cura sang E Luceven Le Stelle, wonderfully. Then Maria Guleghina came and it was a Grandissimo Duet. This TOSCA performance was so perfect that really moved me to tears many times.

The Verdict: The closest to perfection that I have ever seen.

Of course I waited by the stage door and I was lucky, I saw José Cura and Maria Guleghina and could take a photo of them, not together, alone. 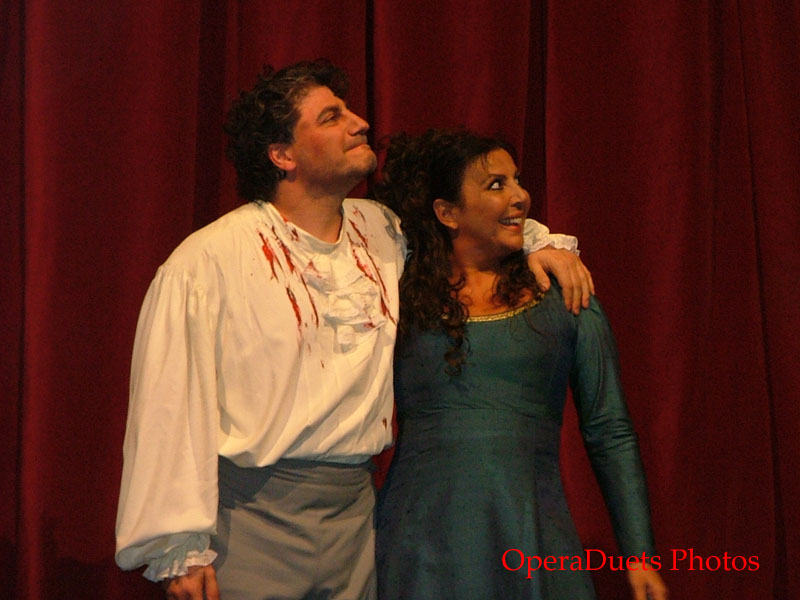 For more reviews from my travels, see www.operaduetstravel.com
Written by operaduets on Thursday, April 30, 2009 No comments:
Email ThisBlogThis!Share to TwitterShare to FacebookShare to Pinterest

3 days before Tosca in Vienna

This week I have begun to work again, half-time first 2 weeks. I got a cold and a cough last weekend. And a tooth-ache on last Friday, dentist appointment this Friday. Then I'll travel to Vienna. Luckily my cough is not so much in the day but starting as soon as I lay down to sleep. And I already have some difficulties in sleeping, thank you...

Tosca with José Cura as Cavaradossi. I hope this will be a great time. In 2001 in Zurich with Daniela Dessi and Ruggero Raimondi, a super cast, I did not enjoy it that much. In 2003 (Vienna) I had such pain in my arm (from falling badly in McDonald's restaurant but luckily my head missed some bad metal trays). Hard to enjoy the opera when almost all you can think is PAIN... Another Tosca in Vienna in 2007... but don't remember it as great.

But now it is Tosca with Maria Guleghina as Tosca and José Cura as Cavaradossi. I think it will be good, maybe even great.

For more reviews from my travels, see www.operaduetstravel.com
Written by operaduets on Wednesday, April 22, 2009 No comments:
Email ThisBlogThis!Share to TwitterShare to FacebookShare to Pinterest

For more reviews from my travels, see www.operaduetstravel.com
Written by operaduets on Sunday, April 19, 2009 No comments:
Email ThisBlogThis!Share to TwitterShare to FacebookShare to Pinterest

Her stepdaughter: Ricarda Merbeth as Jenufa 4.4.2009 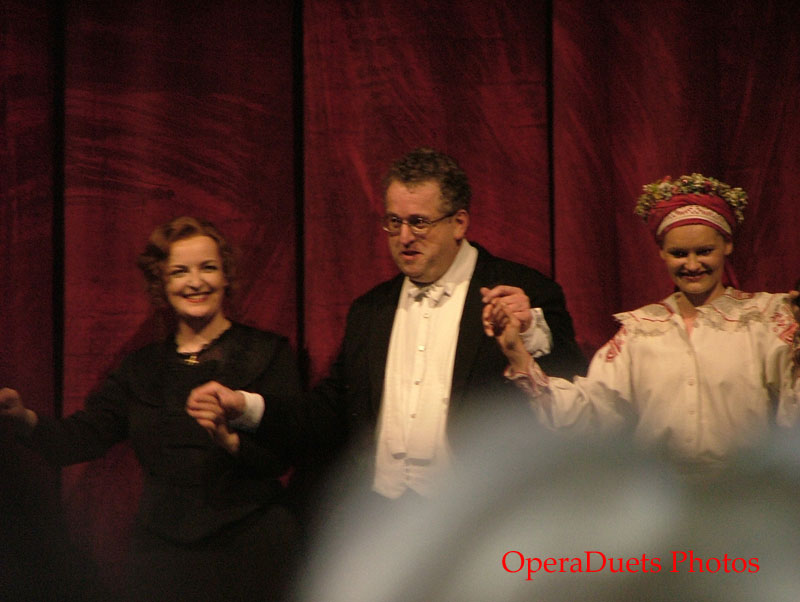 Agnes BALTSA even came out backstage and greeted her fans, and I got to talk to her.


The production is from 2002. Agnes Baltsa was also then Die Küsterin and Jorma Silvasti was Laca Klemen. That time Angela Denoke and Torsten Kerl were Jenufa and Stewa.. Both singers have blond hair. Ricarda Merbeth and Marian Talaba have darker hair. Why mention this? Well, not only is Marian Talaba underwhelming as Stewa Buryja but his dark hair undermines the mention in the text about Stewa's supposedly golden hair. Another thing is that all the other people except Küsterin and Laca have dark hair so how do one as audience understand who to look at. Lucky me, having seen this production before I knew where Jenufa would be. Others would not have a clue. And STEWA the big man in this village he looked just like anyone else. With Torsten Kerl, big and blond, he would always catch your eyes. And the maybe Torsten Kerl even has charisma that in my view was lacking from Marian Talaba. Talaba as Stewa was just a plumb, dark-haired man. With Stewa and Jenufa as both blonde-haired and fairer than all the rest, not only would the story be even more believable but also easier to follow.

Other than the lack of right color of the hair of the protagonists there was the orchestra that played wonderfully under conductor Graeme Jenkins but often too LOUD. I was in parkette. Did it sound better in other parts of the opera house? I don't know. But I know that there was exquisite singing drowned by the orchestra. Not all the time but still.. I think this was the best performance of Agnes Baltsa as Die Küsterin. I adored Ricarda Merbeth as Jenufa. Where Angela Denoke had been harder to swallow was Ricarda Merbeth pure vocal joy and wonderful acted too. Jorma Silvasti was Laca Klemen and he could dominate the scene, a man with brute force and with a Vulnerable soul was his Laca Klemen, the sound of his voice was wonderful to listen to, so delicate and pure and still strong, Janina Baechle who was like in 2006 Grandma Buryja was even better acting and sounding than in 2006. Marian Talaba was, unfortunately, a bland Stewa. He has the voice, but something else was missing. He was not helped by having become somewhat heavier in body. But Jorma Silvasti (Laca Klemen) is also a heavy-built man, but he has charisma and an instant-recognizable voice. But Marian Talaba is young, he might still become a wonderful Stewa... AGNES BALTSA was Wonderful as Die Küsterin. What an actress!! To see Agnes Baltsa as die Küsterin to be the strong and strict stepmother of Jenufa and then to see her being so totally broken by the heinous act of her murdering Jenufa's child with Stewa was great theatre. Her singing and acting was marvelous. But the orchestra played wonderful music often too LOUD.

For more reviews from my travels, see www.operaduetstravel.com
Written by operaduets on Monday, April 06, 2009 No comments:
Email ThisBlogThis!Share to TwitterShare to FacebookShare to Pinterest

For more reviews from my travels, see www.operaduetstravel.com
Written by operaduets on Thursday, April 02, 2009 No comments:
Email ThisBlogThis!Share to TwitterShare to FacebookShare to Pinterest