Summer days, travel to Barcelona and plans for my blog

Summer days are here. Not all good weather in Norway but still I should have written more on my blog. Anyway, now I am soon off to Barcelona. My parents collect all the news about the possible pandemic flu. And I was getting nervous for my Barcelona trip. It is only two nights in Barcelona and then home, hopefully with two wonderful performances of Turandot in the Liceu. First Maria Guleghina as Turandot on July 30, and then on July 31 with Fabio Armiliato as Calaf and Daniela Dessi as Liu.

Before Barcelona it is my father's birthday on July 29th. 81 years. Hurrah, pappa!!!

My father's day is the same as the only Norwegian Saint and so my dad share his name. Since Norwegians is traditionally Protestants (and so am I ), we only mention Saint Olav to be clever and show that Norway is great.

Plans for my blog: continue my series Opera vs. Reality, write more news items as I get them and more travel tips as I stumble in my travels. And maybe something more about myself that is not so opera/travel related.


For more reviews from my travels, see www.operaduetstravel.com
Written by operaduets on Tuesday, July 28, 2009 No comments:
Email ThisBlogThis!Share to TwitterShare to FacebookShare to Pinterest

Monday 13th July the ordinary ticket booking started in Zurich. Liederabend Agnes Baltsa, Elektra w/Agnes Baltsa, Nabucco w/Juan Pons & Maria Guleghina, La Boheme w/Jose Cura and Il Corsaro. That's all I bought. I almost typed the how much it cost me but the number shocked me too much. What is Mastercard for anyway?

November 28, 2009, I will be in Zurich for Il Corsaro. I am still thinking about buying ticket for the Agnes Baltsa Opera Concert in Vienna Konzerthaus on December 1. What should I do? Tell me in the comments, please.

For more reviews from my travels, see www.operaduetstravel.com
Written by operaduets on Wednesday, July 15, 2009 No comments:
Email ThisBlogThis!Share to TwitterShare to FacebookShare to Pinterest 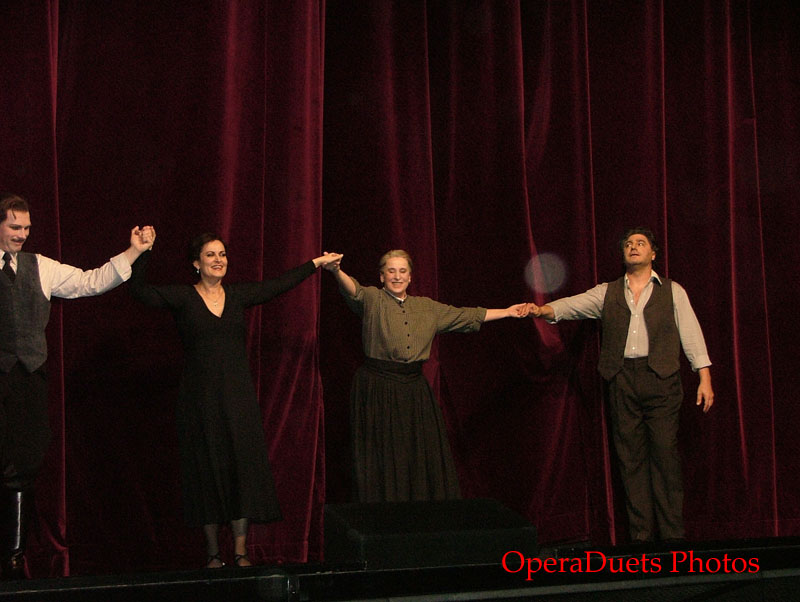 What have I learnt from travelling this year: Always look at where your hotel is, and whether the reception is open, HRS.de is very friendly and helpful when you want to change hotel (need to have their phone number, mobile phone is a must), Never take a taxi from the airport to the hotel (it is too expensive).

56 Swiss Francs to be exact. Taxi from Flughafen Zurich to Hotel Leoneck. In the evening. Yep. Walked a lot in order to "save" money.

So tuesday 7th: late flight with Swiss from Oslo to Zurich. Wednesday: first finding the way from hotel to opernhaus to collect my ticket, then going to Hauptbahnhof (HBF, main train station) and so back to my hotel. Breakfast at McDonald's. Lunch/Dinner at Chinese Take Away in HBF. Stomach ache, why? I didn't eat too much.. Any way, I had to take some pain killers (only one).

It was Real Verismo where every choir member had a role to play, nut as simply a chorus, but as real persons with their own individual lives. There were no masses, only individuals. Wonderful to see such attention to detail in an opera production. Paoletta Marrocu was Santuzza, I wish I could really describe how she acted and sang but nothing, except that she was Santuzza, really. Alfio and Lola, Cheyne Davidson and Katharina Peetz, was the good-looking and wealthy couple. Everybody in the village except Alfio and mamma Lucia knew about Turriddu and Lola. But wealth has it privilege, Lola was still excepted. Santuzza, not. Mamma Lucia, Cornelia Kallisch, was a much deeper role, more sympathetic especially in the end towards Santuzza. José Cura was Turriddu. He was great, even deeper understanding to the role. No wonder he was killed by Alfio, having been drinking a lot, and Alfio had not been drinking alcohol.

Pagliacci started with a disappointment. The Prologue with Carlo Guelfi (Tonio) was boring, and he was already dressed up as a Commediante player. It really made me think skip the prologue, let's have the opera allready. Finally it started. Again it was the attention to detail and that every person on stage had personality and a life that impressed me. Martin Zysset as Beppe was nothing special here, why? Was it that it was the last performance of Cav/Pag in the season. As he did not excell here, Beppe (Martin Zysset) was the clue that fitted all together. Gabriel Bermudez as Silvio was a real good-looking, muscular man. No wonder Nedda fell for him. Especially since this Canio was more of drunkard than anything else. But when José Cura plays the drunkard one does feel sympathy for him. No sympathy for Nedda, Fiorenza Cedolins, the adulteress. Shameless... And then how would one feel for Nedda, the character does not have a forgiving feature. Only in Genoa, where Nedda/Canio had a daughter this I feel for Nedda, Svetla Vassileva. And then Carlo Guelfi in the opera, was better than in the prologue...


After the opera it was Signierstunde José Cura. We could buy his photography book and a 3 CD-set (Aurora, Dvorak, Rachmaniov). And many photos was taken. For me, only 2/3 photos was good of JC, the room was full of people.


For more reviews from my travels, see www.operaduetstravel.com
Written by operaduets on Saturday, July 11, 2009 No comments:
Email ThisBlogThis!Share to TwitterShare to FacebookShare to Pinterest

We inform that José Cura's participation in the following concerts has been cancelled:

- Pula Arena Gala Concert, scheduled on the 5th of July 2009 due to technical and production problems caused by the breach of contract of the intermediary agency;

- Ohrid Colosseum Gala Concert, scheduled on the 12th of July 2009 due to the breach of contract of the intermediary agency.

We want to emphasize that the Artist, José Cura, is free of any responsibility and that he is truly affected by this event. In these sad circumstances, Mr. Cura expresses his great respect and consideration for the audience of these two concerts and for the people of Croatia and Macedonia.

We point out Cuibar Productions S.L.'s (Spanish company representing José Cura) continuous efforts to solve this problem until the last minute and we regret any inconvenience caused by a situation beyond our control.


For more reviews from my travels, see www.operaduetstravel.com
Written by operaduets on Saturday, July 04, 2009 No comments:
Email ThisBlogThis!Share to TwitterShare to FacebookShare to Pinterest