For more reviews from my travels, see www.operaduetstravel.com
Written by operaduets on Tuesday, August 31, 2010 No comments:
Email ThisBlogThis!Share to TwitterShare to FacebookShare to Pinterest


Who was André Chénier?
A French poet who was a revolutionary (a moderate one: a leader of les Feuillants) and he was executed during the French Revolution. Why? He was a moderate and he would write against not only the aristocrats but against the revolution leaders likes Robespierre and Marat and others. Hypocrisy and cruelty was something André Chénier fought against.

He was not only a revolutionary and a poet, he was one of France' best writers. He was a titan of poetry and knowledge. He had the disadvantage of coming from a not so wealthy family. His father was a too honest man to become very rich. His mother claimed Greek heritage. André's brothers was also engaged in the Revolution, except Constantin (b. 1757) who became a lawyer and worked for his father. Louis-Sauveur (b. 1761) had a career in the army. Marie-Joseph (1764-1811)  became a famous Jacobin. He was the official dramatist of the Revolution. He had a gift for making enemies where André had a gift for friendship. André-Marie Chénier was the 3rd son and was born on October 30th 1762 and he died on a scaffold on July 25th 1794.

The accusation against Chénier (the opera) and reality?

André and his brother Louis-Sauveur were both in Saint-Lazare prison at the same time. When André saw the accusation he saw it was a mix-up with him and his brother. To explain it would easily mean death for his brother and would probably not do him any good. To be a suspect and to have a suspect as brother would be worse. Louis-Sauveur had a soldier (general) with Dumourieuz. André was born in Costantinople and had been a soldier (a short while) and he was certainly a poet and had written against the excesses of revolution.


In opera we have usually a love story and Giordano gives us one with Maddalena de Coigny, the innocent Aristocrat daughter. The real de Coigny was Aimée de Coigny, duchessse de Fleury who was not so innocent. She was married into aristocracy and had many lovers. André knew her and of her and she was not his love interest. There was another lady who was his chaste love, one of his few chaste ones.

My source: André Chenier,  his life and work 1762-1974 by Francis Scarfe, Oxford University Press 1965.  Although the book is in English without good understanding of French it is not always easy to follow. It is written by scholar who is well versed in English and French poetry. The author quotes from letters and book in the original French. He does not use the space to outline in any detail what it means, so unless the reader understand French much goes amiss. Several poems of André Chenier is quoted in this book, naturally all in French.

BONUS: Did you know that Roucher in the opera was already in Saint-Lazare when André came and they where executed on the same day...

For more reviews from my travels, see www.operaduetstravel.com
Written by operaduets on Monday, August 23, 2010 No comments:
Email ThisBlogThis!Share to TwitterShare to FacebookShare to Pinterest 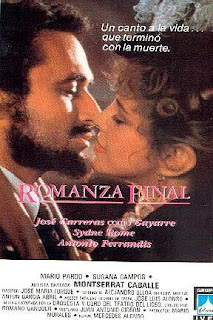 My DVD is a recording from Swedish Television where this Spanish TV series was sent. It was in 5 parts, each part lasted approx 50 minutes.

My recording is approx 225 minutes.

You can buy the movie then it is usually reduced to 125 minutes.

The Final Romance (or EN ROMANZA FINAL, in Spanish) is not the only movie about Julian Gayarre. Alfredo Kraus also made a movie in 1959.


For more reviews from my travels, see www.operaduetstravel.com
Written by operaduets on Saturday, August 21, 2010 No comments:
Email ThisBlogThis!Share to TwitterShare to FacebookShare to Pinterest

I should have started with no 1, but I starts with no 46. It was a surprise for me to love this music. It made me even thinking to buy the commercial DVD, My DVD is a copy from my recording from Swedish Television. It has an introduction in Swedish before each act. But it gives some expression of what you will see in this recording.

For a much better review, see Mostly Opera.

For more reviews from my travels, see www.operaduetstravel.com
Written by operaduets on Thursday, August 19, 2010 No comments:
Email ThisBlogThis!Share to TwitterShare to FacebookShare to Pinterest

For me it is simple: I am Norwegian. Born in Norway by Norwegian parent's and I still live in Norway as always have been.

Our birth place is one fact that cannot be easily denied. If somebody (famous or not) called one country their home then it would be most impolite to say that they are wrong.

I write about opera singers and I try to be correct in what I say so I often avoid the question of Nationality unless I really know it (from good sources).

For more reviews from my travels, see www.operaduetstravel.com
Written by operaduets on Tuesday, August 17, 2010 No comments:
Email ThisBlogThis!Share to TwitterShare to FacebookShare to Pinterest

For more reviews from my travels, see www.operaduetstravel.com
Written by operaduets on Friday, August 13, 2010 No comments:
Email ThisBlogThis!Share to TwitterShare to FacebookShare to Pinterest

LINKS to more information about this artist (agency, schedule etc.):
OperaBase
Website: www.albertogazale.com
(and he is on Facebook, too)


For more reviews from my travels, see www.operaduetstravel.com
Written by operaduets on Friday, August 13, 2010 No comments:
Email ThisBlogThis!Share to TwitterShare to FacebookShare to Pinterest

Dear readers, I am back

I have to apologize but I have started a bad habit. It is called checking Facebook. Didn't I promise never to get into Facebook? Well, it is too late now.

But now I am off for a while. I am planning a few posts but I haven't received the books and therefor not read them. Something about I DUE FOSCARI by Verdi and ANDREA CHENIER by Giordano will be up in the future. It will be in my series Opera vs. Reality.

But now I have to continue my ODT Singers list.

I am truly sorry for my laziness.

For more reviews from my travels, see www.operaduetstravel.com
Written by operaduets on Friday, August 13, 2010 No comments:
Email ThisBlogThis!Share to TwitterShare to FacebookShare to Pinterest

For more reviews from my travels, see www.operaduetstravel.com
Written by operaduets on Thursday, August 05, 2010 No comments:
Email ThisBlogThis!Share to TwitterShare to FacebookShare to Pinterest