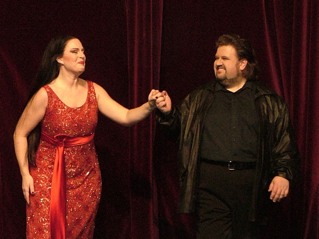 Written by operaduets on Sunday, January 22, 2012 No comments:
Email ThisBlogThis!Share to TwitterShare to FacebookShare to Pinterest

LA TRAVIATA by Verdi (only 5 times) 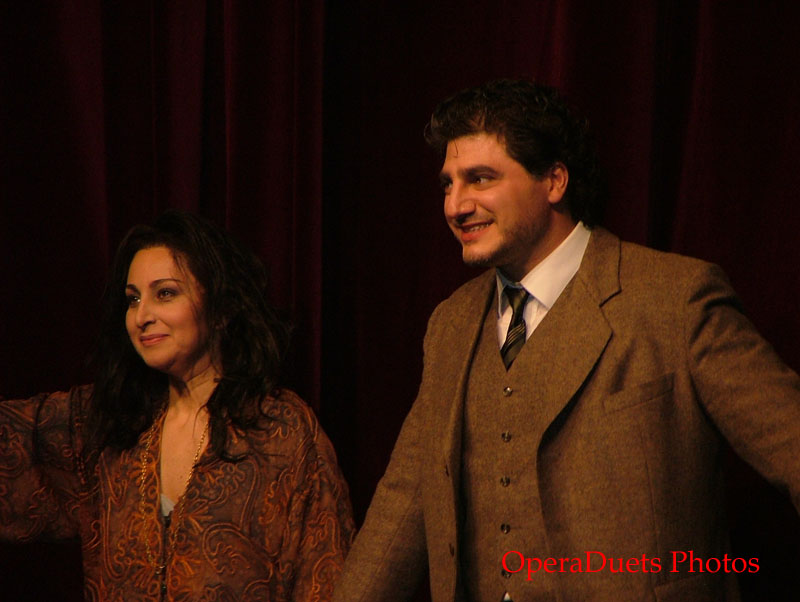 Why have I only seen La Traviata 5 times? Mostly coincidence, and it is not my favorite opera by Verdi even if it is almost every one else favorite opera.

La traviata is an opera in three acts by Giuseppe Verdi set to an Italian libretto by Francesco Maria Piave. It is based on La dame aux Camélias (1852), a play adapted from the novel by Alexandre Dumas, fils. The title La traviata means literally The Fallen Woman, or perhaps more figuratively, The Woman Who Goes Astray. It was originally entitled Violetta, after the main character. (wikipedia)

The double standard for men and women. A woman is ruined for life, a man is not.

For reviews from my travels, see www.operaduetstravel.com
Written by operaduets on Sunday, January 15, 2012 No comments:
Email ThisBlogThis!Share to TwitterShare to FacebookShare to Pinterest 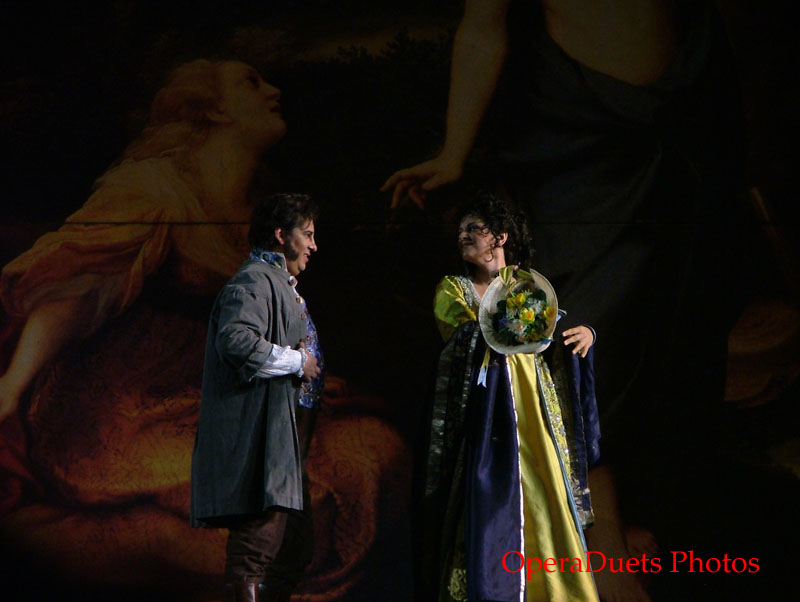 Written by operaduets on Sunday, January 15, 2012 No comments:
Email ThisBlogThis!Share to TwitterShare to FacebookShare to Pinterest

My first and only Parsifal was 10 years ago. So it is time to see it live sometime somewhere. And it was Placido Domingo as Parsifal on January 12, 2002 in Wiener Staatsoper. Naturally I have the CD with Placido and Jessye Norman. But I want a CD of the radio broadcast of Teatro Real's Parsifal from March 2001 with Placido and Agnes Baltsa. I was in Madrid in March 2001, could not record the radio broadcast because I was trying to get tickets for the performance and I am still angry with Teatro Real for making it so hard and then we tried the people outside the theatre and still, being first meant nothing.

Parsifal is an opera in three acts by Richard Wagner. It is loosely based on Wolfram von Eschenbach's Parzival, the 13th century epic poem of the Arthurian knight Parzival (Percival) and his quest for the Holy Grail, and on Chrétien de Troyes' Perceval, the Story of the Grail. (wikipedia)

King Arthur, Holy Grail. Parsifal is a quasi-Christian story. Kundry was cursed for laughing at Jesus and the cross. Parsifal is innocence that become wise through compassion. Kundry is the cathalyst for the chance but Parsifal does not have compassion for Kundry, a woman, only for Amfortas, a man. Gurnemanz is the voice of wisdom and compassion even towards Kundry.


For reviews from my travels, see www.operaduetstravel.com
Written by operaduets on Friday, January 13, 2012 No comments:
Email ThisBlogThis!Share to TwitterShare to FacebookShare to Pinterest

10 years since my first Nabucco 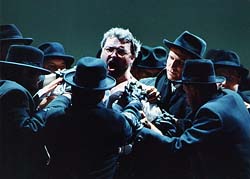 Opera by Giuseppe Verdi. Known as Verdi's 3rd opera and his first great success.   Nabucco, 9 March 1842. It has the most famous chorus by Giuseppe Verdi: Va, pensiero. The story is biblical and about the Babylonian King Nabucco.

It has the classical and iconic conversion scene of Nabucco. But I find the opera most interesting because of Abigaille, the supposedly eldest daughter of Nabucco. Unfortunately she is not so loved by her "father" as the "minor" Fenena. Abigaille is as fierce as Nabucco but she is in reality "a daughter of slaves" and therefore nothing more than a slave herself. Even Abigaille's love interest loves Fenena and rejects Abigaille. Abigaille just want to be loved, most of all by her father, Nabucco.

Naturally the opera is the bible plus more love and confusion so that it can it juice music.

For reviews from my travels, see www.operaduetstravel.com
Written by operaduets on Thursday, January 12, 2012 No comments:
Email ThisBlogThis!Share to TwitterShare to FacebookShare to Pinterest 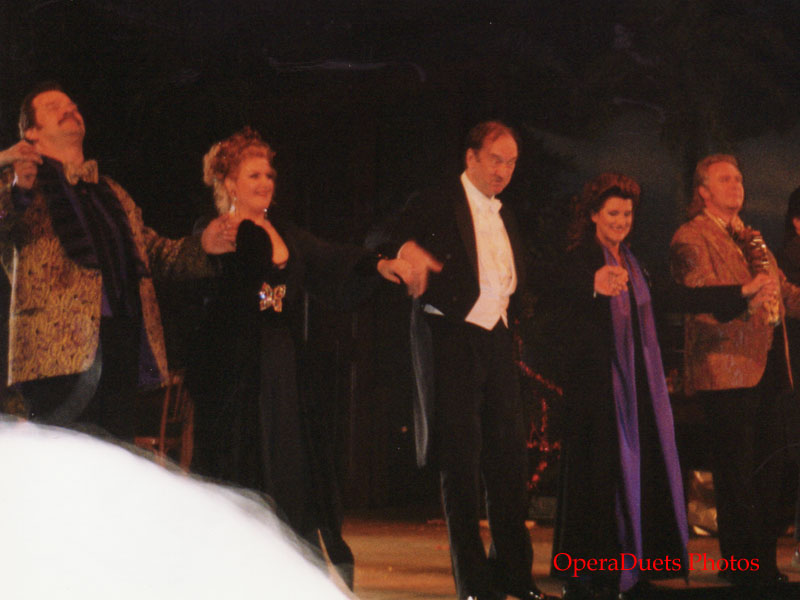 
New Years Eve Gala of Die Fledermaus (called The Bat, in English) with Guest stars as simultanious guests of Prince Orlofskys ball as it guests in the opera house. Wow!!

That can be fun. But what can make it boring. This is an operetta not an opera. It is meant to be like opening up a bubbly Champagne. It should sparkle all the way. Operetta is like superlight fun, but it sparkles best when there is some serious thruth down. Real people with problems but with a sparkling, witty dialogue and the sparkly operetta sound. With the right touch from the director and singers than can do the dialogue just right act 1 and 2 will go like a dream. Actually, even act 3 could be a ball. Unfortunately act 3 even if there is some great music and singing usually makes you want to go home.

Then there is the language. German in German speaking countries, yes, naturally. But elsewhere it is the question: Making it all in German (dialogue, singing), or singing in German, everything else in the native tongue, or all translated.

No wonder I loved it in 1999 in Theater an der Wien with Agnes Baltsa as Orlofsky and Isabel Rey as Adele, naturally it was all in German, and it had a very bubbly, sparkly quality.

But I do hate Frosch and his comedic monologue, don't you, too?

For reviews from my travels, see www.operaduetstravel.com
Written by operaduets on Sunday, January 08, 2012 No comments:
Email ThisBlogThis!Share to TwitterShare to FacebookShare to Pinterest

Here is my opera plan: 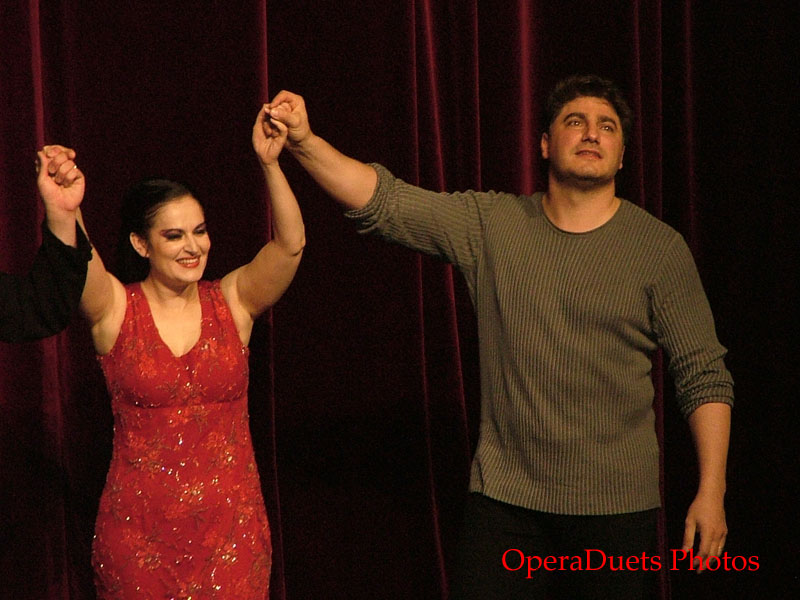 But it started on January 2nd with an ambulance tour to hospital where I stayed until Wednesday 4th. And now I am tired already. However, on January 21 I am determined to see Turandot in Zurich with José Cura and Isabel Rey (Liù).

My plans for my blog is to read interesting historical books that has something to do with opera, sometimes not much to do with  it, and tell what I think about it here on my blog. Naturally I will write my "opera reviews" and travel stories as usual. I have plans but I have my work, my disease and sometimes I have a bit of a fatigue, but I will be here. I hope I will be able to post somewhat regularly.

For reviews from my travels, see www.operaduetstravel.com
Written by operaduets on Friday, January 06, 2012 No comments:
Email ThisBlogThis!Share to TwitterShare to FacebookShare to Pinterest