Cheyne Davidson sang Paolo Albiani in stead of earlier mentioned Massimo Cavalletti. Cheyne Davidson and Giuseppe Scorsin sanf Paolo and Pietro. Something made me feel that they were not quite up to par. Paolo lacked his bite and bile. Pietro was a deep-voiced but no depth. Luckily they are not that important except that done properly they do give some extra depth to the story. Otherwise it would just be a family drama and not a political drama.

Placido Domingo clad in brown in the Prologue and he looked just like an old photo of Placido as Otello. So young he was as he lept on stage. And it was with Placido Domingo the opera really started to energize. Next energy burst came with Carlo Colombara as Jacopo Fiesco. The great Italian bass owned the stage during his great aria. Then two gigants Fiesco and Boccanegra, Colombara and Domingo, and wow, what an amazing duet. A duel between the fury of Fiesco and the compassion of Boccanegra.

Act 1 and finally Barbara Frittoli as Amelia. She was stunning. Her voice and acting was amazing. I found her jsut perfect as Amelia. Beauty and style in every ounce. Fabio Sartori was her lover Gabriele Adorno. (This tenor is not a thin man but for once the costume people had chosen cloths that looks good on the not-so-thin people. I hope this is a trend that one will create costumes that looks good on all body-types. But I fear this is knowledge that is forgotten, REVIVE IT PLEASE.) Fabio Sartori has a wonderful tenor voice and was an amazing Adorno.

And what to say more. Act 2 and 3 was wonderful. The sets are beautil and the costumes too. It is a stilistic Genoa we see with the blue sea in the background. During the duet between Boccanegra and Amelia I cried and the end made me cry too. I am sure was weepy during other times of the opera. For me it meant that this SIMON BOCCANEGRA was great. It touched me. Placido Domingo touched me.

For reviews from my travels, see www.operaduetstravel.com
Written by operaduets on Friday, July 13, 2012 No comments:
Email ThisBlogThis!Share to TwitterShare to FacebookShare to Pinterest

This time I had arrived the day before so I could have had enough sleep but my hotel room was towards the noisy street. I was lucky so early on Monday July 2nd I could change room. It was a smaller room but it was towards the quiet street. Anyway I got some sleep in my new hotel room, and after a shower I was off to get my ticket at the opera house and there I saw the program that Carreras was singing on the poster on the door to the opera house. 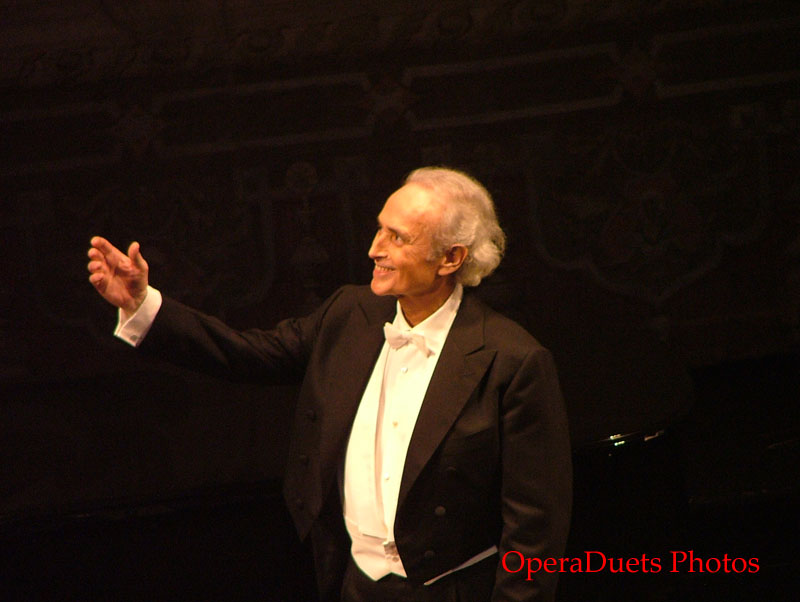 Opernhaus Zurich was full of people waiting for Carreras to win them over. And he did win. So in the end it was "never-ending" applause and then Standing Ovation. No Granada or L'emigrant as extra number but still, 4 extra numbers.

Carreras and Lorenzo Bavaj, the pianist, has worked together many times before. Lorenzo Bavaj played 3 piano pieces that showed him as a master pianist. With Carreras he is the loving and knowing accompanist.

During his first song, the prayer Pieta Signore, Carreras had to cough once. If I remember it right his was the only cough during the whole recital. At every 2 or 3 songs Carreras went inside for his glass of water (I believe that is his habit). Refreshed he came out to sing more. At this point of his carreer Carreras is mostly competing against himself and his own CDs. Pieta Signore sadly or happily served as his warming up piece and from there it was only getting better. From the first half I loved especially the songs of Bellini, they are favorites of mine, and Carreras sings them so well. From the second half I loved most the Spanish songs, El Arbol del Olvido, La Rosa y El Sauce and naturally, Del cabello mas sutil. I am not saying that L'oroneta or Intimo was not great, they were marvellous.

The extra numbers was great. Coren'grato was not a surprise as extra numbers and it is a song loved by Carreras and by the audience. Dicitencello vuie is a beautful song and we loved that too. Anema e core was a suprise and a happy one. Then came the song from the Pure Passion CD which I thought must be Tsjaikovsky but it was Richard Adinsell.


For reviews from my travels, see www.operaduetstravel.com
Written by operaduets on Thursday, July 12, 2012 No comments:
Email ThisBlogThis!Share to TwitterShare to FacebookShare to Pinterest