The strangest week of my life

On Saturday night (October 6th  2150 I was told that my mother had had a fall and she was sent to hospital. She had broken a leg, they thought. I did not immediately think to travel to my mother but as I put the phone down and looked around I just decided to go. After all my doctor had on Friday said I was well enough to go to work on Tuesday so I thought to myself then I will be well enough to take the night bus (7hrs with bus) to Oslo and from there to my hometown. It was all ready mostly from my hospital stay. I did forget to check how it would be best to travel from Oslo to my hometown so I did some not too good choices but it only meant I went to the airport when I should have taken the night bus to Oslo Bus Terminal. But it just added another train ride and then at Oslo Central Train Station I took the train home at 0720 otherwise I would waited until at least 11 to take a bus.

Sunday morning. My hometown is chilly. And I went Home and tried to sleep after a not so sleep-full night on the bus. Then I went to the hospital with everything I had taken with. Stupid, yes, but it made sense at that time. When my uncle phoned me that morning he was surprised that I was already at the hospital. And so I went to see my mother. First, I meet my aunt. She told me that my mother was very weak, had a bad cough but had not broken any bones in the fall in the bathroom. And so I saw my mother. I was just over a fortnight  that I saw her last. She was changed, she was more tired, weaker than ever before. We talked a little, my mother slept in between exchanges of words. I helped her a bit with the water glass and the yoghourt. I saw her struggle. My mother needed rest, to sleep, so my aunt meant it was better for me and her to go home with all my luggage and come back later. I went back Home. I relaxed as well as anyone with worries on her mind and heart. I went back for evening hospital visit hours 18-19. At 18 I saw my mother sleeping. My aunt was at home resting a short time for her vigilance towards her sister. I went down and sat in the hospital vestibule contemplating my mother and whether to go home. Luckily at 1845 I went up, I hugged my mother, told her Good-Night, my mother told me it was too hard to talk. When I went Home that night I did not know it was the Last Time.

Early Monday morning my aunt calls me that my Mother died this morning at 0520 (Oct 8, 2012). I knew it was coming, but I did not know. It was a shock. But I had something to be grateful for, 1 decision to take the night bus on Saturday, 2 the early visit on Sunday where I saw that it was better for my mother to be free from the struggle Life had become for her, 3 the late visit with the good-night etc. GRATEFUL. And naturally super grateful that my aunt was with my mother the moment she died. She and her husband have done so many things for my parents. From April 13th when my mother was told her cancer had spread until her death on October 8th they have been there for my parents. April 13th, 2012 was the day their eldest sister (died April 1, 2012) was buried and October 8th it was the middle sister death day. Now my aunt is the only sister left with 2 brothers. My aunt was handed papers to sign at the hospital and did much phone calls and official writing. And then my father was driven Home to get the news in a familiar setting instead  of at the dementia centre where he lives now. And then we met up with the funeral agent.

From Monday to Friday many phone calls to tell people about my mother's death. Naturally phone here and there to find out what should one really do and who and what to call. Many calls to cancel things.  But you know what, it is OK to cry on the phone and one often can do more than one think and luckily I am over 40 now so things does not scare me too much. You will be all right too, just welcome the help people offer. It can be nice crying together and sometimes laughing together because of memories. You will be all right and sometimes a mess but that is ok too.

Saturday 13th was a strange day because I had an opera ticket for I Capuleti ed i Montecchi by Bellini in Oslo's new Opera House. And it started on Friday with abdominal pains, and on Saturday morning it was certainly not better. I vomited at 0530 and the pain just did not go away, it came back with a vengeance again and again. But I had a visitor who was coming at 1230. First my uncle and aunt came, gave help, advise and so on. Then they left after all I would not be all alone someone would visit me. And then SHE came. We could just talk, but she noticed that I was not well so she drove me directly to the hospital. Naturally that was NOT the thing to do. First one must call the doctor and then get an appointment for the doctor in the hospital. OK my time was 1500 but luckily we did not have to wait that long. The friendly doctor was willing to try to get me into the hospital but he said he thought it was my mother's death that was my abdominal pain and if I just drank enough during the day and had soups and other fluids I would be better without a stay in the hospital. My painkillers was sort of working. I was in pain on and off but could function ok. After the hospital we took the round tour of our home town. Ended it with visiting my father at the demens centre. And so I felt well enough for an opera trip to Oslo. It was late and so in the end I took the latest bus that would be in time for opera. It was stress. The opera concertant was good. The Norwegian soprano was extremely good. It was OK. If my mother had not recently died it would have been wonderful. Romeo and Juliet was so far from my life that could not relate but that was good too, otherwise the opera would have been too powerful. After the opera I almost catched the earlier bus home. Still, I was in bed just before midnight. Strange day, strange days, strange week. I think 2012 is going to be a strange year for me.

Gratefulness is my blessing!!

For reviews from my travels, see www.operaduetstravel.com
Written by operaduets on Monday, October 15, 2012 No comments:
Email ThisBlogThis!Share to TwitterShare to FacebookShare to Pinterest 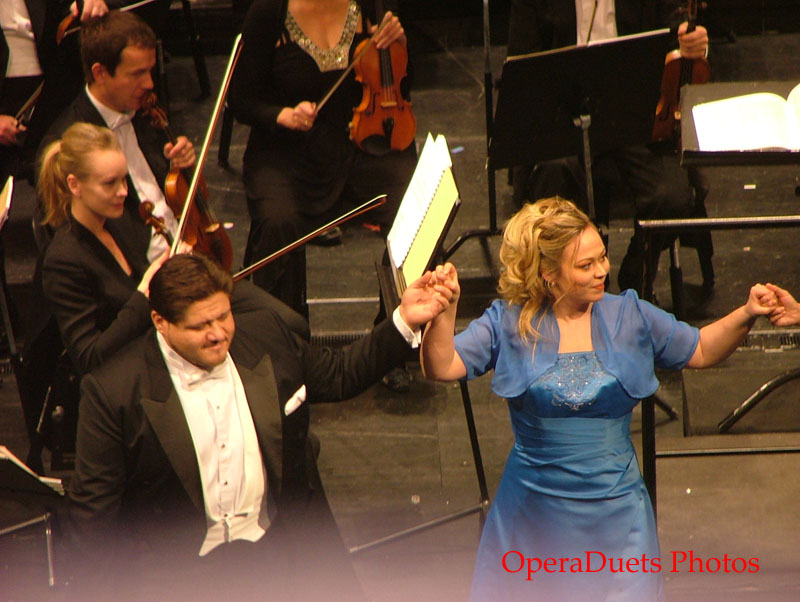 It was Vesselina Kasarova's debut in Oslo's new opera house, but it was Marita Sølberg's triumph.

It was strange being in Oslo for an opera. This was a concertant opera. But that was not it. My mother died early Monday morning. And now on Sunday this opera, I Capuleti ed i Montecchi, a Romeo and Julia story. My mother died of breast cancer. This time it had spread through her body.

I still liked Bellini's music and the opera, but I could not get into it. It was too far away from my life. Marita Sølberg was fantastic. Her voice is so warm and so she was the ideal Giulietta. Vesselina Kasarova is, of course, the famous Bulgarian mezzo, but I have never really warmed up to her. She was a teenage Romeo, walking strangely about. Her voice was more soprano than mezzo. Diego Torre was a wonderful Tebaldo. Loved his tenor voice. Magne Fremmerlid as Cappelio and Yngve Andre Søberg as Lorenzo are two amazing basses who sang well. The conductor Antonio Fogliani worked hard to get the right sounds from the orchestra. The chorus sang well. It would have been wonderful if it could have become staged this opera, but that was not to be this time.


For reviews from my travels, see www.operaduetstravel.com
Written by operaduets on Sunday, October 14, 2012 1 comment:
Email ThisBlogThis!Share to TwitterShare to FacebookShare to Pinterest