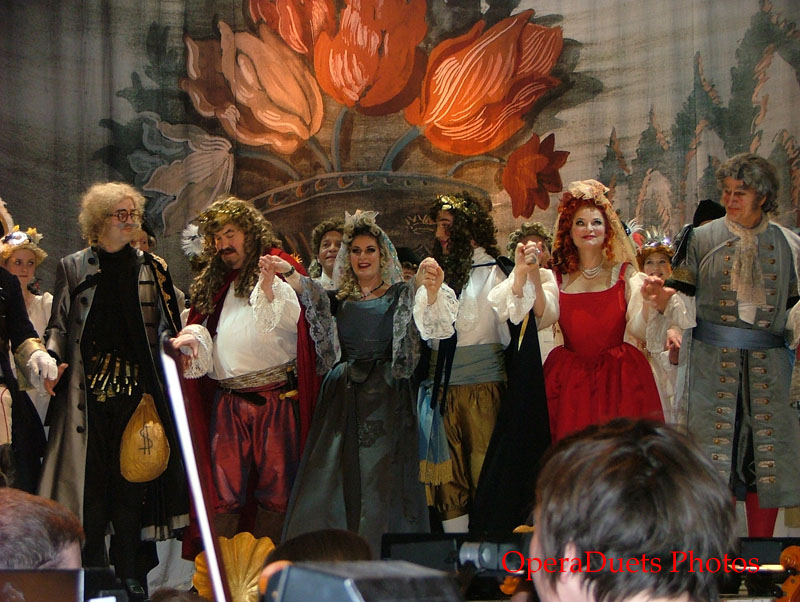 Un Giorno di Regno, or Konge for en dag in Norwegian, is simply Giuseppe Verdi's most wonderful comedic opera. It was simply the most fun you can ever have in an opera. The genius of Giuseppe Verdi together with Ronald Rørvik's Regie. It proved you can laugh so much and have so much fun your face seem  to have been massaged through and through. One can listen to the Philips recording with Jessye Norman, José Carreras, Fiorenza Cossotto and Ingvar Wixell and hear it is beautiful music but to really get into the fun one would need to go to Kristiansund and see Rørvik's production. On Youtube one can see parts of Parma's production with great singers but for the fun one would need the Kristiansund production.

The chorus was a great part of making this production so special. Every single member had their job and did it magnificently. It was beautifully done with a musicality that was amazing. A choreography that never felt forced and always seemed right. Everyone could act towards their strength. Whatever your body-type were or whether you needed glasses everything could be used to enhance the story. It was brilliant. That the beautiful and young man that was Belfiore, Lars Eggen, was simply made into just the right type for the fake King Stanislaus. Eduardo was sung by Kristian Krokslett, a chubby man that did not look like the young lover Eduardo. What a tenor voice and a true comedian!!! Of course this production worked even better like that. In an ordinary production. Both Belfiore and Eduardo would have been looked upon as miscast. But no, they were brilliant. What to say about the rest? Simply that they were brilliant. Itziar Martinez Galdos was amazing as Marchesa del Poggio. Anna Einarsson was simply beautiful in every way. And they could be serious and comedienne. Trond Halstein Moe was the most unhinged Baron Kelbar, simply genious. Sverre Johan Aal was a great La Rocca. Bravi, tutti!!!

Going to Kristiansund was easy. Coming home Sunday 17th was not. First the bus from Kristiansund to the airport did not go. So I had to pay 250 NOK for the taxi ride. Security and then waiting for the plane but it has landed in Molde. So an 1 hour trip with bus there. Then off to Oslo. In Oslo, walking hard to get my plane. YEP, amazing trip!!!

Written by operaduets on Monday, February 18, 2013 No comments:
Email ThisBlogThis!Share to TwitterShare to FacebookShare to Pinterest

My biggest disappointment was not that I still not like the tenor voice of Thiago Arancam. It was more the matter of the restaurant IL TENORE of Hotel an der Oper. After the opera, I had such pains and I was so looking forward to something to eat, a Pizza at IL TENORE. Maybe I had misunderstood the sign because it was closed. I though it had said that Saturdays it is open from 1800 till 2300. What really made it bad for me is that I called the reception of Hotel an der Oper because I hoped against hope that I might get something like a soup. My call was just put over to the restaurant (without a word to me) and the restaurant was just sourly telling me it is closed. I felt like they didn't care for me. So I am not going back there again.

Maybe I should have said that my biggest disappoint was that I was unwell and in pain most of Saturday. My pain left me without much sleep in the night, I woke up every hour several time an hour.

Already at Gardermoen did I feel unwell. But going back would still mean traveling for some hours so I thought it can't be that bad. I can manage. Of course, I can manage pain and traveling at the same time. I did not feel like vomiting then so I thought it would be OK. My 7 hrs with bus to Gardermoen had gone smoothly and now I had a plane to catch. It really was not that bad. On Munich Airport I felt that I had made the wrong decision. But the tomato soup at the Sportsbar was manna from Heaven and I could rest. After almost an hour resting I took S-Bahn to Marienplatz and 1330 I was in Hotel an der Oper and could relax in my hotel room. Great bed. I rested a few hours. In my sleep I had no pain. But then I needed something like dinner before the opera started 1800. The restaurants that carried food I believe my stomach can tolerate was closed, the heavy Bavarian restaurant open. So I went to BurgerKing to get a Chickenburger Menu. I could not eat the burger, I had some of the chips and I drank my Coke light. But that was no meal. Tomato soup would had been heaven for me. But no...

I certainly was not well when I came to the Bayerische Staatsoper for Carmen. But I had come so far. I could not go back now. I knew the Staatsoper production was beautiful and Carmen was Nancy Fabiola Herrera so what more did I need to make me go there. 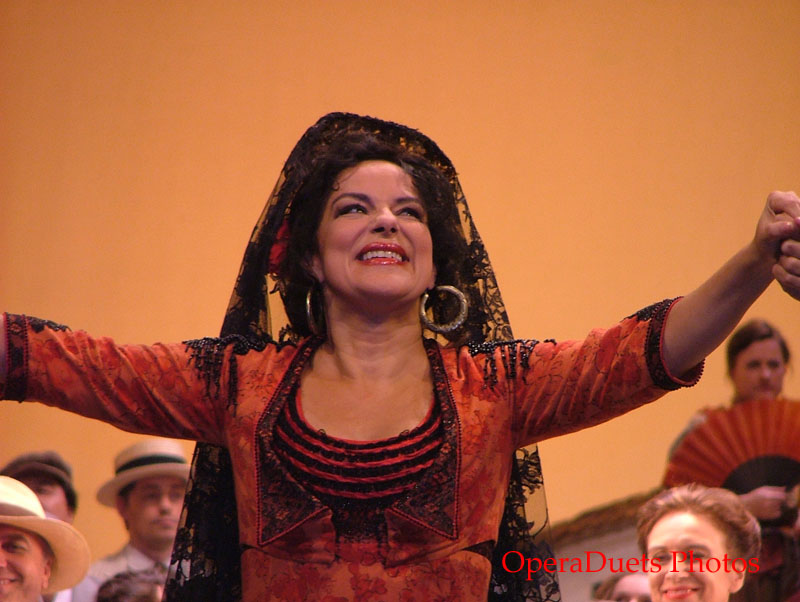 Thiago Arancam has won 3 Prizes of Operalia 2008 and audience in Munich loved him, just like the audience in Stockholm did. For me he does not have a great voice. Once he can sing all notes free and unguarded then I might like him. The way he sang ruined the flower aria for me, I could not wait for it to stop. The duet in the end was much better. He seemed freer and I could enjoy some if his notes.

Nancy Fabiola Herrera is the Carmen of our times. I have heard more exciting singing but she makes CARMEN totally Spanish. And I just love her interpretation. I just want to shout Viva España!! Viva Nancy!! BRAVA!!!!!!!!!!!!!!

Vitaliy Bilyy was superb as Escamillo. His looks, singing and acting was superb! It seems to be hard to find a great Escamillo these times. But now he is found and the perfect Ecamillo is Vitaliy Bilyy!!!!!! BRAVO!

Aga Mikolaj was Micaela. Her French was not that good (like Arancam whose French was...), but all could be forgotten. She was a marvellous Micaela. BRAVA!!

Had I been well then I would have stood waiting at the stage door. But I hasted to my hotel in the belief that IL TENORE would be open and I could just simply eat my pizza and then go to sleep. After a perfect (or so) Carmen that would have been the perfect end. But... I was DISAPPOINTED. And hurt. I had to lay down in my bed just to find the strength to go out. I felt really ill. But I only had me. I did not feel like trying all those restaurant. So I went to McDonald's, I ordered a Chickenburger and a big Cola light. The man in the reception seemed to snicker to me. I know you can't see I am ill when I am ill but still able to stand and go. But still... It hurts. I simply could not eat the burger, I was too ill. The cola light was a life saver during the night when I though I might vomit and I woke up too many time to even count. But I slept 10 minutes here and there. My mouth was often almost to dry for me even to take a sip. I was very lucky, at 0730 when I stood up I still hadn't vomited and I felt much better.

Sunday was then day to travel home. But I was much better. Even if still sometimes when I walked pain would just wash over me. I walked slowly but steadily. From Marienplatz I took S1 instead of S8 (that I had taken the day before). It travels in another direction but ends in the Airport. Suddenly they announce that the train is not going to the Airport but to Freising. So it was not enough for passengers to go back in the train but it seems the whole train was going to Freising not just the front part. So there we were waiting at Neufahrn. It was snowing and cold. Finally our train came. But I was much better so it did not bother me too much. Then we arrive the airport. Security check and soon I could enjoy my tomato soup at Dallmayers before my flight. I did not mind that it was delayed but staying in a too hot plane waiting was bad. Finally we could leave Munich behind and soon it was Oslo Airport Gardermoen. I managed to book my flight home while taking the bus in the airport. I ordered a Cheeseburger to carry with me. The time was to narrow for me to eat it there so I warmed it up when I came home at last.

I decided not to go to Madrid for the zarzuela next weekend. I am cool with that decision. I have decided next time I am going to Spain I will take it more leisurely. Maybe not go in the Winter season.. but Summer might be too hot.


For reviews from my travels, see www.operaduetstravel.com
Written by operaduets on Monday, February 04, 2013 No comments:
Email ThisBlogThis!Share to TwitterShare to FacebookShare to Pinterest