A long day to Vienna's Chenier, pain in Paris then Gioconda (the tale of two operas May 16-17)

After "sleeping" in the night bus I arrived at Gardermoen airport 0515. My plane to Vienna left at 0640 and I arrived in Vienna 0910. Of course I arrived in the airport not directly to the city. I was still surprised of the new modern look of the refurbished airport. It is so modern that it still confuses me. But I found the McDonalds and had my breakfast there. How different it is to fly with Austrian than with Scandinavian. With SAS you buy expensive and still the food is crap unless it is Muffins then it is eatable. Austrian free food and drink and it is great. I Love Austrian.

Then I took the CAT (City Airport Train) to Wien Mitte and then to Westbahnhof where I looked at the hotel that I thought I would stay in even though I was going to take the train to Zurich/Paris directly after the opera. But the late check-in (1500) and so I saved 45 Euros. Then back to Westbahnhof and that too was mightily modernized, so much bigger, and seemed all new even those parts I recognized from previous visits. Found WC finally, and a McDonald's. I could relax in really amazing chairs. Loved it. Later I came back to Westbahnhof and McDonald's to eat too. But still my opera, ANDREA CHENIER, was hours away and I was tired. So tired that I thought I might fall asleep in the opera house during the opera. Oh no!!

What to do in Vienna? I was in Kärntnerstrasse and Graben and could naturally have bought a lot of things if only I did not have to carry all my baggage around with me. Why didn't just use the lockers in Westbahnhof? The answer is those I found was not in use. And then I found no more. But I went to the restaurant Firenze Entocha  and had something there. A cold something just because I thought I had opened the menu and that was all they had. I could not believe it. Why was all the other folks getting dinners there and I... Then after my meal, the waiter showed me the full menu but so expensive to I said no. Expensive salad but the chair was wonderful. I wanted to stay in that chair for hours. But I had to pay and go.

So back to my pizza restaurant in Kärtnerstrasse and I chose a modest meal of creamed tomato soup. And it was OK, but not fantastic like the one in Munich Airport or in Torino or Genova. It was OK, I did not have to be hungry. And it was nice. I was one of the few inside, the rest of the guest was outside. Too crowded for me. The chair was alright not a place to stay a long time. Then off to Staatsoper and to the opera shop there. And there I met other Cura fans and friends. And we had something to drink at the opera cafe inside the opera. Then it was time. OPERA. Ah, finalmente!! 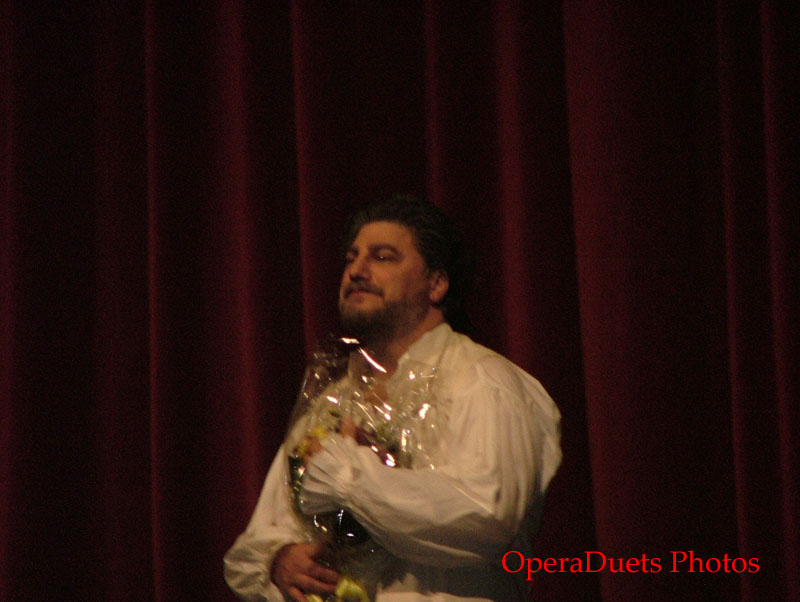 I did not have to worry about falling asleep. I was wide awake. José Cura was wonderful as Andrea Chenier. Marco Vratogna got better as Carlo Gerard during the performance. Martina Serafin was a bit subdued as Maddalena di Coigny (it was her role debut). Alfred Sramek was a great Mathieu. Marco Armiliato is a great conductor.

So it was great. So I had a train to catch so I could not wait for the artists to come out as I usually do. But that was OK. I have so many photos of José Cura and still to stand and wait is not my favorite pastime. So Off to Westbahnhof. I found my train, and I found my liegewagen. Then I was reminded, I was to have the top bed. Luckily my 6 bed cabin was just 4 this time. So no 26 was just as high as 24 should be. And I was able to sleep, yes, actually, sleep, there. My body seemed to have a natural resistance to falling out of this bed. And so sleep and in the end we were just 2 people in the cabin.

And then suddenly Zurich, after waking up and sleeping several times. Well, 6 in the morning, wake up and breakfast. 0720 in Zurich and the next train to Paris 0735. Found my sleep and could relax. And it was National Day of Norway, May 17th when I first felt the pain. But did it happen on the train. No I don't think so. I found my hotel nearby Gare de Lyon. In Paris I was not well. I could not eat much and I had some abdominal pain. I also had started coughing,. That started in Wiener Staatsoper when they release some chemical fog or something. And it got worse. In Vienna I was able to stop my coughs but in Paris Opera Bastille I was not that lucky. And I was in pain. Worse it was that during act 1 I had "the accident" and then I had to wait for the ladies room to be ready. Luckily I had all what I needed in my purse. And no spill on my cloths. Maybe it was then I knew I was indefinably not well. 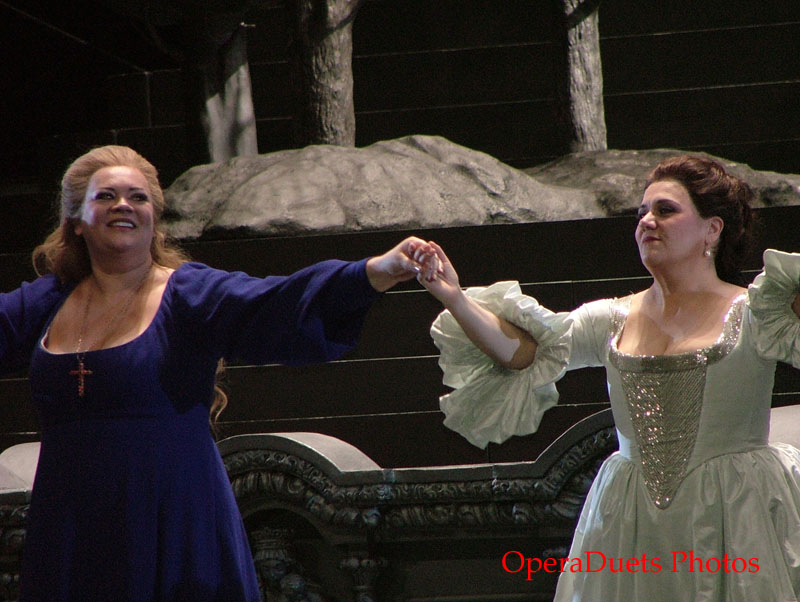 Violeta Urmana as La Gioconda and Luciana d'Intino as Laura Adorno. Two singers I have often wanted to really love but found it hard to do. AND so in LA GIOCONDA they were both in the role of the their life. To hear their duet, oh, it was pure magic. Violeta Urmana, I thought I could never love you after you changed fach from mezzo to soprano, you were divine as La Gioconda. Luciana d'Intino, I finally do absolutely love and adore you. Laura, Laura, sei tu!!

Maria José Montiel as La Cieca. Amazing. Wonderful. The singing, the acting. BRAVA! A giant at the stage. Truly with you as La Cieca, La Cieca is one of the major roles in La Gioconda.

And poor me. Not well. My pain is overwhelming. No opera longer to hold it down. I cannot wait for the singers and would have loved to wait if only I was well. Back to the hotel. A good night sleep with enough pain and wake ups to almost undo the good night sleep. Then the bus to the Charles de Gaulle airport. Up 0700. Bus left 0725. One hour on the bus. Then 1100 plane to Oslo. It arrived 1300. I ate at the airport. And then an hour later off to Kongsvinger. When I needed to go home, 7 hrs with bus, to the tablets I though I would not need in this short visit abroad. But I had promised to meet my father and aunt and uncle to decide the grave stone for my mother. The parecet tablets was hardly working. Duty calls.

Then back to Oslo and to my night bus. 7 hours on bus. We are just a few persons. It is quiet until at 04 in the morning when 2 women decides that they don't need more sleep, since they are just one hours from home. I wanted to sleep but the talking, and not softly, and laughing, loud, kept me from sleeping more. And worse, I started to feel sick like I was going to vomit and yes, as soon as I was home I did. Vomit. And I was not lucky like those time when it did not taste anything. Now I had that foul taste, too. And such pain. I slept, or tried to sleep in my bed and the I just made my sofa my bed instead. Finally on May 19th I could take my 20mg prednisolon and my Scheriproct through my stomi opening. Night to May 20th started with pain so great I thought that I would have to go to hospital again. But now it is 1242 on May 20th and I feel the pain is going away, the medicine is working. No hospital visit this time!! Hurray!!

For reviews from my travels, see www.operaduetstravel.com
Written by operaduets on Monday, May 20, 2013 1 comment:
Email ThisBlogThis!Share to TwitterShare to FacebookShare to Pinterest

I have digital camera now and I think my seat is closer.  And then off to Paris. LA GIOCONDA by Ponchielli in Paris. First time. ANDREA CHENIER by Giordano in Vienna. Not my first time. VERISMO!!! 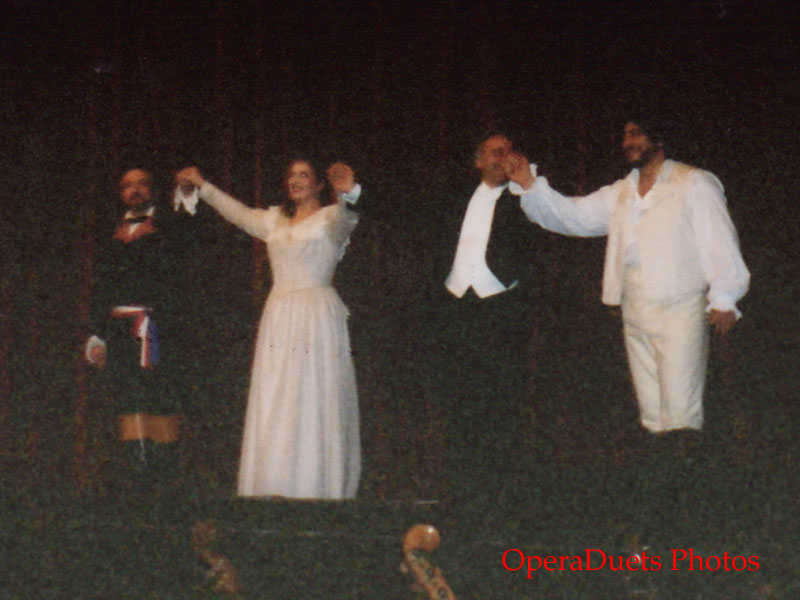 For reviews from my travels, see www.operaduetstravel.com
Written by operaduets on Tuesday, May 14, 2013 No comments:
Email ThisBlogThis!Share to TwitterShare to FacebookShare to Pinterest

Home again on April 29, then suddenly May

From Barcelona to Oslo via Zurich. That was 5 hrs in Zurich. And then in Oslo, just in time to get the plane home. BUT my plane and another plane had met some lightning so we had to wait to get a new plane. So in stead of leaving from Oslo 1955 it became 2115. So late in evening/night and I was home. On April 30 I had to go to hospital for a talk with my doctor. And so suddenly April was over.

May came with rain, snow and wind. When will spring arrive? In Frankfurt it had been sunny and 20 degrees. In Nice/Monte-Carlo I had lots of rain. In Barcelona it was cold as in Norway and some rain. April = Viva Verdi (Rolando Villazon Frankfurt, Stiffelio Monte-Carlo, Viva Verdi Barcelona)

May will be my Verismo month. Andrea Chenier in Vienna with Jose Cura on May 16, La Gioconda with Marcelo Alvarez in Paris on May 17th. I just have to be un-sick enough. Healthy would be nice. :-)

For reviews from my travels, see www.operaduetstravel.com
Written by operaduets on Sunday, May 05, 2013 No comments:
Email ThisBlogThis!Share to TwitterShare to FacebookShare to Pinterest