Summer Holidays are over and I am in pain

I loved my summer holidays. It was very hot but I was OK in Paris, Italy and Spain. My latest travel to Spain was via Frankfurt both ways. But on my travel i had to stay overnight in Frankfurt so I had to take one more day off. No problem usually, but on Monday I was not feeling too well. Then when I came to the airport I was in more pain  but not too bad. On the plane I feel pain in my stomach more and more. As we approached Gardermoen I was sitting bent down. This whole thing was not help by my plane being late. 1 hr later than expected we landed. I had to wait for my luggage in Gardermoen. I was so sick and it seemed that all aiplaines was using belt nr 6. It took an hour before my luggage was there. I was sitting there trying to see my luggge on the belt through all those layers of people. The luggage people was carrying was so much, it was extrordinary.
I vomited. Felt a bit better then. A person gave me aiport plastic bag. And as I was vomiting in the bag people was often trying to just walk over me. It was so filled with people, old, young, children. Happily the people was not loud. Loud would have been hell. Finally my luggage came, then I wondered If I would be ble to just walk with all my luggage. I was so tired that I almost cried when I bought my colas, i forgot that as I was sick and likely to vomit I should have bought the original red coca cola, the one tht helps when you are sick. I bought light og Zero, my brain was not completely on.
Then I sat down in a cafe/restaurant. They noticed I was not well and since Gardermoen does not have a nurs og doctor but they have police. So the policemn asked me question, then he made sure that a nurse in the amt centrl got my phone number and we could talk. Then ambulance was coming but instead it was a more normal emergency vehicle where I had to sit and be taken to the closest doctor center. Blood sample was taken, and then an ambulance came and I was sent to closest hospital, Akershus University Hospital. The next morning I was well enough to go home. Better, able to walk easily and pain almost over. Anyway, holidays was over, I had to go to work and if i needed Hospital Time it would be better if it was closer to home, with people who knows me.
Bus from AHUS, then train to Gardernoen and flight home because 7 hrs from Oslo and homd would be more than I can take.
One night I had such and even with extra pain killer, no sleep. I am still in pain, just on and off. But it is hard. I have to talk to my doctor, should I continue with pain killers (need an upgrade), or do I need to go to hospital (again, and it is so boring).
Written by operaduets on Sunday, August 09, 2015 No comments:
Email ThisBlogThis!Share to TwitterShare to FacebookShare to Pinterest 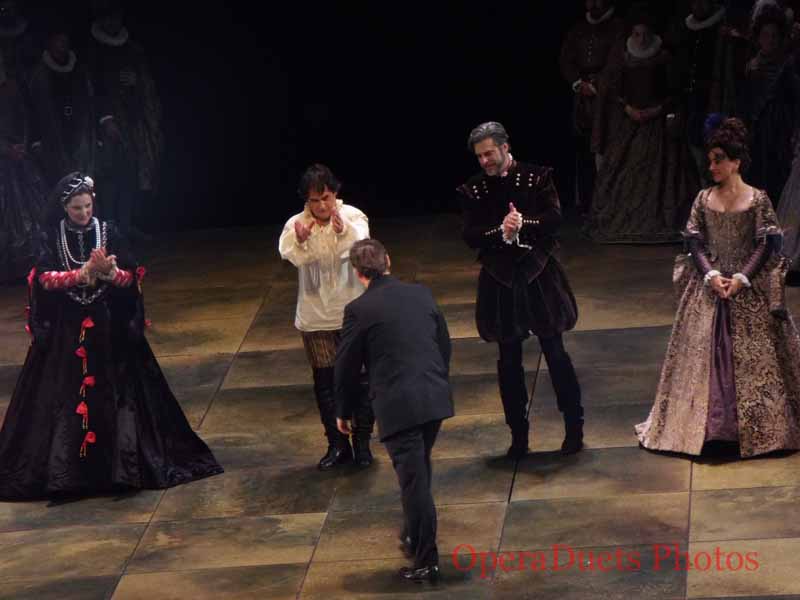 So the idea of Albert Boadella was create a more historical correct Don Carlo by Verdi. So he starts off with putting up the the opera in El Escorial. Escorial is after all mentioned in the opera but non of the action is set there. The places in opera is San Yuste monastery in Extremadura, the Royal Palace in Madrid and in the Queen's Garden there. Outdoors in.a Plaza in Madrid for the auto-da-fe and a prison. The opera is played in the hyper-modern Theatre Auditorio in San Lorenzo de El Escorial. The royal building and monastery called just Escorial in the opera is just some hundreds of meters of The Theatre. El Escorial is a big area with several villages and it an hour away from Madrid.

To make the opera or indeed Schillers play more historical is not easy. Historical correctness was not really something Schiller or later the librettist cared too much about. Schiller did try to get the History Right but in the en it was more important to get the drama right, a compelling story. Lucky as the drama was made into an opera it got a better structure and is much more compelling. Historical it is quite false especially the idea that Don Carlos, Infante of Spain and Elisabeth de Valois was ever in love with each other. But first it was Don Carlos who was going to marry Elisabeth. But then it became obvious that Don Carlos was not the right person and the alliance between France and Spain could only be strengthened by the French King's daughter marry the King of Spain, not just the heir of The Spanish throne.

One of the most interesting conflicts in the opera is between the throne and the altar. How long must the throne bend before the altar. In reality Philip 2 of Spain supported Inquisition fully. Assumed guilty was the King's idea of justice. There was conflict often between The king of Spain and the Pope. Philip believed himself closer to God than the Pope. The Pope was not just a religious leader at this time but a sovereign that often went to war and not always for religious reason. Philip made everything for God. The only acceptable faith was the Roman Catholic faith and that meant all Spaniards should follow Philips. Philip was King, Prophet and Priest, and naturally best pals with God. He often made decisions with the firm belief that God would perform the miracles Philip needed. Europe's history might have seen most different if Philip had been more of a realist than a fanatic.

Don Carlos and Elisabeth de Valois was the same age and died in the same year, a terrible year for poor Philip. The only woman that Don Carlos respected and never was uncivil towards Elisabeth. Maybe Boadella was right that Don Carlos loved Elisabeth with an infantile love. There was nothing in Don Carlos to compel Elisabeth to fall in love in, but there was reasons for compassion.  The marriage between Philip and Elisabeth was a happy one. She was his third wife, his second marriage with Maria Tudor of England had not been a happy one, so Philip was devastated when she died because of childbirth. To loose the heir of a kingdom is always a disaster and Philip never wanted Don Carlos dead even as difficult he was and in the end Philip could no longer delude himself that it would be a good idea to have this strange, dangerous person on the Throne of Spain.

The idea of Rodrigo of Rosa is a creation of the times of Schiller who wrote Don Carlo also as a commentary of new idea in politics in Germany. The idealism of Rodrigo does not belong to the century of Philip 2 of Spain. In El Escorial Don Carlos was played as a hunchback with a lame leg and with many nervous ticks. Still someone to trust to change the life of all in the Netherlands. Maybe it was then. The truth about Don Carlos is that he looked at Netherlands and wrote letters to leaders there as he was on the way to treason, and later he attacked his father with a knife or tried. It was popular to tell that Philip killed his son (it was a Protestant rumor). Later a former secretary of Philip, who had managed to run from Spain to England with Death sentence on him. This Secretary Perez had some underhanded affaire with the Princess of Eboli, so he started another rumor that Philip and had an adulterous affair with her. The Princess was dead by that time.

I had come to El Escorial to see an extraordinary Don Carlos but I had seen almost every new thing before. The singing was excellent and the orchestra too. It was a little too much to hint as Elisabeth and Carlos had been childhood friends in the figurines. Eboli looked like historical Eboli with her eye patch. Elisabeth de Valois looked like her historical portrait, same with Philip II but Don Carlos looked too mature but sounded young enough. Don Carlos was unattractive buy the voice was divine.

This was the 4 act Italian version played in the 3 pieces. I love this version but then Rodrigo dies, LACRYMOSA. Until Lacrymosa we have drama going on and working wonderful but then we have "the wonder father-son duet". But it is so illogical and it doesn't fit. Drama just stop up, hi belcanto for no reason, and the scene with fizzles away.

Written by operaduets on Sunday, August 09, 2015 No comments:
Email ThisBlogThis!Share to TwitterShare to FacebookShare to Pinterest