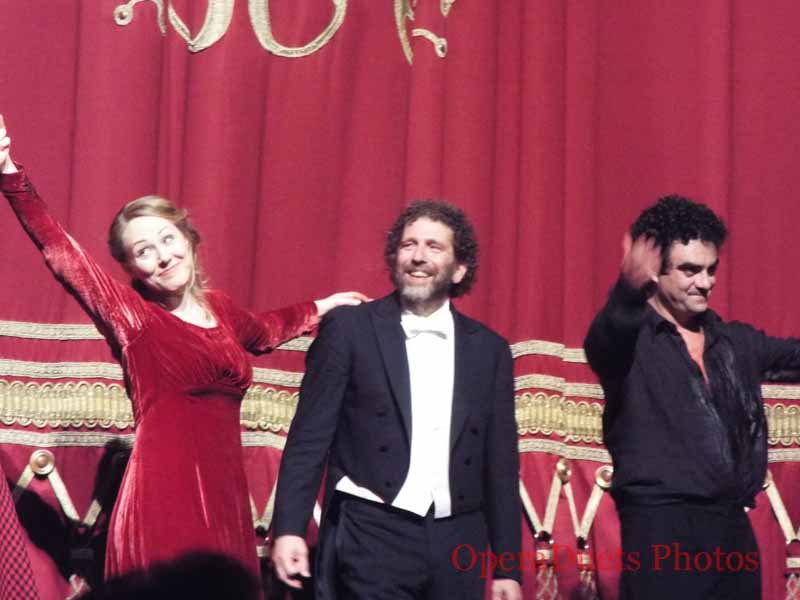 I believed as I was sitting in Nationaltheater, Munich, that at home I have a DVD with this same production but from Vienna. The reality was that I was in Munich for premiere in 2006 with Sophie Koch and Marcelo Alvarez and that Vienna and the DVD is another production. Stranger still that even with booklet showing Koch and Alvarez I did not remember that I was there for the premiere in Munich.

Werther in Vienna had really set its mark on me and the Munich production had vanished. Marcelo Alvarez was amazing and so was Sophie Koch. But that was 2006 and now it is 2015 and it is Rolando Villazon and Angela Brower. Earlier this year I saw them as Hoffmann and Nicklausse in Les Contes d'Hoffmann and they were absolutely marvelous.

Rolando Villazon is an amazing actor and has a wonderful tenor voice but this day (2015-10-25) his voice would not always come out the right way especially in the higher notes. It was painful to hear his voice "glitch" but always he was Werther. Angela Brower was Charlotte, a woman who is full of life but unfortunately she has promised to marry dull Albert. Her sister is also in love with Werther but she also seem to genuinely like Albert where Charlotte has to struggle to be accept being near him and dislikes to be touched by Albert. Solution Charlotte should have married Werther and Albert could have Sophie. Probability higher for happiness for sure.

This production of Werther made it into 1940-60s or something. It was just an update that gave us nothing. Werther is always writing and in the middle of the scene is a big stone and there is Werther's writing desk. Always is the production trying to remind us that the original novel was a novel made of letters from Werther etc (I haven't read the novel by Goethe). The walls are filled with the scribblings of Werther. But what does that give us, the spectators. The revolving stage is used too much and means seldom much. Only as we see Charlotte desperate to come in time to save Werther is the revolving stage used to help us see, the stage going in the wrong direction this we see Charlotte struggling and it gets real for use, too.

In the personregie it is much better. One can believe this people. The children are adorable and this time the father is played as one who are their loving father and not just a father who lets his oldest daughters to be the parents. This children already have one parent even though they have lost their mother. The two elder sister are helping out. Albert is nice enough but he wants Charlotte to just say she is as happy as him, he does not want the truth. She never wanted him but Albert understand Charlotte so little that he thinks that if Charlotte loves another man she would naturally be unfaithful to her husband. Albert and Werther, i do not understand them, what a weird friendship.

Written by operaduets on Saturday, October 31, 2015 No comments:
Email ThisBlogThis!Share to TwitterShare to FacebookShare to Pinterest 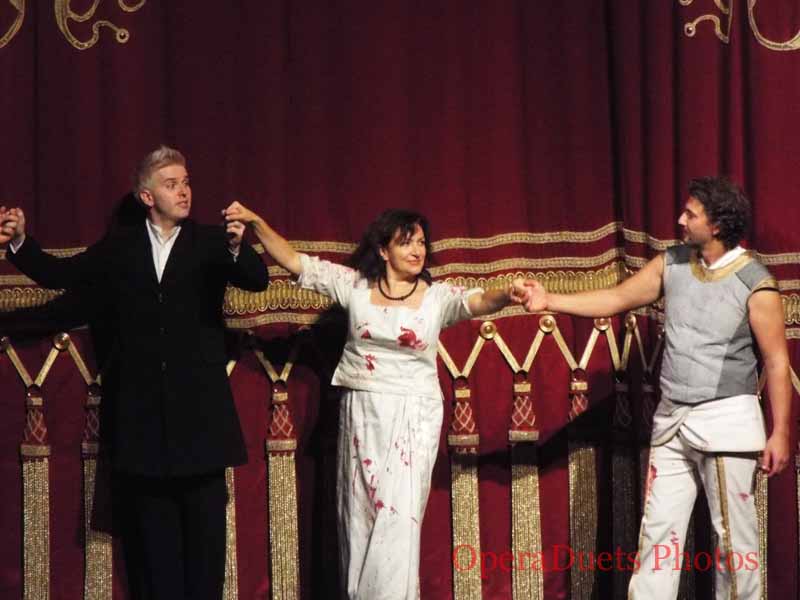 2015-10-04 Aida (Verdi), Bayerische Staatsoper, Munich
Amneris = Anna Smirnova
Aida = Krassimira Stoyanova
Radamès = Jonas Kaufmann
Ramfis = Ain Anger
Amonasro = Franco Vassallo
Der König = Marco Spotti
Ein Bote = Dean Power
Eine Priesterin = Anna Rajah
Dan Ettinger, conductor
Bayerisches Staatsorchester
Chor und Extrachor der Bayerischen Staatsoper
Inszenierung - Christof Nel Konzeptionelle Beratung - Martina Jochem
Bühne - Jens Kilian
Kostüme- Ilse Welter-Fuchs Choreographische Arbeit- Valentí Rocamora i Torà
Licht - Olaf Winter
Chöre- Sören Eckhoff
Dramaturgie - Olaf A. Schmitt
Since the Puccini album with the Dr House lookalike Jonas Kaufmann I call him Dr House.
Jonas Kaufmann is a great actor but... he is supposed to be a tenor, not just A tenor, but a Great one. His acting is real good and he is a nice person.
Anyway this is about the Aida in Munich and it goes beyond whether Jonas Kaufmann is a great Radames or not. In this production the world Verdi and his librettists created is ignored. With the magic of Verdi et co it is possible to believe that the love between Aida and Radames is real and romantic even as Aida is a slave and Radames is one of her captors. Here in this production Radames is just slightly better than the murdering, raping scumbags that are the soldiers and officers of the Egyptian army. He can save Aida from rape/murder with a slight hand and neck movement. Aida in Verdi's world was captured and became a slave/maid/pretend friend of Amneris, daughter of the King of Egypt. In this production the slaves (females) are there so any scum of the army can use and abuse them and of course slaughter them. In this world where Aida is Ethiopian slave how is her better, easier. Just like it might seem better to be a house slave than a working in the fields slave, it is not better it is as dangerous but in another way.
Radames is just stupid. He doesn't grasp killing his girlfriends' people is bad. Understanding how her being a slave is affecting her is simply beyond him. He is just about his glory for Egypt. How nice to go to war to the people of his ladylove just for his own glory and take people as prisoners of war, aka new slaves, withouth having any conscience at all. Then his woman sees her father as prisoner and suddenly a bit of these Ethiopians are people too, except that is not that it is about a woman's tear and be a man for his woman.
Of course, JKs Radames is a good-looking guy. That's nice but really nice singing and then he has the crooning, falsetto thing instead of really singing pianissimo. But with Krassimira Stoyanova we at least have a real soprano and with Anna Smirnova as Amneris a just as great mezzo Stoyanova is soprano. Marco Spotti and Ain Anger sing the basses. Franco Vassallo was jus great as Amonasro.
But the production: a beautiful scenography with great costumes, then the regie and ballett stinks.
Brutality on stage, yep, there was a lot of onstage killings. Always making sure that the Egyptians are just murdering scums who also enjoy raping. Every ballett scene was a scene about killing, destroying. Was that really necessary, annoying director/regie maker?
Why can't we just have VERDI's Aida instead on REGIE-Aida?
For reviews from my travels, see www.operaduetstravel.com
Written by operaduets on Sunday, October 11, 2015 No comments:
Email ThisBlogThis!Share to TwitterShare to FacebookShare to Pinterest

Breast Cancer, that was it that killed my mother. My mother looked as a skeleton, she reminded me of victims of Auschwitz but her suffering was not because of the evils of human hatred. A disease killed her, a disease that is more like natural disaster than a car accident.
Unlike the many victims of the Nazi regime where hospitals, doctors and nurses was a part of the pain and suffering. In many cases hospitals was the place to die suffering under uncaring and often brutals arms, my mother was cared for as one always, ALWAYS, should be when in care of doctors and nurses. She still died but her sister was with her on her last night.
The Nazi regime is our shortcut when talking about the evils of the world. We won that battle. I doubt we will really act against the atrocities today as long as Hitler and Nazism are talking points. It is so safe to talk about Hitler comparing people to him because Adolf Hitler is dead and World War 2 is over. Such obvious evil and how to fight was simply going to war.
I hate the Pink ribbon of the fight against breast cancer. I will never go with one. The color Pink is a cheap and easy point to women, men gets breast cancer too. Cancer is not cute and all women are not pink princesses. Cheapening pain is never ok. Breast cancer will never and should never be alluded to as sexy.
The problem is that the cute Panda bear drives in more money than sharks that are under threat of dying out and if they dies our seas might just became rather dead too.
All cancers needs funding and research and Pink Ribbon is just a cute but it is just breast cancer funding.
Cruelty, death camps still exists but the people might have the wrong color and it is maybe in the wrong country. And si we are blind just are were in many, many years until we finally got into the fight against the nazis. Some even thought they were right, but usually today they will I was always on the right side.
We are too often on the wrong side or indifferent, saying who cares about THEM.
We are them, they are us!!!
Written by operaduets on Thursday, October 08, 2015 No comments:
Email ThisBlogThis!Share to TwitterShare to FacebookShare to Pinterest