CavPag and Pizza in Berlin

Everything was fine at Easter. I was free from work and resting and suddenly it was Good Friday (March 25th, 2016) and I was getting ready for a Travel.

Most of everything that I needed was with me and something was lost in Berlin. But as I was in the bus I was feeling sick but luckily it went away. Traveling felt like new for me. I had been sick and the only traveling had been walking (slowly) and taking the taxi (for the short and expensive trips to shopping). And now in a bus. Night bus to Oslo Gardermoen Airport. So the flight to Berlin Schönefeld went fine just as the bus. Then it was the train to Hauptbahnhof and Pizza at Vapiano. An OK Pizza Margerita. Then off to my hotel. Sleeping, resting there and walking to Deutsche Oper Berlin. I collected my ticket and then to the Don Giovanni restaurant for a Pizza Margerita there. Disappointing to say that Vapiano's pizza was better and I was in a hurry and not that hungry.

And then Opera no 1. 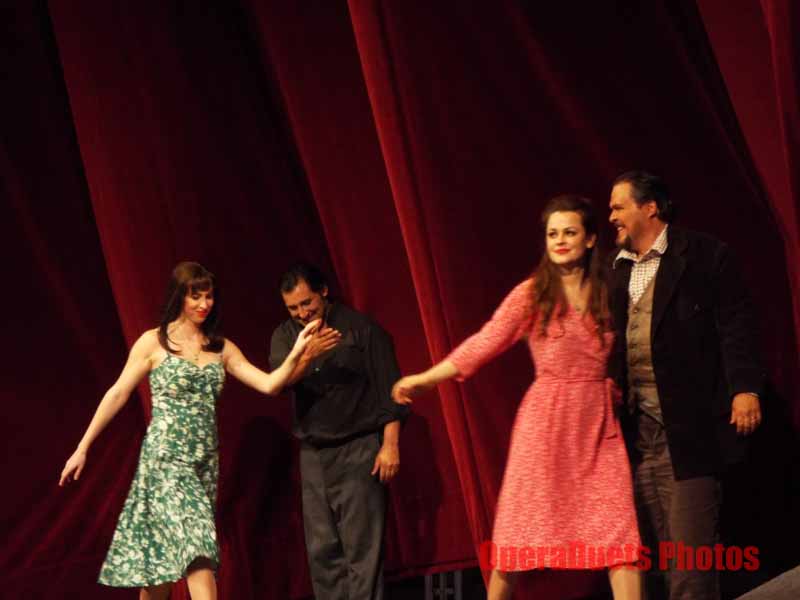 It was almost 11 years ago that I saw this production for the first time (2005-05-01) and I do not like it much. The singing was superb on this occacion. Jorge de Leon (Turriddu) and Elena Zhidkova (Santuzza) have the most amazing voices, strong, vibrant voices and the acting was also superb. Ronnita Miller who looked like a Big Mama from another show was the definitive Mamma Lucia. I found the whole opera Cavalleria Rusticana much more to my liking with this Mamma Lucia. She was so real, so touching and yes, totally believable. Lola was also very good. Mark Delavan was Alfio. His acting was all there but the voice was not up to the high power of rest of the cast which was a shame.

The production has its wonderful moments like the Mass with all the icons and the Hymn. The Lord is risen. The chorus was amazing and Elena Zhidkova was the high light and supported by the wonderful Mamma Lucia, Ronnita Miller. It was an OK production with an incredible cast. Or I should say the cast was very credible and real.

Worst moment was when Turridu is murdered and a doll was sent flying down and Reality just flew away. It was unbelievable, stupid and a crude moment. 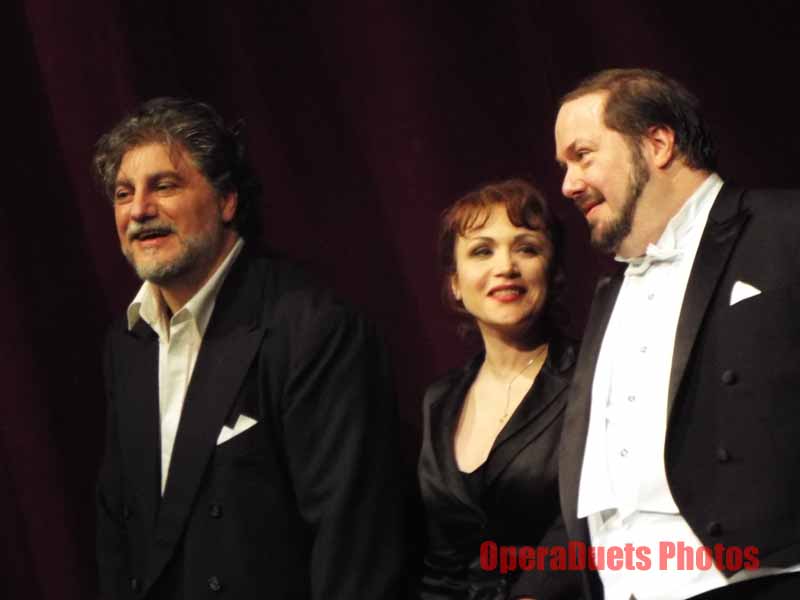 Just like in 2005 Jose Cura was Canio. In 2016 Jose Cura was even better. The singing was beautiful. Jose Cura may look older but he sings younger. The acting was great. He is truly a great Canio, I do long his Turriddu but this time JC could give everything to Canio because Jorge de Leon was Turriddu, Álvaro Zambrano as Beppe is just marvellous, he got everything the voice, acting and looks. Mark Delavan was Tonio. Great acting, weak voice compared to the others. But Pagliacci is all about acting.

Carmen Giannattasio was Nedda and since I don't care for Nedda I can only say she was good (she probably was amazing, but I don't like Nedda so,..). John Chest was Silvio. In another production I would probably say Bravo but here Silvio is a pathetic nerd, he is probably a Nedda stalker. And so the whole theater in theater gets another theatric layer and that it the whole Bajazzo thing is just a snare so that Canio can kill Silvio and just pretend to kill Nedda. La commedia e finita, but David Poutney ruins it when Canio can go away with Nedda. It nullifies it all.

Why should Pagliacci start with the dummy being cast down from the overhead to the road below and Mamma Lucia running to mourn her son. Hanno mazzato compare Turriddu! and the Prologue with Tonio. Why! The Funeral wagon with Mamma Lucia dragging it cross the stage during the Intermezzo. No! Why connect the opera together and then changes the whole stage into a theater stage. Stupid!

....
Taxi to my hotel. Slept well. But suddenly it is Summer time and luckily my Iphone and Ipad changed automaticly even if my watch did not. I LOST a WHOLE HOUR!! Stress, but luckily remembering to go on Iphone time and not Watch time. Back to Hauptbahnhof and Pizza Margerita as Vapiano, Great! Then to Schönefeld Airport. Almost forgot the Summer time thing there but then I was off to security. And I could buy something to drink. Cola Zero is no 2 after Pepsi Max, but I could only choose between Cola (whenever sick or desperate drink), Cola Light (no 3), and Cola Zero. Then the flight to Oslo and the flight home with 2 bottles of Pepsi Max (brought dearly at the airport). Home ca. 1930 (March 27, 2016)

For reviews from my travels, see www.operaduetstravel.com
Written by operaduets on Monday, March 28, 2016 No comments:
Email ThisBlogThis!Share to TwitterShare to FacebookShare to Pinterest

I did not go to Paris. My ticket for Il Trovatore is unused. No reimbursment from the Paris Opera because I was sick. No it was a total loss.

Finally I am well. Breathing more easily, but still not in my form which was never splendid. Still now I can look forward to an opera duets travel, this time to Berlin for CavPag. I hoper Jose Cura will sing on Saturday 26.03.2016 even as he is singing Otello the next day in Salzburg. He is just Canio in Berlin, Jorge de Leon will sing Turriddu. I am half excited and half dreading this CavPag in Berlin. The productiom there is not my favorite. I saw it in 2005. Ekaterina Gubanova is not Santuzza. The website of DOB shows another on: Elena Zhikova. 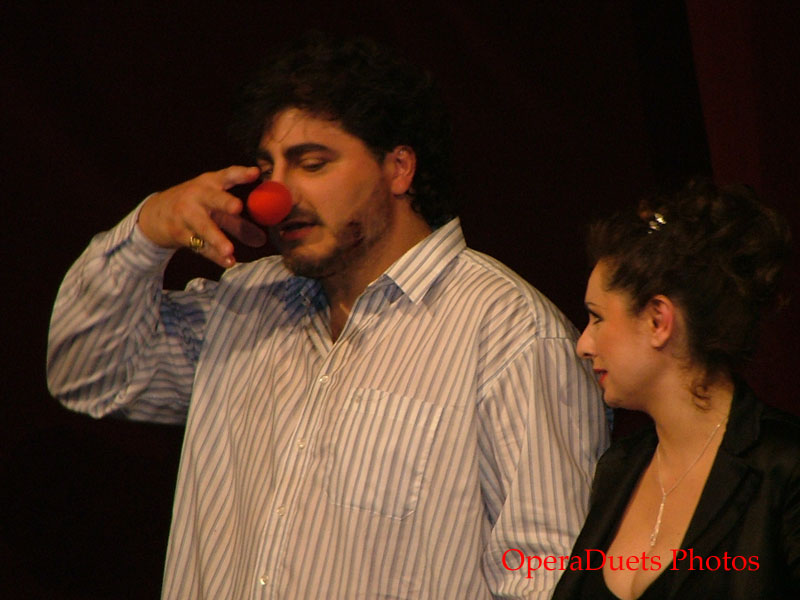 Easter, the Holy week, but for me just days off from work. I love the Easter psalms, some more than others. But now I know too many things in the Bible are just stories and so many are so false that it flies against all real scientists know about the times in which the stories are supposed to be set in. The most false are the stories I allways loved the best, the Nativity story and Easter. Beautiful stories that no one can dislike or hate but the probability that it true are too small to believe now that I am adult and care more and more about Truth. I love fantasy when it does not try to make you believe that it is absolutely true. But this is not the real reason I am drifting even from my soft Christianity. The reason lies in the lies and hate so may Christians show towards others. If Love and Forginess and Second Chances was the face of Christianity I would still support it in some way or another. Prayer is the answer they give to crisis, not action. I would like to see Action not Prayer as the automatic response from the religious people but always their answer is inaction. Prayer in not Action, it is the opposite.
Opera, I still love opera, but know I notice a lot of things like religion in so many operas and I do not accept is as I used too. Another thing about opera is how wrong the love is in this stories. Love in opera, the so called Romantic Love, is a Love that goes smoothly to Hate whenever the loved one does anything the lover does not approve off. But this is Abusive love. I loved you as an angel, now I hate you as a devil, sings the tenor to the soprano. I want to never be loved by this kind of Love, the Romantic one. I do not want to be killed when romance is over. No matter how hard my lover would cry after he had killed me, I still don't want death. Beside the lovers crying over their loved dead ones is more Woe is me! than oh my god now this person is dead and can never laugh and be happy again in this life. Poor me, you must have pity on a murdering lover, someone who can never take NO for an answer. No, my feelings go out towards all those killed by a closed one who never could take a divorce as the answer. How many intimate partners and children has not been killed just over the words No! It is over!

Love does not end. Love does not kill. Love is not ego. Love is to wish the best to the loved ones no matter if you are loved back or not. Your happiness is to see them happy and fulfilled. Love is not a feeling close to hate. It does not hate, love is compassion.
In this Holy Week my wish is that we will all be filled compassion towards all and everyone in mankind and that it will come out with Action towards all injustice even those we will never feel ourselves. Do let Hate TRUMP .... Compassion and LOVE.
HAPPY EASTER!!!
Written by operaduets on Monday, March 21, 2016 No comments:
Email ThisBlogThis!Share to TwitterShare to FacebookShare to Pinterest