My OperaDuets Travel in June: Hamburg and Fanciulla 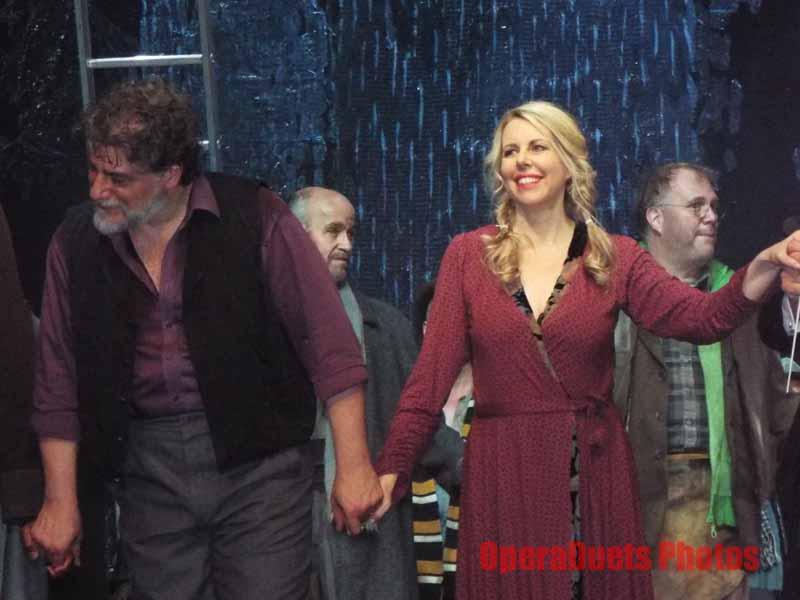 It was Jose Cura's Day.

Some people disagree with me but this was the best Fanciulla del West for me, anyway.
This was the performance where I was never bored. I think the orchestra and the conductor did a fine job at least when I was the on June 4th, 2016. I loved Amarilli Nizza as Minnie. I found her absolutely right. She was the perfect Minnie. Jose Cura did one of his best Dick Johnson. Claudio Sgura was a great Jack Rance. The only thing about Jack Rance was that the director seemed to have had less thought about this important role in La Fanciulla del West than he used when thinking out the singer Jack Wallace. The director made Jack Wallace into a blonde but male Marilyn Monroe clone. What a stupid and useless idea that was! Putting Marilyn Monroe into an actual gold-mine, whoops.
I loved it. It was believable except for Marilyn Monroe, the canary in a gold-mine. The kiss in second act with the curtain coming down, it was snowing, a snow storm outside, and then curtain up and wow, suddenly a few seconds in real time could have been hours together with Dick doing more than just kissing Minnie. That was elegantly done. The sets was used in the best manner in this opera production. And even the 3rd act was well done. Bravi, tutti!
I must apologize to Marilyn Monroe: Sorry but you are still the icon to be used and abused and this time they did it as they were still in kindergarten. Buh!
Written by operaduets on Sunday, June 12, 2016 No comments:
Email ThisBlogThis!Share to TwitterShare to FacebookShare to Pinterest

My OperaDuets Travel in May: Vienna and Boccanegra

Friday 27th of May. A good night sleep, just 30 minutes to the airport and a direct flight to Vienna.A little before 12 the airplane left Frankfurt and after 13 it was in Vienna. Hotel Vienna Amadeus was just 5 minutes walk from Stephansplatz. I relaxed too long at my hotel. I used the the same time as Wiesbaden the day before but the opera in Vienna started 30 minutes before so I had to use McDonald's for food and after my operation I have had problems eating and drinking so I could only eat the pommes frites which I finally had the chance of eating at midnight.

Wonderful opera in Vienna. And even though I was home 2200 Saturday 28th of May. I was actually still tired on Monday at work. Of course to start the week with meetings are never fun. Simon Boccanegra in Vienna was wonderful and well worth the trip. It was hot, though! 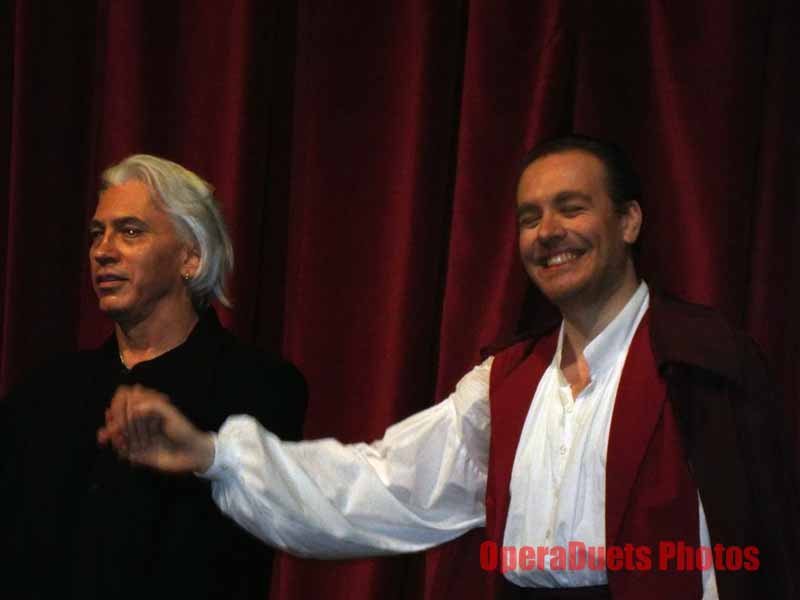 It was Dmitri Hvorostovsky's day, it was Francesco Meli's day.

For many people in the opera this was Hvorostovsky's day as he triumphed in the title role of Simon Boccanegra. For me it was the triumph of Francesco Meli. Ferruccio Furlanetto was also great. Adam Plachetka was an amazing Paolo and I would love to experience him as Simon Boccanegra himself.

Dmitri Hvorostovsky and Barbara Frittoli was soft and suave. They were perfect together but vocally their voices did not had the strength of Ferruccio Furlanetto or Francesco Meli. Furlanetto was the perfect Fiesco and Francesco Meli was the most wonderful and strong Gabriele Adorno. Adam Plachetka was the luxury of Simon Boccanegra.

This production of Simon Boccanegra in Wiener Staatsoper was just stupendous, perfect.
Written by operaduets on Sunday, June 12, 2016 No comments:
Email ThisBlogThis!Share to TwitterShare to FacebookShare to Pinterest

My OperaDuets Travel in May: Wiesbaden and Forza

Finally I was going to see Jose Cura live as Don Alvaro in La Forza del Destino. But no, it was not to be because Cura had to cancel his whole May schedule in 2016. Why? We don't know why but we was know it was in ny way because of the opera production in Wiesbaden. So I decided if I don't get Cura in Wiesbaden then I wanted to check out my new tenor Francesco Meli in Vienna as Gabriele Adorno in Simon Boccanegra.

At this late time to buy my plane tickets because of my operation in early May I found out that with or without flight from Frankfurt to Vienna was almost the same in NOK, only 100 NOK in difference. And the train would force me up even earlier and with very little time to get to the opera house in Vienna. So Oslo - Frankfurt - Vienna - Oslo.

Night bus to Oslo Gardermoen. Arriving OSL 0500 in the morning of Thursday 26th of May. My flight was not a direct one to Frankfurt but went via Munich Airport. It started in OSL 0740 and landed 0950 as scheduled, but my flight for Frankfurt was canceled and the next was delayed and delayed. Had I known that I had so much time I would have found more to eat and not stressed so much. Almost 4 hours waiting in Munich. No fun, always a bit more to wait. Then 1320 finally off to Frankfurt. 1420 in Frankfurt and soon off (after 1 hour resting and eating) to Frankfurt with S-Bahn.

It was just a bit more than 30 minutes until I arrived in Frankfurt and then I went to my wonderful hotel, Radisson Blu Schwarzer Bock. Check in at 1600 and resting. I was pretty exhausted when I arrived the hotel. It was so hot and I was so weak. Relaxing as long as possible at the hotel and then walked to the restaurant near the Hessisches Staatstheater Wiesbaden. I bought the Pizza Margherita and then I went to the opera house and got my ticket and the opera started at 1930. I had a great seat but great singing could not save a terrible production. I don't understand how Jose Cura accept this production. 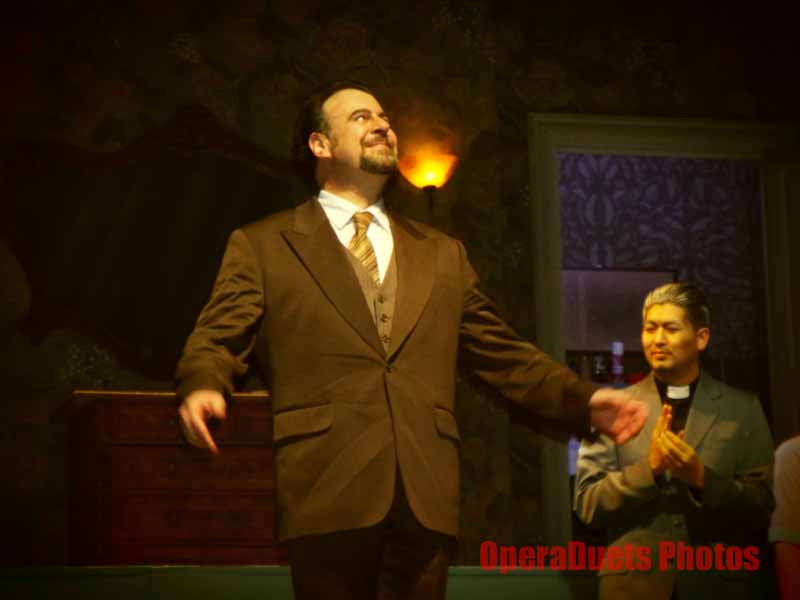 If only Jose Cura had been Don Alvaro...

Now, we had second tenor Richard Furman as Don Alvaro. And that meant we had a weak link. Hui He was a strong, vibrant Leonora and with an equally excellent Don Carlo in Carlos Alvarez. The rest of the cast was also strong singers. Richard Furman acted well but his voice was sweeter and softer than the rest so his Don Alvaro was lost in this Forza del Destino.

I guess that making the singer singing Marchese di Calatrava into Padre Superior was supposed to make an profound effect to the story and that was not really realized in the production. The same was true about making Curra = Preziosilla was a bit better but still in the end made no sense.

Putting La Forza del Destino in our times, or rather World War 2, was also damaging to the whole opera. Without Hui He and Carlos Alvarez or singers in that calible as Alvaro, Leonora and Carlo there is no need to put yourself into this production. The poignant end is no longer poignant!!!

OD Travel & Photos
Written by operaduets on Sunday, June 12, 2016 No comments:
Email ThisBlogThis!Share to TwitterShare to FacebookShare to Pinterest