Sorry that I haven't been writing more in my blog, But, finally, here is my first blog post in 2017. This time I am writing from my "office" and not in my living room.

My travel to Parma, Italy was suddenly decided because I thought the photos from the production looked interresting and now I have this great love for this opera by Donizetti: Anna Bolena.

First my travel to Parma was planned and I found out that travel with Lufthansa to Milano and the train to Parma was the best choice. I have been to Parma before but the latest was in 2005. The cheapest option for me was to Milano Malpensa from Oslo Gardermoen on January 21th and from Milano Linate to Oslo Gardermoen January 23rd. My opera ticket was paid for but I hadn't decided on hotel or even if the hotel would be in Parma or Milano or a combination. Just before my travel to Milano I decided on the hotel, NH Parma. So it was 2 nights in Parma. I loved the hotel. It was close to the train station and to the opera house. And it was cheaper to have the hotel room in Parma than in Milano and it was very convenient, too. Not far from the hotel in Parma was a very nice pizza restaurant and the pizza was absolutely wonderful. Pizzeria Da Luca, ecellentissimo, and very much worth the difficulty in finding it. 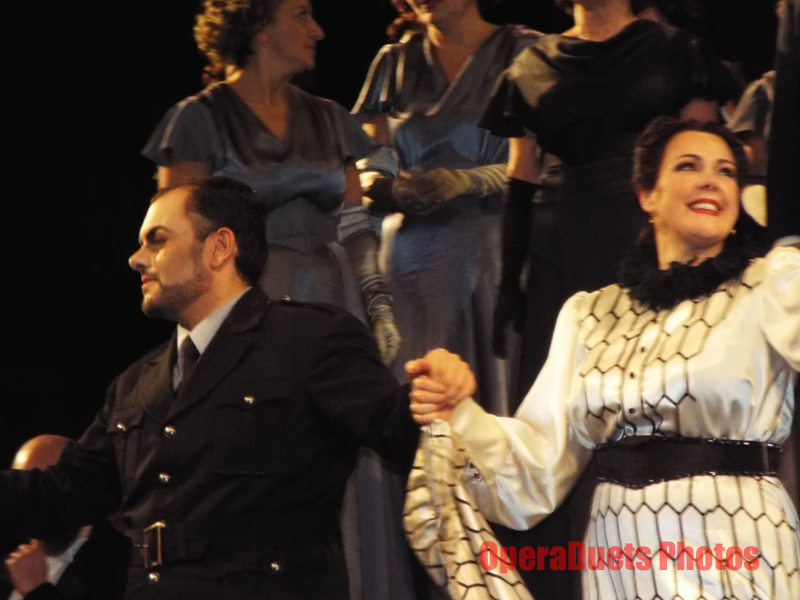 On January 22nd, 2017 I saw Anna Bolena in Parma and it was a very different production than the one I saw in Sevilla on December 10, 2016. In Sevilla it was a traditional production and the costumes was historical correct and everything was done to make it historical. In Parma it was more modern. The dresses in Parma looked like something from the 1940's The acting was excellent and the singing superb from everybody.

What I did not like was that the actions on the stage under the Sinfonia. Why can't they just have the curtain down under the sinfonias or ouvertures. Worse still, it did not make sense. There was the 5 men who created the throne/stool for Anna Bolena was awakens by 5 women dressed in white who was acting during opera as angels/demons. Men in black and women in white but they did not offer more understanding to the story. Luckily one could ignore them and they did not prevent you from understand why the persons acted the why they did.

Yolanda Auyanet was a wonderful Anna Bolena. She looked perfectly regal. The personal regie was stunning and everything made sense, Giulio Pelligra was a joy as Percy. What an amazing tenor voice? Riccardo Zanellato was another perfect choice in the role as the king Enrico. And Paolo Battaglia was another great bass in the role of Rochefort.

Martina Belli was equally perfect as Smeton vocally and acting. BUT she was obviously a woman this page Boy. Did that really matter if Smeton was a woman or a boy? The voice was mermerizing.

In all a wonderful opera matinee (the opera started 1530). A splitting headache in the first part was not ideal but after taking paracet in the cafe in the interval the second part of the opera was more pleasant for me.

But my head
ache meant that a second visit to the pizzeria was avoided as the place had been loud with clatter the day before. So I just bought the cola light that was cheaper to buy in a grocery shop than in the hotel and then I had some food at the hotel.

On Monday 23rd, 2017 I was on Paracet so that went ok. My head ache was subdued. Train to Milano Centrale, bus to Linate airport and delayed flight from Linate to Frankfurt and walking hard to get in time for the flight to Oslo just to find that was also delayed which was almost ok. Then after hours in Oslo, night bus home. Sleep a bit home and then WORK.

For reviews from my travels, see www.operaduetstravel.com
Written by operaduets on Sunday, January 29, 2017 No comments:
Email ThisBlogThis!Share to TwitterShare to FacebookShare to Pinterest