My first time in Portugal and Lisboa, My first time flying with TAP Portugal. My 3rd Anna Bolena and the second in this production.

Why Lisboa? Elena Mosuc as Anna Bolena. I loved her as Lucrezia Borgia and now I got to see her in another Donizetti role. What a voice that woman has and she is getting better, is it possible?

Of course, since it was my first time in Portugal and Lisboa, it was also my first time in Teatro Sao Carlos. An very elegant opera house in the hills of Lisboa. And almost did not get in time. I walked back to the hotel when I was trying to head to the theater, I had to take a taxi. That was a blessing since it was really uphill. The traffic could be fierce or annoying.

First I had to come to Oslo. So thsi time I took the day bus to Oslo on Friday the 10th of February and since my flight to Lisboa was rather late on Saturday the 11th I thought I might stay at relatives in Oslo and be with them until the flight to Lisboa. But it felt like it was late to suddenly call my elderly relatives to stay with them. It did not feel right so I stayed in a hotel in Oslo city centre. It was nice and relaxing but I soon discovered that I had miscalculated what I had in my backpack. I needed more ostomy supply and so my relaxing day in Oslo became a search for some very special ostomy supply. No luck, really, execpt that I was given a crisis package for my isleostomi. That would have been just what I needed if it wasn't for the fact that I needed convex skin barrier that fitted my pouches and ostomy. Luckily my stoma created no difficulty this time so I had enough stuff with me.

While staying in Oslo I also shopped for cloths that was more suited for Lisboa since there climate would not be like the rather cold weather in Norway. Oh yes, 50 % off, Great except it did cost me NOK 1000,- Cheap, well??  But I thought I needed it and I used in in Lisboa. It was blue skies and hotter than Oslo but then the skies went grey and the wind came and so came the cold.

Saturday 11th: 1840 flight with TAP to Lisboa. then bus from the airport and I would my hotel in the city, the wonderful Hotel Mundial. Earlier that day I had decided against staying in a hotel close to the airport and to chose a city hotel. It was a good choice. Lisboa is on London time but my Iphone saved me from making mistakes. And my watch was always on Norwegian time. I stayed to night in this wonderful city hotel. I went to eat out before the opera. As usual I had miscalculated the time and then the combination of me and Google maps meant that I started walking in the wrong direction so Google maps thought I was going to the hotel while I thought I was going to the opera. Luckily at the hotel there were a taxi and I was driven to the opera house. 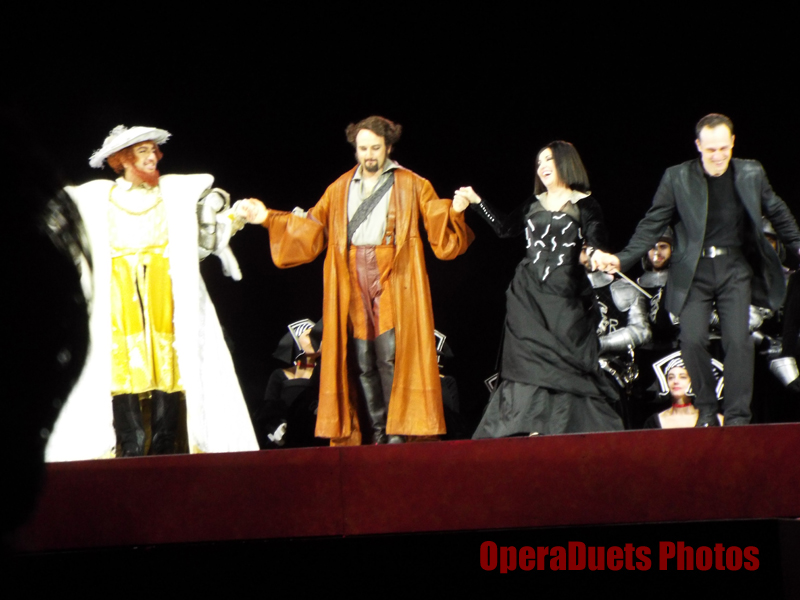 I loved the production just as much as I did in Sevilla December 2016. This time it was different. Different singers and different feeling of the characters.

Burak Bilgili as Enrico had a smirk on his face that make him an instant villain. Jennifer Holloway as Giovanna Seymour was very tall and did not seem to be so unwilling to become queen and her relationship with the queen seemed hypocritical. Other than that it was amazing singing and acting from all.

Leonardo Cortellazzi was a wonderful Lord Percy, Lilly Jørstad was fantastic ad Smeton, Elena Mosuc was a gorgious Anna Bolena. Luis Rodrigues was great as Lord Rochefort. Among this gigant one could forget Marco Alves dos Santos as Hervey but we really should not forget him.

If one did not like the characters that Burak Bilgili and Jennifer Holloway brought in Enrico and Seymour it was a valid intepretation. Historically we know very little about Jane Seymour. The singing of all singers was at the highest standard. Also we had a great chorus and orchestra lead by maestro Bisanti.

In Sevilla and also in Parma the singing had been more come scritto, but here the singers was allowed to created a flourishes in their musical line. Excellently sung but I longed for the clarity of the come scritto approach. I am not a musicologist but those were my feelings,

After the opera I could walk downhill to my hotel. The breakfast seating of Hotel Mundial was decided by hotel employees. The breakfast itself was wonderful. So it was Monday 13th, 2017 and I was heading home in an old plane and sitting on the back seat longing for Norway and my home near a Norwegian fjord.

Beautiful Lisboa but Sevilla will be closer to my heart. Elena Mosuc as Anna Bolena, the voice and acting, sublime. A new tenor to love: Leonardo Cortellazzi. This is the time for the Italian tenors to get to the opera ceiling. Divine voice, graceful acting, ah!

Finally in Oslo and deciding to fly home and I wished ...


For reviews from my travels, see www.operaduetstravel.com
Written by operaduets on Saturday, March 04, 2017 No comments:
Email ThisBlogThis!Share to TwitterShare to FacebookShare to Pinterest