Soon on my way to Zurich

Good reports about Agnes Baltsa and Elektra in Zurich. Heard a wonderful snippet of it.

Weather in the mountains of southern Norway is not great. Night bus, will it be a great night or a terror?

IPad is out. I am in love. But when will it be in Norway and how much more will I need to know about it and costs to buy and then enjoy it. It sounds like something great to have on travels. But even more questions is looming...

Weather in Zurich, have I packed the right stuff with me.

For more reviews from my travels, see www.operaduetstravel.com
Written by operaduets on Thursday, January 28, 2010 No comments:

I was at the Stage Door of Vienna State Opera on May 31, 1998. A wonderful performance of Meyerbeer's Le Prophète was over. Plácido Domingo was Jean and Agnes Baltsa was Fidès, Jean's mother. Viktoria Loukianetz was Berthe, Jean's fiancée. And then Plácido came out. No digital camera at that time. I just checked briefly at what height I should have the camera to get it in face height and then I just took a photo without looking to check if Placido was there and I got this great photo. Actually the only photo in the whole pack that was anything.

And it is my best photo ever. It was just luck and chance. Viva Plácido!


For more reviews from my travels, see www.operaduetstravel.com
Written by operaduets on Friday, January 22, 2010 No comments:


For more reviews from my travels, see www.operaduetstravel.com
Written by operaduets on Wednesday, January 20, 2010 No comments:

In only 9 days I will be in Zurich enjoying some opera by Richard Strauss and Giuseppe Verdi. I will travel lightly, only backpack and no computer. The computer will just add weight and would I really have time to write something down. Maybe I will use Twitter first. Or maybe not.

I hope to see Agnes Baltsa after the performance of Elektra and I hope this time I will find this opera more enjoyable. But I am really looking forward to Nabucco with Maria Guleghina as Abigaille. Always exciting to see / hear Maria Guleghina although sometimes she can be oddly off. Guleghina is perfect as Abigaille. How will Juan Pons be as Nabucco? I hope he can really give it all as Nabucco. He was not quite there as Seid in Il Corsaro (Zurich December 2009) the critic said. I hope for the best and to see Guleghina and Juan Pons at the stage door after the performance.

My health can sometimes make an otherwise great travel into something else. But then sometimes it is the travel itself that really make me lose energy. So it is always exciting to travel. What will happen. Looking at my Yahoo Calendar I see me waiting for the Swiss counter to open at Oslo Airport so that I can get my boarding card, and I see a long wait at Zurich Airport to get my flight home. And I am thinking, should I try to fly home in stead of 7 hrs bus ride back home. I am still uncertain.


For more reviews from my travels, see www.operaduetstravel.com
Written by operaduets on Wednesday, January 20, 2010 No comments:

I have just looked into the year 2006. Strange what can happen and what you can forget. I had forgotten that in year 2006 I had 2 operations. Two operations in one year forgotten. Amazing. But that is part of me, forgetting Living and remembering Operas.

In 2006 I celebrated Norway's National Day, May 17th, in hospital. I remembered that but not the year. But now with help of mother's memory and aided by Yahoo Calendar I have some facts.

Night to May 11 I started to feel ill. On May 11 I was driven by ambulance to Førde. But I was not operated until May 12th. The reason was that I have Crohn's disease and they thought it was that and not my appendix. So I got a big scar since they thought they need to open me up that much. Luckily I had quite a fever and couldn't care less about getting operated or not. When you have 40 C in fever, you are pretty much in your own world. It was much worse for my mother.

I was lucky that the worst for me was the tubes in my nose that I hated. But then I got out of hospital and felt normal again and I only had to adjust to the scar. Big scar but it became part of me rather quickly. The truth is of course that I could in the worst case have died or like my aunt gotten a serious infection. But I was out on May 18 with only a scar a little bigger than if they had known it was just my appendix ready to burst.

On the bright side: they could just used by scar when I was operated on in February 2009 for my ileostomy. And I only had to adjust to the new normalcy and not bother a thing about the scar.

But I did get a small scar in 2006. My second operation in 2006, you know. My mother was so sure it was in July but I have proof from my Yahoo Calendar that it was in the end of August. But other than that wow did I find out that my ideas about what happens during that operation was kind-of wrong. But I have a great excuse I was not mentally present during my own operation. That would have been so wrong. In that operation they had to work for get some of the nonsense from my endometriosis off me. I thought it was just the ordinary hernia operation. But it was really there I got my endometriose diagnosis.

For more reviews from my travels, see www.operaduetstravel.com
Written by operaduets on Sunday, January 17, 2010 No comments:

Another Elektra with Agnes Baltsa as Klytämnestra in Zurich January 29th. Why do I do it? I find ELEKTRA boring and depressing. 1hr 50 minutes with no pause. If I were in New York I could have seen STIFFELIO with José Cura, Stiffelio is as long as Elektra but it has 3 acts and intermissions. I would have loved a 35 minutes intermission in the one-act-opera of Elektra. And José Cura is great as Stiffelio, Klytämnestra  (Agnes Baltsa) has only 20 minutes of singing, unfortunately not Richard Strauss finest opera.

BUT on the good side, I will see Agnes Baltsa, my favorite mezzo, and it will be interesting, I hope, to see a new production. But it is not Giuseppe Verdi, my favorite opera composer. It doesn't have as great melodies as Stiffelio, my favorite opera. If José Cura was singing, no.

The best melodies in Elektra is in the orchestra pieces.

Remember this is only my opinion of Elektra, YOU are free to have Elektra as favorite opera. I wish I loved it, too.

For more reviews from my travels, see www.operaduetstravel.com
Written by operaduets on Tuesday, January 12, 2010 No comments:

Stiffelio at the Metropolitan, now with Cura

Photos from the Met via theoperacritic.com


COMMANDOpera has heard the audience can expect top notch performances from virtually the entire cast. Mr. Cura whose vocal instrument appeared to have been strained in Europe recently with a distinctive lack of tonal purity, apparently is in fine form once more. Is it wishful thinking? COMMANDOpera cannot gainsay, although Mr. Cura’s vocal instrument has darkened over the years and perhaps Verdi is a suitable composer for this period. Here is Mr. Cura last month in a Christmas concert in Vienna, so that readers may draw their own conclusions of what they might expect to hear tonight at 8 PM EST.


For more reviews from my travels, see www.operaduetstravel.com
Written by operaduets on Tuesday, January 12, 2010 No comments: 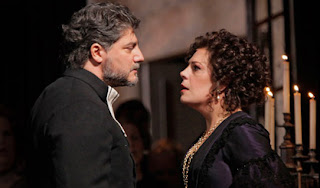 I have heard reports from the dress rehearsal of Stiffelio in the Metropolitan Opera was very good.

Written by operaduets on Sunday, January 10, 2010 No comments:

For more reviews from my travels, see www.operaduetstravel.com
Written by operaduets on Tuesday, January 05, 2010 No comments:

Yesterday was a slow day at work. Today I thought it would never end. Now the students have to pay for what they print out. So it was student cards, PUK codes and printers working or not. Another month of working 50 %. Maybe I will work more next month. My plans for travel and free days for January, February & March is OK.

=
Rolando Villazon debut in Zurich as Alfredo in Verdi's LA TRAVIATA on May 21, and sings on May 24 too. Gala ticket prize

La Traviata, “the woman who has gone astray”: flippantly trifling with love, she has rich men to idolise and keep her – until she encounters Alfredo Germont, and with him true love. However, their happiness is short-lived, for Alfredo’s father does everything in his power to prevent the misalliance of his son with a demimondaine. In despair, Violetta relinquishes her lover and returns to her earlier life, until she dies of consumption.


For more reviews from my travels, see www.operaduetstravel.com
Written by operaduets on Tuesday, January 05, 2010 No comments:

I have changed the title of my blog to OperaDuets Travel and Living. A name change that will mean that I will have more posts about my life in Norway filed under the tag LIVING. I will still have NEWS, of course. And of course posts about my opera travels and opera reviews.

And now I have a story about Travel in Norway in winter.

My First Travel in the New Year. Not an opera travel but still...

Uneventful travel from my parents' home to Oslo. No night bus for me but a flight. So Oslo meant Oslo Gardermoen airport. Easy, lots of people, but still no stress, really. I found a machine to get a baggage tag and boarding card. Not necessary to have a boarding card really, but I like the security in it. The security or risk may be imagined but still enough for me. The long security line. Always thinking, I am in the wrong line. I often find myself in the slowest one. But I have TIME. Everything is OK. I have TIME, now I need somewhere to sit. Found it 3 times. Luxury to sit when it is so full packed with people.

I find myself sitting at my gate. It is later than the boarding time on my boarding card but only a few minutes. And then we are in. The plane is heading to Western Norway where it is not very good weather, it is snowing heavily. Yep, seem impossible to the people who are going to the second airport. I am confident, I am only going to the first one. The plane will land there. But the plane get into the landing circles. And 20/30 minutes after we should have landed it is clear that another airport will be our landing spot and we will get buses to our original destinations. A 2 hours bus ride, they say.

But we are in Western Norway now and the snow have made the roads slippery. And then the bus is getting really close even as slow as it must go when the electric things makes the bus loose its pulling power. 3 times it happens and every time the driver must shut down electricity and start 30/60 seconds later.

0020 I am home. 3 hrs later than hoped for. But it is 5 hrs earlier than with night bus, but of course that bus could have had even bigger trouble going over mountains as it does.

SO it was a Happy Ending.


For more reviews from my travels, see www.operaduetstravel.com
Written by operaduets on Monday, January 04, 2010 No comments:

For more reviews from my travels, see www.operaduetstravel.com
Written by operaduets on Saturday, January 02, 2010 No comments: