I have a lump in my throat, in between opera and hospital visits

This time my lump in my throat has nothing to do with my love of opera except they both belong to me for the time being. Only 3 percent risk that it is malignant but every year the the lump will become bigger and 1 percent more likely to be malignant.

In between many operas this year was also many small visits to doctors and hospitals. Crohn's disease, migraine, seeing and hearing not ok. So MR, CT, operations on both eyes to get better eyesight (first right eye and then left with weeks in between, hearing equipment for my hearing ear that does not hear too well either. MR to my brain showed nothing dangerous in my brain but something in throat/neck was there and suddenly a normal doctor's appointment meant quickly to the another hospital for more checks. I had to stay there some days just to get some tests. Later another hospital again for a better test with better equipment. Staying overnight to get my test. Then weeks later, on October 20th to talk to a doctor about what they had found. He smiled and was ever so nice so I almost did not hear the word "tumor". I kept my cool, the doctor was smiling so how bad could it be. Most likely, 97%, it is benign, but the placement is not good and it will become bigger year for year and the probability of it becoming malignant will increase (just 1 percent yearly). So an operation in 3 months time, yes, I agreed to that.

Well, I have a lump in my throat but it doesn't hurt and I am optimistic. I LOVE OPERA!! I will make sure that the operation will not hinder me overly in seeing the operas I have planned. I am not an opera singer so if the operation touching my vocals cords I will be Ok, and even if it gets too close to nerves for half my face I will still be OK. I have decided to be cool now and OK after the operation. Nothing will hinder my love for opera!! And pizza! 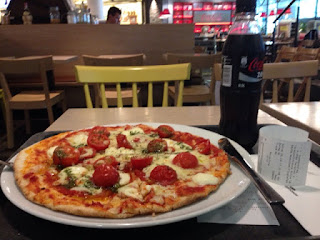