Looking forward to April, May, June and maybe July 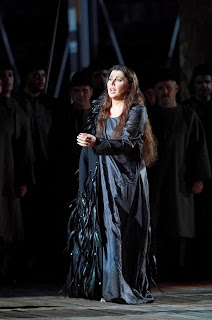 After no opera in February or March, finally April is coming. And I will have a wonderful (I hope) Easter holiday. First in the Palm weekend, Stiffelio in Stockholm and Cav/Pag in Barcelona. Then the Easter week with my parents. Then to Zurich for La Boheme with José Cura. Then back home. After my Easter holiday I will have a little time before my gall bladder operation, and then April will be over.

I hope my operation will not hinder me to travel to Vienna in early May for Jenufa with Agnes Baltsa and Nabucco with Maria Guleghina. Later in May I will then travel to Berlin to see Samson et Dalila with José Cura.

Then it will soon be June and that means a trip to Dortmund, Germany for a concert version of IL CORSARO with Maria Guleghina (June 10th to be precise). Later to Zurich for Cav/Pag with Agnes Baltsa and José Cura.

For more reviews from my travels, see www.operaduetstravel.com
Written by operaduets on Monday, March 28, 2011 No comments:

Written by operaduets on Sunday, March 27, 2011 No comments:

Un bel dì
A dream that a ship would arrive Nagasaki with her beloved marine Pinkerton but he arrived with a wife and an intention to take their son from her. So the opera Madama Butterfly by Giacomo Puccini ends with a suicide and with Pinkerton running with her name on his lips but arrives too late. He feels remorse but too late.

What does this have to do with the recent events in Japan? Very little. Except that the word Nagasaki reminds me of the nuclear bombs that fell over Hiroshima and Nagasaki. And now another nuclear disaster looms over Japan. This double-triple nature disaster is the biggest that Japan has experienced since the Second World War.

The opera by Puccini is about the small and personal disaster of one Japanese woman. But the earthquake/tsunami is the personal disaster of many, many persons. A 9.0 earthquake is a force much greater than one can imagine. To hear that the difference between 8.9 earthquake and a 9.0 is many, many times the force is unimaginable to most if not all people. Yet, that was what was happening. Then it was and still is, I think, the after-shocks. It sounds innocently but it is earthquakes too and some of the quite big. Small only when one compare to the giga-shock. And then tsunami, a wall of water. What makes it more damaging it all the other elements that the water brings. Homes, workplaces, whole cities destroyed.

But still, Un bel dì vedremo. Japan will be rebuilt with home, workplaces. But lives has been lost. Those who live on has experienced life-threatening times, some have had severals of those experiences. And many have lost relatives, neighbors and colleges. I worry about the lives that also need rebuilding. The people of Japan. To see on TV the Japanese people helping each other and to see a factory owner happiness in finding another of his workers. I see the love and care of the Japanese and I hope that world will not fail in giving our heart and help for as long that Japan will need us.

I hope that the disaster in Japan would make us smarter about building nuclear power plants, etc on dangerous places. Must we never underestimate Mother Nature!


Can't we learn before disasters strikes, and not always after. I am so sick of people having to die and get sick before we get serious about preventing harm.

We must hope for the Beautiful Day to appear for the people of Japan and that the mental health of a people who is suffering will be tended to. I have faith that families, neighbors and colleges will work together to lift each other up. But first it is survival time, then we can hope of a good life...

For more reviews from my travels, see www.operaduetstravel.com
Written by operaduets on Tuesday, March 15, 2011 No comments:

Who does Abigaille think she is?

She thinks she is the King's eldest daughter. Her idol is her father but he cares only for Fenena, his only biological daughter. No wonder Abigaille has a difficult relation to her sister. The love of her father is not the only issue but that Ismaele also prefers Fenena is like a deadly poison to the heart of Abigaille.

If she cannot have her fathers love at least his admiration. That is her real reason for soldiering and dreams of becoming Queen. Nabucco is blind to her needs. He is a man of ambition himself so he can understand ambition but that she is trying to show him her love is beside him to see. The need of an heir was behind the making of Abigaille as his daughter. His need was met but the need of a child of love from a parent was not met. All the times when he shows his preference for Fenena he creates poison in Abigaille's heart.

Of course Abigaille is a cruel warrior but no more than Nabucco himself. But Abigaille has a sweet side to. Not only willing to save Ismaele but even his people Israel. She only want his love. But it is too late. Fenena owns his heart. Deep down Abigaille even love her sister. When her jealousy at last is over she can feel loveand only love.

In the end of the opera one can hope that she is at last seen by God and forgiven. I find her conversion deeper and more touching than Nabucco. Nabucco gets a whole scene and she only an aria in the end.