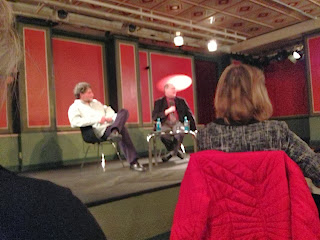 This time I was in Berlin for a concert of South American music. It was a nice trip. Another time something I did just because Jose Cura would be there singing Argentinian songs.

A reviewer of the concert said that Cura seemed to be uncertain and not fully himself until he sang Aurora by Panizza. He must have been on another concert. The concert was on Friday 21, Saturday 22, and Sunday 23., I was there on Saturday, the reviewer was probably on Friday. I cannot be sure that he was wrong since I only attended the concert on Saturday but I think he was mistaken. Of course a tenor would sing an opera aria with a fuller voice than he would sing the delicate classical art songs of Guastavino and Ginastera. Aurora is an opera by Panizza, the Intermezzo Epico is an Opera Aria. The songs of Guastavino and Ginastera are canciones. With Aurora comes the Opera Tenor Jose Cura, with the canciones comes the recitalist Jose Cura. On Saturday Cura showed that he can sing with his sweetest voice what must be sung so and with more forceful when the text demands it. This is fine and delicate work done by a master. Everybody knows Jose Cura as a operatic tenor with his famous Otello, Samson, Calaf. So those who expect to hear something more like Otello find something familiar when he sings the Song to the Flag from Aurora.

I must say that I liked best Huapango by Moncayo. The orchestra works of Ginastera was too much noice. Of course, the cello player was divine. I loved the conductor. And Jose Cura was wonderful!!!

2 extra orchestra numbers, first was very famous and catchy but I don't remember what it is called, last one was Mambo from West Side Story by Leonard Bernstein.

Next weekend in Berlin ... Jose Cura

Written by operaduets on Sunday, February 16, 2014 No comments:

"Francesco, son of Nicolò Foscari, was born in 1373. He was nominated a member of the Council of Ten in 1399, and, after holding various offices of state, elected Doge in 1423. His dukedom, the longest on record, lasted till 1457. He was married, in 1395, to Maria, daughter of Andrea Priuli, and, en secondes noces, to Maria, or Marina, daughter of Bartolommeo Nani. By his two wives he was the father of ten children—five sons and five daughters. Of the five sons, four died of the plague, and the fifth, Jacopo, lived to be the cause, if not the hero, of a tragedy. "

See this book on Amazon.com

The younger of the "Two Foscari" was a man of some cultivation, a collector and student of Greek manuscripts, well-mannered, and of ready wit, a child and lover of Venice, but indifferent to her ideals and regardless of her prejudices and restrictions. He seems to have begun life in a blaze of popularity, the admired of all admirers. His wedding with Lucrezia Contarini (January, 1441) was celebrated with a novel and peculiar splendour. Gorgeous youths, Companions of the Hose (della calza), in jackets of crimson velvet, with slashed sleeves lined with squirrel fur, preceded and followed the bridegroom's train.

Jacopo had everything which fortune could bestow, but he lacked a capacity for right conduct. Four years after his marriage (February 17, 1445) an accusation was laid before the Ten (Romanin, Storia, etc., iv. 266) that, contrary to the law embodied in the Ducal Promissione, he had accepted gifts of jewels and money, not only from his fellow-citizens, but from his country's bitterest enemy, Filippo Visconti, Duke of Milan.

Three years went by, and once again, January, 1451, a charge was preferred against Jacopo Foscari, and on this occasion he was arrested and brought before the Ten. He was accused of being implicated in the murder of Ermolao Donato, who was assassinated November 5, 1450, on leaving the Ducal Palace, where he had been attending the Council of the Pregadi.

Innocent or guilty, he was sentenced to perpetual banishment to the city of Candia, on the north coast of the island of Crete; and, guilty or innocent, Jacopo was not the man to make the best of what remained to him and submit to fate. Intrigue he must, and, five years later (June, 1456), a report reached Venice that papers had been found in his possession, some relating to the Duke of Milan, calculated to excite "nuovi scandali e disordini," and others in cypher, which the Ten could not read.

Written by operaduets on Sunday, February 16, 2014 No comments:

The other Venice: I DUE FOSCARI i Vienna. 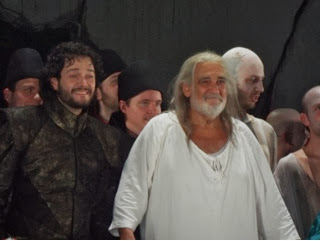 I DUE FOSCARI by Giuseppe Verdi. Different from La Gioconda in many ways. Verdi's music sings of the waters surrounding Venice, the production tells of a cruel world filled up with torture and the unlucky souls caught up in the power games of the Counci of Ten. The lauded Fairness of Venice is that even a son of the current Doge can be caught in the web. Fairness, they call it, and pity as cruel verdicts is given both father and son Foscari.
La Gioconda is a Venice of later centuries than the story of the two Foscari. Whether or not Jacopo Foscari is guilty his treatment is too cruel to be fair. To our eyes Torture is never acceptable and we should never be willing to trade that truth. In the century of Foscari torture was used often, but was it thought acceptable then? Due Foscari had a lot of torture going on onstage. I hated that, but it was not put there on a whim, it was telling the story. I am just not a fan of cruelty onstage but even more do I object to the cruelty of torture and courts of law where the law is followed in such a way that it is a mockery of human lives and their sanctity. It is an important lesson but are we willing to see it as it happens now somewhere on the planet and work against the ills of our world.
Arturo Chancun-Cruz was able to justice to Jacopo Foscari, singing as a god as Jacopo was tortured on stage. That must have taken a lot of will power. Behind the scenes and onstage people must have really been learning a lot of safety features unssen by the audience as all that torture happened.
Davinia Rodriguez as Jacopo's wife, Lucrezia Contarini, had so many different palettes of sounds. In the end she would win the audience heart. The hardest role was hers and she was amazing.
Placido Domingo as the old Doge Francesco Foscari. Unhappy father and now he was to lose his last son. The implacable enemy wanted all Foscaris gone and dealt with and with the power of the Council of Ten in his hands he had the power, The Doge dies utterly unhappy with no shame spared. Loredano  uses a mock pity is used to knife his victims.
Foscari has not yet drawn fully his last breath before the new Doge in crowned. Loredano' justice has been served.
I DUE FOSCARI is a masterpiece just like La Gioconda. The story of Foscari is part of the history of Venice. La Gioconda is a story that happens to be in Venice.
Written by operaduets on Saturday, February 01, 2014 No comments: