Henry VIII (28 June 1491 – 28 January 1547) was King of England from 21 April 1509 until his death. Henry was the second Tudor monarch, succeeding his father, Henry VII.
Henry is best known for his six marriages and, in particular, his efforts to have his first marriage, to Catherine of Aragon, annulled. His disagreement with the Pope on the question of such an annulment led Henry to initiate the English Reformation, separating the Church of England from papal authority and appointing himself the Supreme Head of the Church of England. Despite his resulting excommunication, Henry remained a believer in core Catholic theological teaching.

Henry Percy, 6th Earl of Northumberland, KG (c. 1502 – 1537) was an English nobleman, active as a military officer in the north.[1] He is now primarily remembered as the betrothed of Anne Boleyn, whom he was forced to give up before she became involved with King Henry VIII.

Jane Seymour (c. 1508 – 24 October 1537) was Queen of England from 1536 to 1537 as the third wife of King Henry VIII. She succeeded Anne Boleyn as queen consort following the latter's execution in May 1536. She died of postnatal complications less than two weeks after the birth of her only child, a son who became King Edward VI. She was the only one of Henry's wives to receive a queen's funeral, and his only consort to be buried beside him in St. George's Chapel, Windsor Castle.

George Boleyn, 2nd Viscount Rochford (c.1503 [1] /c. April 1504 [2] – 17 May 1536) was an English courtier and nobleman, and the brother of queen consort Anne Boleyn. This made him the brother-in-law of King Henry VIII and the maternal uncle of Queen Elizabeth I of England. A prominent figure in the politics of the early 1530s, he was convicted of incest with Anne during the period of her trial for high treason. They were both executed as a result.

Mark Smeaton (c. 1512 – 17 May 1536) was a musician at the court of Henry VIII of England, in the household of Queen Anne Boleyn. Smeaton, the Queen's brother George Boleyn (Viscount Rochford), Henry Norris, Francis Weston and William Brereton were executed for alleged treason and adultery with Queen Anne.

OPERA
Anna Bolena is an opera by Gaetano Donizetti. It is a tragedy. The 5 main characters all have flaws.

Anna Bolena (Anne Boleyn) wanted a crown so she chose Henry the 8th (Enrico), the King of England not Percy. Sir Riccardo Percy (in reality it was Henry Percy who was betrothed to Anne, but the opera could not have with the name Henry, Enrico in Italian). The real Anne Boleyn might possibly be a much better person than she is usually portrayed even in the history books. (19 May 1536)

Giovanna Seymour (Jane Seymour) fell in love with a king who already is married. She also was a close friend of the Queen, Anna Bolena herself. Giovanna wants to be free from the king's love since he is not free to marry Giovanna. She loves the King and the Queen.. She is flawed but the most virtous of the 5. The real Jane Seymour was also probably a more complex person, or may not. (24 October 1537)

Smeton (Mark Smeaton) is a young musician in the court. In the opera Smeton is more of a teen ager than a 23-24 year old person and beloved by Anna Bolena in an innocent way but he is in love with her. In love and a social climber, perhaps. In love in the opera, social climber in real life. But both showed he was just unlucky and a pawn in Henry's game. (17 May 1536)

Sir Riccardo Percy (Henry Percy) is mortally in love with Anna Bolena. He is a foolish, young man who plays right into Enrico's deadly plan to get free to marry Giovanna Seymour. The real Henry Percy was once bethrothed to Anne Boleyn but the bethrothal was without permisson of either the king or father. Anne Boleyn was not noble enough for young Henry Percy decided his father. (29 June 1537)


In May 1536 Northumberland, by now a man in broken health, formed one of the jury for the trial of Anne Boleyn. Anne is said to have confessed a precontract with him in the hope of saving her life.[1] He collapsed following the verdict and had to be carried out.[11]

Lord Rochefort (George Boleyn, 2nd Viscount Rochford) was Anna's brother and friend of Percy. He led Percy into his sister's room, it was supposed to be empty but Smeton was already there. And so Enrico had his evidence of adultery as he wanted. How Rochford thought the king's castle could be safe and how to stop the King to enter the Queen's room...

Enrico VIII (Henry VIII of England) is the king and he decides. Enrico has fallen out of love in Anna Bolena and is now in love with Giovanna Seymour. He wants to be loved as the man Enrico and yet he uses his role as king to get his way. He now hates Bolena and thinks she only wanted a crown and in that way he thinks he is not that guilty of all the deadly schemes he makes. Seymour is now his love and conviently he thinks FAMA, means that Seymour wants to be queen, but for Seymour the word means her virtue. Giovanna tries to save the life of the Queen, but Anna must accept to no longer be queen. Anna refuses and the King wins. Naturally he would have won anyway because he is The King.

The day after Anne's execution in 1536 the 45-year-old Henry became engaged to Seymour, who had been one of the Queen's ladies-in-waiting. They were married ten days later.[103] On 12 October 1537, Jane gave birth to a son, Prince Edward, the future Edward VI.[104]

Percy married another woman, and died not by the King's hand.

For reviews from my travels, see www.operaduetstravel.com
Written by operaduets on Thursday, December 29, 2016 No comments:

Email ThisBlogThis!Share to TwitterShare to FacebookShare to Pinterest
Tags: Opera vs Reality

I have always wanted to se Seville, Spain, and now I have been there. I loved it!!!

Not to hot, blue sky and Seville is beautiful.

I arrived in Seville at 2010 in the evening on Friday 9th December after night bus to Oslo Gardermoen Airport, flight to Malaga airport and bus to Seville. Nettbuss.no, Norwegian.no and ALSA.es. I used the apps on my Iphone and wallet. In Oslo we had to wait an endless hour until we could be up in the air. I wondered if I would be on time for the bus ride from Malaga airport to Seville and I was lucky. When I arrived in Seville I decided to take taxi to my hotel. So after all that travel I had a nice meal in my hotel room courtesy Room Service. On Saturday I walked in Seville and shot many photos. It was just so beautiful and the Royal Tobacco Factory in Seville was now University of Seville. I walked 9,8 kilometres that day according to my phone. 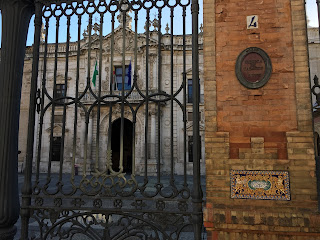 I love Gaetano Donizetti and Anna Bolena is a beautiful opera. Angela Meade was a wonderful Anne Boleyn. Ketevan Klimoklidze was a lovely Jane Seymour. Alexandra Rivas was an amazing Smeton. Visually one would never mistake one for another but vocally they was quite similar although Anna is a soprano role, Jane mezzo and Smeton is an alto. Maybe the three roles can be sung by mezzos.

Simon Orfila was Henry the 8th, Ismael Jordi was Richard Percy. The production was very historical and the costumes, too. Maybe too much historicality,  The music was mesmerizing and the singing good. Loved it!!!

For reviews from my travels, see www.operaduetstravel.com
Written by operaduets on Saturday, December 24, 2016 No comments: