Why do people boo? NB maybe it was not a boo this time but a BRAVO where Bra was drowned by exstatic applause after Jose Cura's Flower Song so only Vo was heard and V's and B's can sound alike. (April 1, 2015)
No. Let me start with the beginning. Jose Cura was to sing Don Jose in Milano so naturally I bought a ticket. Well, first I waited until La Scala would be selling those tickets and THEN I bought it. Naturally I bought only the Saturday, afterall I am a working woman too, not just an opera fan. Then the disaster happened. No, not a disaster just my brain deciding that it was on February 28th Cura would be singing so I booked my flight tickets accordingly. Following what Jose is doing is a part time internet thingy for me so suddenly I noticed MARCH. Lufthansa was helpful so I could rebook it but at no time was I thinking about Easter and more importantly Easter holidays so I just booked March 27-29. Friday 27 th of March because of cheaper plane tickets or rather the rebooking would not be TOOO expensive but still wow did that make my costs higher. But Don Jose Cura would be worth it, yes? Please!
Finally I realised and it was on Palm Saturday so on Palm Sunday I might stop in Frankfurt for Parsifal. lovely music. Rolando Villazon was singing in Munich Hoffmann (Offenbach, remember!) and yes I can combine that too and now going back to Norway from Munich on April 1. Yes, it was and will be a costly decision but worth it, totally? Please.
Towards the booing in La Scala. Thursday night bus to Gardermoen. Yes, I slept some. Then off to Milano Malpensa via Frankfurt. Malpensa will be great once they finish the unfinished works. I know Malpensa so I take the Malpensa train to Milano Centrale. I find my hotel after not to much looking around feeling stressed. Hotel Bristol is really close to the train station. A lovely situation. Because of thinking about the costs I decided not to go to hotel Spadari al Duomo and that meant 200 euros spared but it also meant a lost oppurtunily to stay in a hotel other friends was staying so I feel bad about that.
Lovely Friday and shopping, well more like walking my heals off. Then Saturday walking twice to Teatro alla Scala. First dining near the duomo. Yep, expensive and still hungry 2 hrs later. Then back again for opera time. 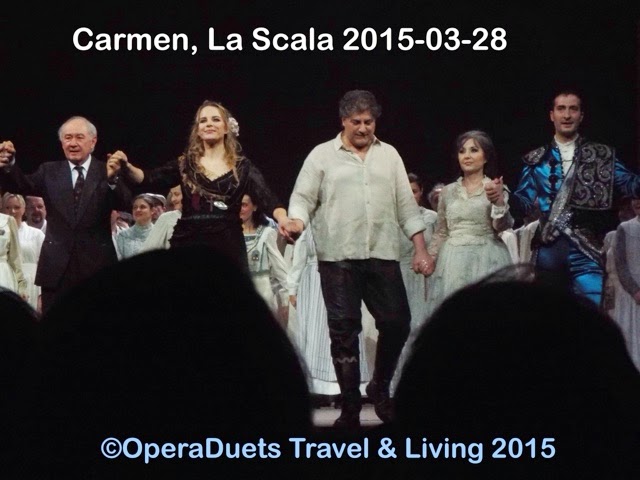 Some people boo other people. One man decided to make his BOO heard by waiting untill all the rapturous applause had almost ended after Jose Cura singing the most devine Flower aria. Obviously a Cura hater and not a music lover could do that.
2015-03-28 Carmen (G. Bizet), Teatro alla Scala (Milano)
Carmen = Elīna Garanča
Don José = José Cura
Escamillo = Vito Priante
Micaëla = Elena Mosuc
Zuniga = Gabriele Sagona
Moralès = Alessandro Luongo
Dancairo = Michal Partyka
Remendado = Fabrizio Paesano
Frasquita = Sofia Mchedlishvili
Mercédès = Hanna Hipp
Lillas Pastia = Rémi Boissy
Un guide = Carmine Maringola
Massimo Zanetti, conductor
Staging - Emma Dante
Sets - Richard Peduzzi
Costumes - Emma Dante
Lights - Dominique Bruguière
Choreographic movements - Manuela Lo Sicco
The staging and regie was in a way showing us a real Sevilla with a lot of reality but then Emma Dante had to add more to the stage. The adding to the opera and taking away some of the reality to put supernaturality into the stage, it was a hit and miss. Choreographic movements by Manuela Lo Sicco did not help. In the whole it was a miss, it was distraction and it was not needed. Lovely as some of the ideas was, especially with Micaela, it was superfluous and most fatally it threatened to make the opera less.
The orchestra was good but even the maestro Massimo Zanetti could not prevent it to sound shrill at times. The singers was wonderful, their acting superb and so it was a Carmen to enjoy. I had what I would usually call the misfortune to have a tall man sitting in front of me. This time it was a blessing I could miss some of the most unfortuned addition and enjoy the opera. So long I could view the principal singers I was in for a treat.
Emma Dante did find ways to put children everywhere and some extra dancing movements here and there. That could have been lovely but it was destroying the reality of Sevilla, the reality of Carmen and Don Jose. And I wanted it to be real. Was it really necessary to make so many references to the Catholic church? Not in my mind. It was a nice touch to dress Micaela in black only to show her in white by just not holding up the black fabric and voila Micaela is in white during the duet with Jose. Church boys giving her a white veil and now she looks like a bride. But no kiss, not from Micaela to Jose or from Jose to Micaela. So it is no surprise that Micaela is followed by a priest to the smugglers nest. The whole black to white changes again and now Micael has graying hair, why, to resemble the mother of Jose and they cleverly make it seem she i laying in bed being his mother praying for him. Two nice touches that worked but the rest was just nothing to go bravo about.
Elina Garanca and Jose Cura was wonderful together and alone. Elena Mosuc was an amazing Micaela and the baritone Escamillo was not bad. The singers saved the day!! Jose Cura was in top form and I enjoyed Elina Garanca. 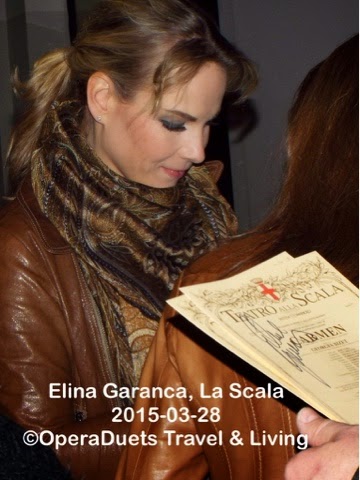 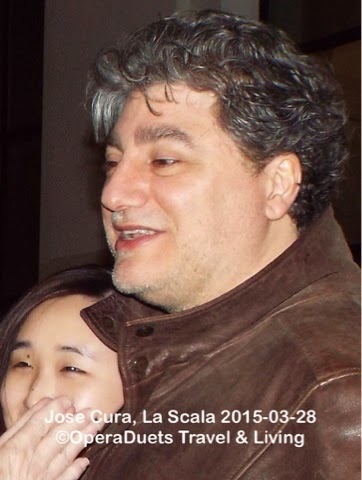 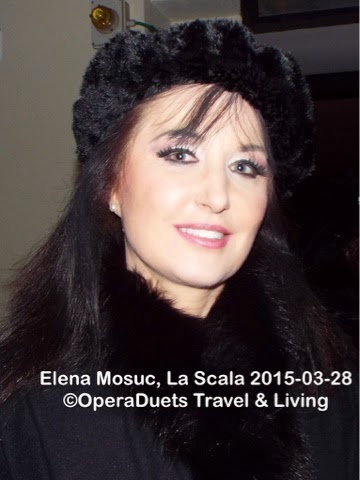 Written by operaduets on Monday, March 30, 2015 No comments:

From Hamburg to Madrid, from tragedy to comedy: La Grande Duchesse de Gerolstein 2015-03-21

A month later after Elektra in Hamburg to Madrid for a French operetta in Spanish in Madrid. Teatro de la Zarzuela could not boast of the greatest international stars of opera as Hamburg butbthe subject was much fun and Spain can boast of growing the great voices of the future.
I nearly did not get to see La Grande Duchesse de Gerolstein because theree was a manifestation in Madrid which meant that the inner city of Madrid was almost closed. But lucky for me it opened up enough and I was in time. i even got to buy chicken wraps and something to drink.
http://www.operaduetsphotos.com/Gerolstein/2015_0321.html 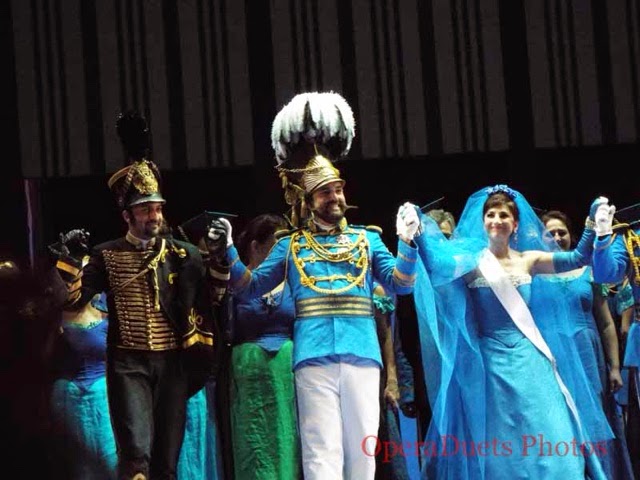 In short I really did not have much time in Madrid and that meant more enjoyment pr second. I managed not to fret when I was in the taxi and the minutes going towards showtime. Not to  forgot that I won the most wonderful chicken wrap and the show was good.
2015-03-21 The Grand Duchess of Gérolstein (Jacques Offenbach), Teatro de la Zarzuela (Madrid)
LA GRAN DUQUESA = Susana Cordón
FRITZ = José Luis Sola
WANDA = Elena Sancho
EL CONDE PUCK = Manuel de Diego
EL GENERAL BUM = Gerardo Bullón
EL PRÍNCIPE POL = Gustavo Peña
EL BARÓN GROG = Francisco Crespo
EL CAPITÁN NEPOMUCENO = Enrique R. del Portal IZA = Leonor Bonilla
OLGA = Nuria García
AMELIA  = Ana Cadaval
CARLOTA = Hanna Moroz
Bailarines
Estíbaliz Barroso, José Ángel Capel, Araceli Caro, Íñigo Celaya, Estefanía Corral, José Antonio Domínguez, Alberto Escobar, Daniel Ramos, Susana Román, Sara Peña
Figuración
Ariel Carmona, Javier Crespo, Pablo Garzón, Javier Martínez, Iván Nieto, Joseba Priego, Marcos Rivas, Pedro Ángel Roca, Robson Dos Santos, Israel Trujillo, Gustavo Adrián Villalba, Álvar Zarco
Orquesta de la Comunidad de Madrid
Coro del Teatro de La Zarzuela
Director:
Antonio Fauró
Music director:
Cristóbal Soler
Stage director, sets and costumes:
Pier Luigi Pizzi
Zarzuela bufa en tres actos y cuatro cuadros, basada en la ópera cómica de Henri Meilhac y Ludovic Halévy
Traducción de Enrique Mejías García
Music by JACQUES OFFENBACH
Worldpremiered at Teatro del Circo in Madrid, November 7, 1868
Producción del Festival de Martina Franca del Valle d'Itria (1996)
The Teatro de la Zarzuela can call it a zarzuela but it still is a Frenche operetta translated to Spanish. A great translation made by Enrique Mejías García.
Susana Cordón was the Grand Duchess of Gerolstein, a young lady of 20 years who is in love with the military life and the men. Wonderful singing and great acting from Susana Cordón. She falls in love with Fritz, the soldier who by decree of the High Duchess goes all the way up to General and back again to soldier during the performance. Tenor José Luis Solawas a wonderful Fritz. Fritz is in love with the lovely Wanda, a village girl with virtually no education. Soprano Elena Sancho was a lively Wanda, and naturally she too was wonderful almost upstaging the Grand Duchess. General Bum was just as admirably sung and acted by Gerardo Bullón. General Bum never wins Wanda from Fritz but in the end he gets the general plumes back from Fritz. Baron Grog, Francisco Crespo, almost got the plumes from the Grand Duchess but when he outed himself as married then Grand Duchess decided Bum got his plumes and Prince Pol would get a Grand Duchess who would be faithful since married men was not OK even for Grand Duchess. Prince Pol, Gustavo Peña, won the Grand Duchess of Gerolstein.
Lovely, wonderful, and of course J'aime le Militaire in Spanish and it sounds exquisite. Bravo, Teatro de la Zarzuela!!!
After the wonderful operetta it was a terrible shock to be musically assaulted by an unknown bass person singing as low as possible and only low and loud it was not a hint of musicality. The man thought probably that opera is about loudness but any opera voice need a fountain of musicality and a subtlety as well, it must flow and the singer needs to make it flow in the directions the music needs. This was just loud, and so sadly no Filip II in the making. So we all walked as fast as possible away from the noice pollution and to places where the loveliness of Offenbachs music could be preserved. Ah BRAVA, Susana Cordon!!! Viva La Grand Duchesse de Gerolstein!!!! And Offenbach is a cool guy!!
Yes, I got a taxi home to the hotel. And after some sleep it was early off to Barajas airport with courtesy bus. And via Frankfurt to Oslo. Waiting in Oslo and eating, of course. Then flight home and we landed. Home in late evening, relaxing. Monday work, again...
Written by operaduets on Sunday, March 29, 2015 No comments: