Wonderful holiday, but then I came home

And then I was going home. Early flight from Zurich, the airport was like a desert still because most shops was still closed. Finally I could buy some food and I bought 2 Brezels at the cafe close to gate A. I could eat. The night had not been too good but that was nothing to compare to later. On Monday 20th of June I ate the first Brezel and started my second. I still have not completely finished my second Brezel, but almost. I arrived in Oslo and I had decided to call the doctor to get an appointment, but I guess I was not really feeling up to anything except waiting for my flight home while gnawing on my beloved Brezel.

I came home. It was almost after working hours and I dragged me to the computer to do my photos: http://www.operaduetsphotos.com/CavRust/2011_0619.html
http://www.operaduetsphotos.com/Pagliacci/2011_0619.html
Naturally I had decided to blog and write 2 reviews. But I was not feeling strong and I was not eating much. The Brezel was my savior. Thinking ahead I was sure that tomorrow would be a better day and I would get my doctor's appointment and work as planned. I was wrong. I had pains in my stomach all evening and night and morning. My bowel seemed to have stopped, I did not know that. I only knew pain. And I finally dragged myself out of bed to call the doctor. As I got the time 1300, I regretted not taking the emergency phone number during the night or even in the evening. Confused, I did no longer know if my appointment time was 1300, I started to believe it was 1230. I went to my doctor office building dressed for a colder weather then it was with was I supposed would be enough ostomy equipment should my doctor decide to send me directly to hospital.

I waited in the waiting room, it was not too bad, not too noisy or something. Being sick is no game for the faint-hearted. I have with me something to drink, and I had not eaten since the night. Those annoying people kept popping out from 2 directions mumbling names, one never knew which part of your name they would mumble. Happily my doctor pronounced my name so that I immediately knew it was me. I was so grateful at that small grace. Then the doctor asked a few questions and sooner than I thought possible I was on my way in an ambulance. 2hrs in an ambulance laying on my back, being sick, but well enough to really find the long trip super-annoying. I really wanted to me in hospital sooner than later because the ride felt like a waste of time. I did nothing good for me when the nice paramedic told me I was really close when it 20 minutes left. 20 minutes that is not close, 5 minutes, yes.

Hospital. The communication between ambulance and hospital had not gone smoothly so nobody was there for me. Luckily I was not in a life and death situation, just life/life (life with pains / life without pains, or less pain). So no harm was done, this time. It took a long time to get enrolled, I was laying all the time. People was nice, things happened slowly, but at least/last I was at my hospital where I know so many nice nurses. Tuesday, Wednesday, Thursday and then Friday. So many nice people taking care of, but hardly any sleep. I was told repeatedly that my examination would most probably be proceeded by an operation of the ostomy. The examination, an endoscopy of my stoma, would eventually happen on Friday. And Friday morning came and I had my endoscopy which strangely showed very changes, only the top 5 centimeters was narrowing, so NO OPERATION NEEDED. Yet, anyway.

And then the bus home on Friday afternoon. I am home now. Am I well? No, but I am better. But no, I don't think I will travel in July to see Cura in Berlin and Guleghina in Peralada. Do I want to? Well, I am sure if I ever had the moment of feeling super-well that I would love to, but sometimes it is better to say no.


For more reviews from my travels, see www.operaduetstravel.com
Written by operaduets on Sunday, June 26, 2011 2 comments:

by J.H. Elliott made me think of writing this post. Unfortunately the great post that I composed in my head is gone so now I try something alike but different.

Just now what is on my mind is the white heteresexual, married man who pretended to be Amina, a lesbian in Syria. And when he decided to end the fiction for him, reality to other people that care about the rights of LGBT people around the world, he decided to let her be arrested. Naturally he never thought that his actions would hurt anyone. And so he calls it just A Hoax that got way out of hand. I never meant to hurt anyone. Intentions even when they are genuinely good cannot undo the real harm of actions and hurts that have happened. If only he had made it clear that it was all a fable intended to make people more aware, then... But deception is not good.


Another item on my mind is Tracy Morgan, a comedian in the US, who during a homophobic rant or comedy rutine said that if he found out his son was gay he would knife him to death. That some people can call that comedy, a death threat is no comedy. Coming out to one's parents as LGBT can be deadly, and that is not laughing matter.

: "But the strongest reminder of the Moorish past was to be in the extreme inequality between the sexes, which was much greater than in comtemporary nothern Europe, and which found its counterpart in extreme male gallantry towards the inferior sex".

This quote from 8 Splendour and Misery (3) The pattern of society. So what, some people would say? The inferior sex, why react to it. But can I stop being a woman, and therefore react to such un-needed wording. The word inferior is not neutral but negative. If he had put it in quotes I would not react so much. But the author born in 1930, the book was written in 1963. As a man in that time I am sure that Sir John Elliott never taught excessively about womens' viewpoints. Still he could have easily said "the fairer sex", and thus the negativity was out a bit.

Naturally THE INFERIOR SEX  and such pales when one realise the THE LETHAL DANGERS that LBGT people everywhere feel and live through. Still it should not have to become a LIFE AND DEATH thing before we react to wrongness. Besides, sexism is linked with patriarchy and so is homophobia.

THE INFERIOR SEX could be women, or men who is not seen as manly enough, it can be anyone, really. What does it hurt to be the inferior sex? It hurts inside and some people use it as a baseball bat to beat up people that are different (or inferior, as they see it).

Tom MacMaster (the blogger who pretended to be Amina) probably had his heart in the right place but he forgot to consider how his blogging could have an averse affect on real people. The is a lesson in that. Look around when you think you are doing good and right and see if there could be unintended consequenses. Never pretend you are something you are not, look around if you could be mistaken for an expert when you are just one person with an opinion. Don't lie!!


Tracy Morgans homophobic rant was bad. But that people should defend him, to say it is just comedy. A death threat is not comedy. A father threatening to kill his son, is no laughing matter. Is comedy really more worth than the lives and happiness of people?

is a book that I can recommend but it is not in really critical enough towards slavery and still have some idolized idea about Christopher Columbus luckily very little of the book is about America. Sir John Elliott is describes the different peoples in a somewhat racist light.
'
For more reviews from my travels, see www.operaduetstravel.com
Written by operaduets on Monday, June 13, 2011 No comments:

It started badly. I was still very tired after the night bus ride, 7 hours with some sleep. And then the plane to Dusseldorf was a smale plane with a low roof. But luckily I could sleep. Then we landed in Dusseldorf. It was easy to find our way and soon I was on my way on the sky train to the Dusseldorf Airport Train Station. But it was not free. Then I bought the tickets to and from Dortmund. I took the 1228 train and was in Dortmund hbf a little before 1400. Then I walled to my hotel, hotel Königshof. And everything should have been great. I would sms my parents that I had arrived safe and sound, and sent an sms to my friend so we could meet. But my phone did not find any mobile operator. Luckily my hotel has wifi and I had my Ipad so I could still contact my parents and my friend but it was not so easy to send an sms back to me. Hours laters I got sms they had sent me. Bad!!!

Then it was time for opera, first a meeting between friends. There was a delay and then I think still some mobile problems that was not helping. But finally we met and everything was wonderful again. Then the concert started. After 2 speeches Verdi's opera Corsaro was played. Zwetan Michailow was singing Corrado in stead of the original tenor who was sick, I guess. He did a fine job. But it was the women that ruled. Elena Mosuc was sensational and so was Maria Guleghina. Then men was fine but Elena Mosuc and Maria Guleghina was in another stratosphere. The conductor was also great. He made the orchestra play with a singular clarity and put forward all the wonders that lays in this score. The orchestra members seemed to love playing this music, one could almost look at then to see that to they had taken the music to their heart. The chorus was young and clear.

Now if only this had been staged too. 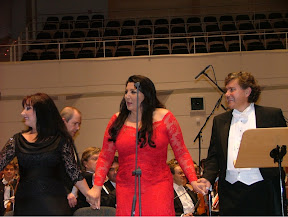 - Posted using BlogPress from my iPad
Written by operaduets on Saturday, June 11, 2011 No comments: