I almost called this post "Placido Domingo as Giovanna d'Arco". He would of course need to use his falsetto voice, and still people would be coming because Placido is Placido.

After Placido Domingo started his new carreer as Baritone I find myself enjoying more his Tenor voice. Placido Domingo is not a real baritone, even when he sings his baritone roles one hears the tenor, but he is an Artist, an Actor who can use himself so that the audience falls for it. The Young Tenor would never had managed it but it is the Old Tenor Voice that becomes Baritone because Placido Domingo has the innate ability to Act and just be. Naturally those Verdi fathers is becoming to the white-haired Placido Domingo, The Opera's Grand Old Man.

I bought the new CD of Giovanna d'Arco in Vienna. With Anna Netrebko as Giovanna d'Arco, Placido Domingo as her father Giacomo and Francesco Meli as King Carlo VII of France it could have been magnificent but it was lacking. Anna Netrebko has been hailed Queen of Opera almost as much as Placido Domingo is the King of Opera. It is not only making it difficult to get tickets to events with her but she is too popular for her own good. She sounded tired, streched out too thin in places. I wish her magnificence back and that I finally will get to see her live. Tickets, please! Placido Domingo is wonderful but one need only to her Sherrill Milnes in the same role to understand that PD is no baritone. But there is still much to love about Placido as Giacomo. Francesco Meli is the tenor, good enough but not exciting as Placido Domingo was when he sang Carlo. Delil was sung by Johannes Dunz, Talbot was Roberto Tagliavini. It was recorded in Salzburg with Philharmonia Chor Wien, Munich Radio Orchestra conducted by Paolo Carignani. Deutsche Grammophon.

The EMI recording with Montserrat Caballe as Giovanna, Placido Domingo as Carlo and Sherrill Milnes is the superiour recording. Montserrat Caballe is superb as Giovanna, Placido Domingo is magnificent as the King and Sherrill Milnes give with hos baritone voice Giacomo all the power that is needed. Keith Erwen as Delil and Robert Lloyd as Talbot with Ambrosian Opera Chorus and London Symphony Orchestra conducted by James Levine.

Last year I saw Giovanna d'Arco in Bilbao, Spain. What I remember best was Claudio Sgura as Giacomo, Giovanna's father. He was so powerful with his strong voice and personality. This opera is really a difficult piece especially for soprano and tenor. It is demanding that from the moment they step on stage they are to sing powerful arias, no chance to ease into the role. Just step out there and be ON.

Sorry, Placido!
Written by operaduets on Saturday, September 20, 2014 No comments: 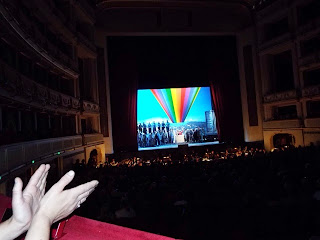