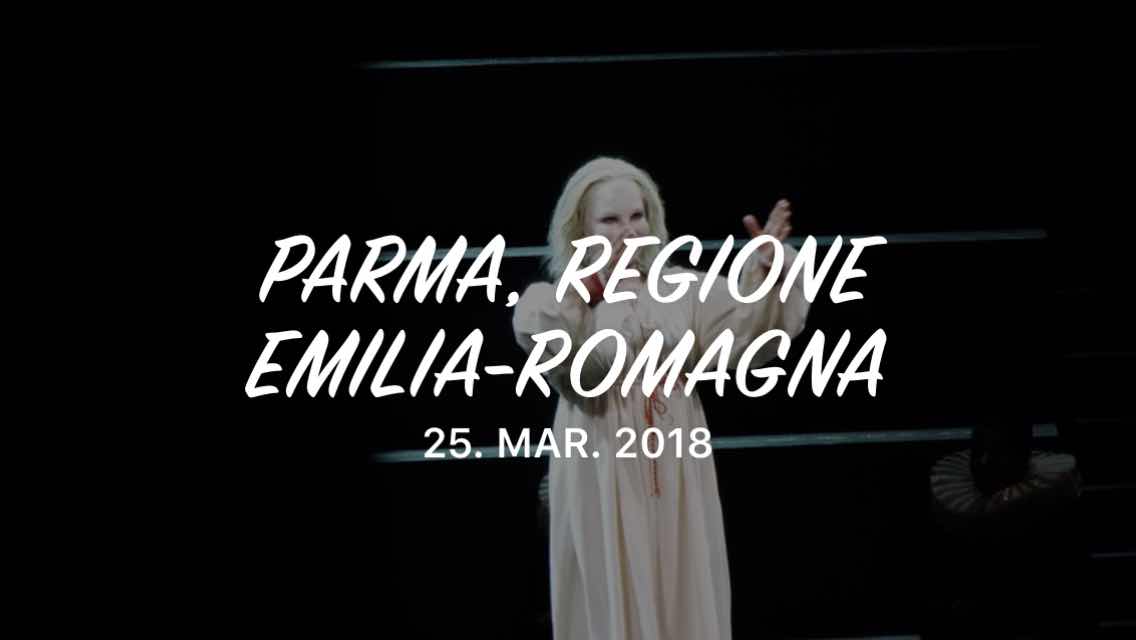 I was just thinking that it would be like another travel. I thought I was well. Summer time changed my plans but I thought it was a little thing. But it changed everything. I did not have enough time to eat properly before I took the bus to Gardermoen. Since the night bus would make me too late for the plane I had to go via Oslo Bussterminal and then the airport train. Saturday is over.
Palm Sunday and Summer time. My watch and I are on Wintertime.  The plane leaves at 6am, for me that’s 5. Little time too sleep and very little food do I have in me. Of course, I am on time for the plane to Malpensa airport Milan. Then it is too trains to Parma. I ate just one Foccaccia that day. Still I thought I was well. I changed my hotel after walking all the way to that hotel and then changed it to NH Parma close to the train station. Just being practical after all I will travel by train back to Malpensa tomorrow.
Going to the Opera after walking too much, no food, little drink. Roberto Devereux by Donizetti is boring compared to Anna Bolena and Lucrezia Borgia. I was ill. Pain and stomach noise. I survived and left while they were still applauding and cheering. Walking back to my hotel according to Google maps I never stopped walking until I taking the train to Milan.
2018-03-25 Roberto Devereux (Donizetti), Teatro Regio Parma
Elisabetta = Mariella Devia
Sara = Sonia Ganassi
Roberto Devereux = Stefan Pop
Il Duca Di Nottingham = Sergio Vitale
Lord Cecil = Matteo Mezzaro
Sir Gualtiero Raleigh = Ugo Guagliardo

Production from Teatro Carlo Felice,Genova; Teatro La Fenice di Venezia
Night to Monday was being ill and trying not to vomit until the night was nothing other than bed to wc again again and vomiting all the time. Somehow I was able to take the trains and arrive at Malpensa and then the direct plane to OSLO Gardermoen. On the plane I became the sick person on the plane. They took well care of me. Easter has been canceled for me.
This has been written on a hospital bed and after Easter I hope to come home.
HAPPY HOLIDAYS!
Written by operaduets on Thursday, March 29, 2018 No comments:

It was still winter in Norway and a birthday gift was about to be received. How would it be and who would be with me to the opera house in Oslo to see Bellini's opera NORMA.

Lucky to be over my pneumonia I came to Oslo and I stayed in a small apartment that my cousin found for me. It was OK. Cheaper than a hotel but very, very basic. But the main thing was that I was rested for my evening night out.

So we met 3 first cousins and one of use had her husband with her so everything was perfect.

ACT 1:
For me everything started just wonderfully. For them it was a slow start and they were right. Norma starts slow. But in other to fall into this bel canto world is that not the perfect way? We were just slowly soaked into the world of Norma. It was a revolving stage and it was simple: boxes that contains, hides, opens.

Oroviso, the druid appears and then the chorus came from the audience room to the stage. Oroviso was in costume as the Grand Druid, but the chorus came in their ordinary cloths. The voice of Oroviso changed all those ordinary everyday today's people into members of the druid religion. Ordinary cloths were changed into costumes belonging to the opera Norma. We were inside the opera.

Norma is comin... No it is Pollione and Flavio. Pollione who is not well and has asked us be merciful. No mercy is needed, this Pollione is on fire and he is strong and melodic, young too. I love another tenor!

Norma is coming. Norma! Who and what will we see? I know this opera so I am also looking for Adalgisa. Adalgisa is there but she is just another apprentice of Norma in the ceremony. Sediozi voci - Casta diva - Bello ... Wonderful singing.

Adalgisa. Finally alone she is on stage and finally we see Adalgisa. What a voice she has, beautiful and so big, powerful.

Pollione is upon Adalgisa. He loves her but does not care for her difficult situation. Leaving her gods and fatherland. She has given a sacred oath to be faithful to her gods and serve only them. She is devoted but now a man is between her and her duty. Devoted to fatherland, druidism and Norma, the chief-priestess and her best friend. Now she is in love and the man she loves is the enemy!!

Finally we are in Norma's private room. This is when the opera gets dramatic while it still the most amazing belcanto music and singing. Norma is conflicted. She is a Druid high priestess but she loves Pollione, the father of her children and he is the enemy. Fatherland/religion and a love that is against her religious vows and also goes straight against her love of the fatherland. She has betrayed both. Yet, she is still devoted. So her love for her children becomes tainted. She loves her sons because they are her sons and Pollione's. It is a love that she has to hide. The most violent conflict is all about love and duty. A choice she dreads. She wants Pollione to take her and her children to Rome as he has been called back to Rome from Sigambria.

Adalgisa arrives. Her conflict is to go with Pollione to Rome thereby leaving Sigambria and her sacred vows. Norma loves Adalgisa. Norma gives Adalgisa want she would have wanted her self, a release from the vows and freedom to seek love even if that means leaving the fatherland. One of the most beautiful belcanto duets comes. Oh, rimembrenza! Norma remembers her first love with Pollione while Adalgisa tells of the more recent love meeting with the same Pollione.

Pollione enters just as Adalgisa is telling who the man is. A furioso trio starts. It is the most divine belcanto and it is the most dramatic musical moment. Norma loves and hates Pollione and she loves and hates Adalgisa. She goes from defending Adalgisa to wishing her dead. Pollione is not conflicted. Adalgisa cannot and will not go with Pollione. He has betrayed Norma and he even has two sons with the woman that Adalgisa loves as a mother.

Norma is contemplation murdering her children. Their crime is to have Pollione as their. Norma loves her children so sometimes the reason to murder is so that they will not end up as Roman slaves. Norma wants to punish Pollione so that is a reason to murder them. In the end she cannot kill them. "They are my children!!"

Adalgisa comes in. She has been called by Norma. Adalgisa is willing to do all what Norma says. Except she will not go back to Pollione. That love has ended. Adalgisa's loyalty is only to Norma now. Norma pleads with Adalgisa to save her children, to protect and love her children when she goes to Rome with Pollione. In the famous duet "Mira, o Norma" Adalgisa gives a counter offer: the children will be with Norma and she will go to Pollione and persuade him to be faithful to Norma. Norma wants so much to believe this is possible and Adalgisa is too young to know that life does not happen like that.

The warriors of Gaul wish to go to war already with the Romans. Oroviso is very sad but he has to ask them to be faithful to the religion and what Norma (high priestess) says.

As Norma fondly is thinking about Pollione coming back to her and all happiness will come back Clothilde tells Adalgisa has not been successful. Now Norma hates Adalgisa, too. From best friends for ever to hate, that is Norma. Now Norma is ready to kill all Romans so she calls out. Gaul is now ready to go to war!

Pollione is back. He is madly searching for Adalgisa. He is caught. Finally Pollione is in her hands. She demands the prisoner and the right to secretly interrogate him. Because she is Norma she gets her will.

"In mia man alfin tu sei!" Norma and Pollione. Death threats against Pollione and then Adalgisa. At the same time Norma wants him back. In order for the war to successfully a victim must be found. Who will die? Pollione wants to die to save Adalgisa.

After this duet of passions and pleas all of Gaul is coming back to hear Norma's decision. An unfaithful priestess will die. Pollione is desperate. Norma cannot name Adalgisa, the young woman who has just started the same path Norma already had thread. Norma names herself as the priestess that has been unfaithful to her religion and orders the pyre to be lit.

Pollione suddenly understands what a wonderful woman he is losing in Norma (typical opera thing). So he is willing to die with Norma. Then Norma starts thinking about her innocent children. Oh my God, the children!!

Oroviso is the father of Norma. He is horrified that Norma is guilty. Norma pleads with her father to take care of her children. In the end Oroviso is in tears and accepts. Norma and Pollione go to the flaming pyre, to their death.

Bravi, tutti!
We all loved Act II the most for its drama.

But did it have to end this badly. The two lovers dies united as in the typical end of opera. Norma and Adalgisa could have raised the two children together in secret. Afterall Norma is not just about epic love. There is Epic Friendship. The two women should have forgotten Pollione, the useless man, and lived happily ever after. But no, Norma had to go bananas in true operatic fashion. BEL CANTO!!

Written by operaduets on Sunday, March 11, 2018 No comments: