My second opera travel in 2020: Meyerbeer in Berlin

So I am off again. Another opera travel to Berlin. This time my objective is to experience 3 operas by Giacomo Meyerbeer.
On Thursday 5th I finish early at work. I go back home to see if I have everything ready. Still I forgot something. Maybe I will find it in Berlin. Bus to Oslo 7hrs, train to Airport and then bus to my hotel.
Friday March 6th I wake up at 5, breakfast and then bus to the airport. At airport 05.50. There I check in my luggage and then security and then wait for boarding. Last time I used EasyJet and landed in Berlin Tegel airport, now it is Norwegian Air Shuttle to Berlin Schönefeld Airport.
From Schönefeld I went by train S9 to Zoologischer Garten and then U2 to Deutsche Oper and soon I was at my hotel room. 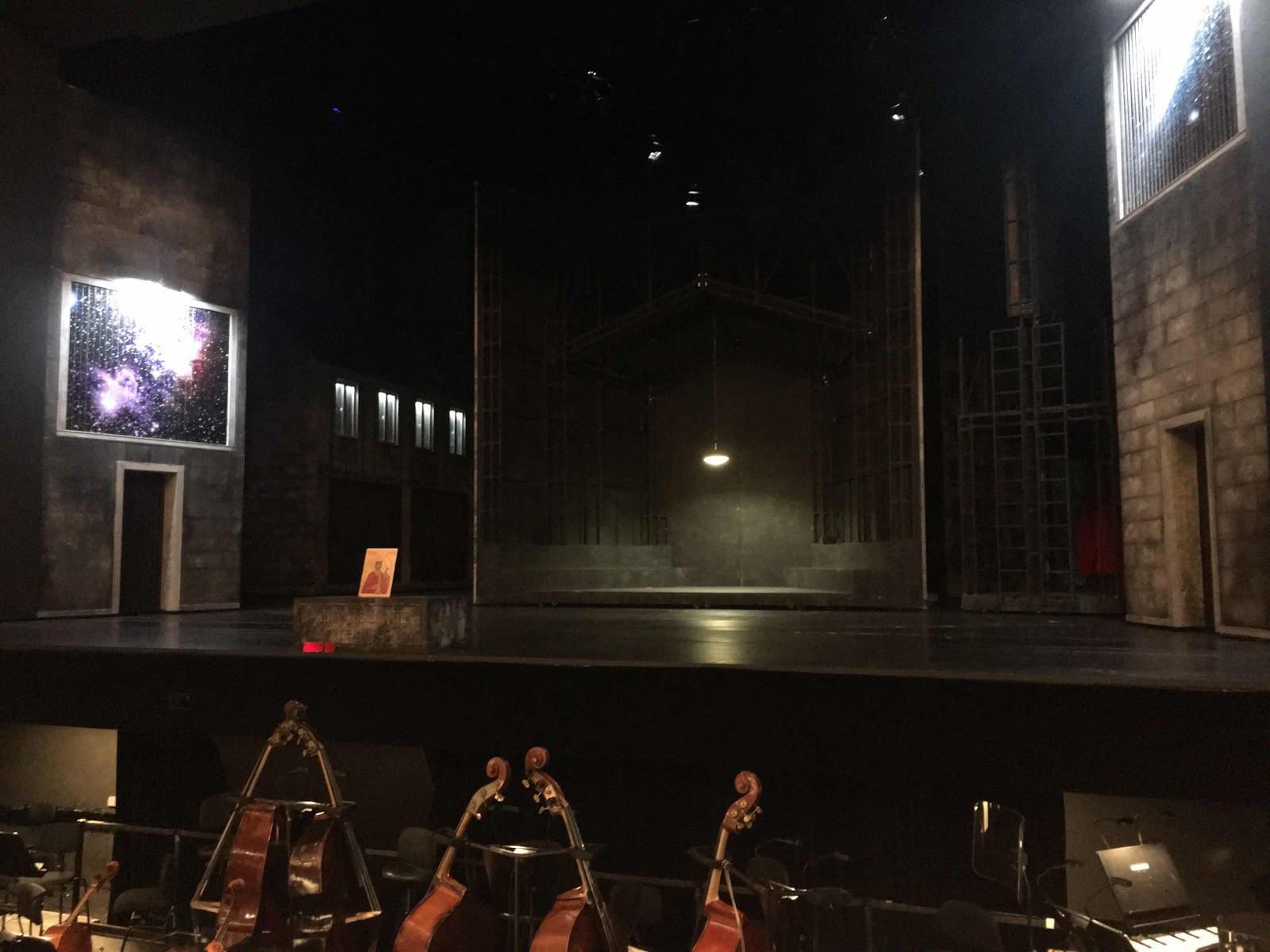 March 6, 2020.
Le Prophète by Giacomo Meyerbeer at 1830 in Deutsche Oper Berlin: music and singing was wonderful, the Regie less so. Was all the violence, rape scenes and nudity necessary? And why did Oberthal win in the end and Jean ends only his own life. But the singing was divine, especially Clémentine Margaine, our Fidés. Brava!! Bravissima!!!
Saturday March 7, 2020.
Dinorah by Giacomo Meyerbeer at 1930 in Deutsche Oper Berlin. Opera Konzertant with Rocío Pèrez as Dinorah. She sang and acted superbly. It was a great opera evening!!!
Sunday March 8, 2020.
The opera starts at 1600 and lasts 5 hours. Les Huguenots by Giacomo Meyerbeer. Wonderful singing but I need time to digest the whole production.
Monday March 9, 2020.
And now the travel home again. But I will not go by bus from Oslo Gardermoen airport, I will go by plane. Double prize but I am home much earlier.
Written by operaduets on Monday, March 09, 2020 No comments:
Email ThisBlogThis!Share to TwitterShare to FacebookShare to Pinterest

When I came into the famous Staatsoper I suddenly realised that this was not only Medea in French but also with French dialogue. So this was not really the whole opera MEDEA but a inferior Medée. The cast was wonderful. The set design was ugly. The Regie was not true to the music or dialogue, it was on sometimes but then terribly off.

Oksana Lynov conducted Staatskapelle. Already in Ouverture I heard something was not right. It was not the ouveture that I had listened to when listening to Maria Callas studio and live recordings of Cherubini's opera Medea.

Then the opera started with Dircé's supporters holding her arms in an torturous grip while singing why is Dircé not happy with her coming marriage to Jason. Serena Sáenz had a beautiful soprano voice and I was thinking this Medée might just be good even if the Regie went against the happenings on the stage. Aytaj Shikhalizada was a mezzo soprano but her voice was not so pleasant to the ear. It was no doubt a large voice but it was fuzzy and it was not together. Then our Dircé sang.  Slávka Zámečníková has a wonderful soprano voice and it was a joy to hear her aria. Unfortunately the regie was not on her side.

Then came the first French dialogue. The Staatsopernchor sang well. This is Medea, a Greek tragedy. But the set design is a just dull, white, ware house dump. No king, just a greedy man who wants all that Jason have robbed/bought with his wife Medea. So how to get rich, marry my daughter to Jason of the Golden Fleece etc. And the Regie even have Dircé who does not care for Jason or his children, when in original opera it is Glauce (Italian name for Dircé) who asks her father to spare the children of Jason. But we have the stupid French dialogue where we could have had great singing.

Jason is already cheating on Dircé with one of her supporters (the mezzo). He shows little care of his sons on stage. Then we have Francesco Demuro singing Jasons aria where he is showing Dircé why he left Medea, his cruel wife. When Creon, Dircé's father, sings he is dignified, in dialogue less so. Iain Paterson was singing Creon well. Finally Medea arrives, unfortunately dialogue followes. Creon and Dircé sang in outrage. Creon tries to hinder Direé to have her say (Regie idea). Not a great family life.

Before Medea can sing, we have to suffer more dialogue. Then Sonya Yoncheva can sing Medea's aria. Before the duet between Medea and Jason, more dialogue. And then the fire can burn in this fiery duet. Jason in this production does not love Dircé but he is really still into Medea. Hates her but needs to touch her.

So much great music was never played and sung because of French dialogue.... But the singing when allowed was great so that one could believe this was Medea.

Medea was still a real Medea. But her entrance could have been great.

I cannot go on. Other than say I got half an opera for the prize of a whole one. Sonya Yoncheva was dressed and acted as Medea and sang like a goddess. The whole cast was wonderful but the choice of gutting the opera with French dialogue, ugly set design and a regie that wanted to tell another story.

The natural beauty of this opera was destroyed by the dialogue, only when there was no dialogue only music was the opera really alive. Yet, when the opera was over, we felt a high but it was really only because of Sonya Yoncheva.

But I missed so much music and singing. Youtube with the whole Medea in Italian with Caballé and Carreras
https://bachtrack.com/review-medea-yoncheva-castronovo-breth-barenboim-staatsoper-berlin-october-2018
"The problem, to paraphrase that same booklet note, is this: how to get an international cast of singers to make sense of the tirades of classical French verse that fill out the gaps between musical numbers. In the later 19th century, and when Maria Callas gave the work a boost in the mid-20th century, the answer was to perform it with inauthentic recitatives."

I love the inauthentic recitatives because that gives Medea life.

Written by operaduets on Thursday, February 27, 2020 No comments:
Email ThisBlogThis!Share to TwitterShare to FacebookShare to Pinterest

My first opera travel in 2020: Medea in Berlin

After work I went directly to the bus stop and soon I was off. Thursday 20.2.2020 was alright but on the mountain it was stop and go, stop and go, but very slowly. So that is where I and a lot of different cars, buses and trailers. 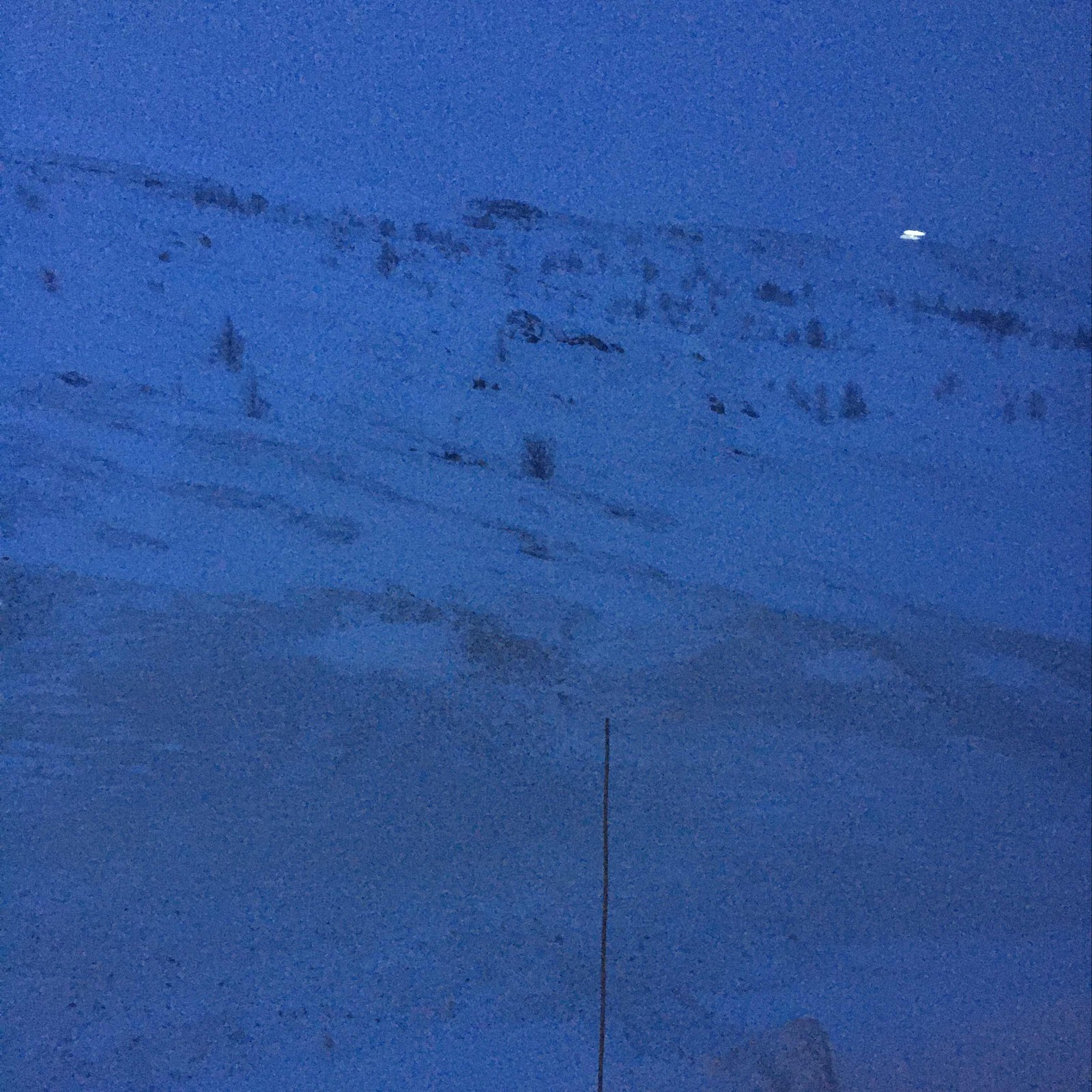 2 hrs delayed to Oslo. 2330 at my Hotel. Slept well.
21.2.2020 off from my Hotel to the AirPort. Will the flight also be 2 hrs delayed? No, but every passenger of the flight to Oslo was checked hence a delay. Fully booked plane means further delay because of the luggage. Efficient staff means we might be off just 10 minutes delayed, or... Well, we arrived at Tegel AirPort 10 minstes ahead of schedule so that was good.
Then it was bus and u-bahn to my hotel. The hotel has a godspot for internet. The internet is spotty and not secure because the Evangelical Church has no interest in your data. Really? Other people are free to play with the data. There is also a chapel in the hotel. I had no clue that the hotel was religious, Christian in all deviousness.
At 1530 I have arrived and I am looking forward to Medea by Cherubini even if it is sung in French. No Callas as Medea, not even Caballé, a mere mortal will sing the role of the witchious Medea. 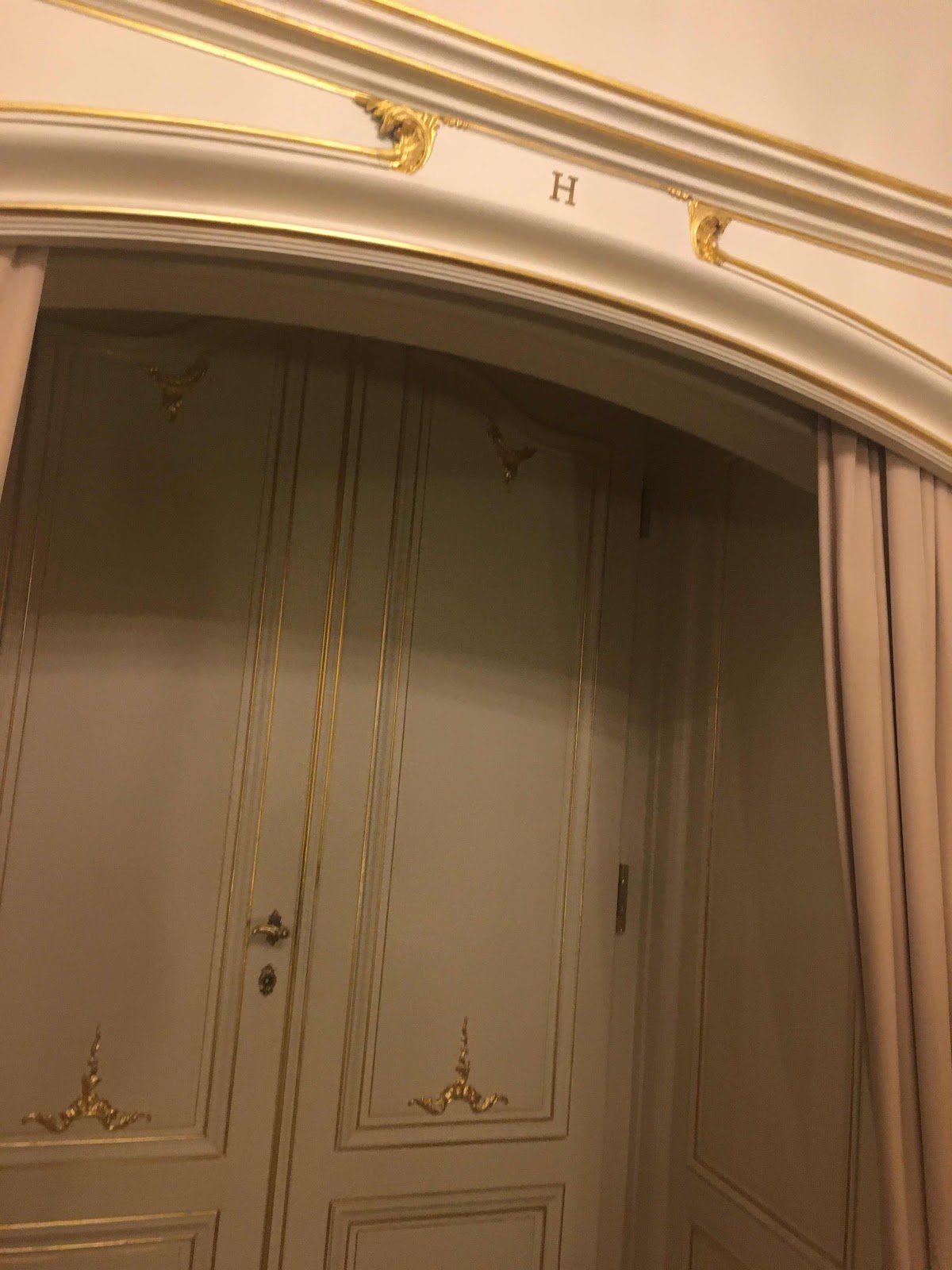 Staatsoper Berlin, 2020-02-21 at 1930:
Medea (Medée) was sung and acted by Sonya Yoncheva. A Medea to die for. All other roles was also sung and acted marvelously. It was stunning but there was a dissonance between the text and the production. The production was good but with a better eye to every detail it could have been so much better.
Cherubini composed Medea. It is a great vehicle for soprano to be Medea. This was a different Medea, not just that it was sung in French but it even had dialogues. Already in the ouverture I heard a different music than in my 3 opera cds with Maria Callas. So this was not the usual Medea it had many small differences from my usual Medea. Musically the chances was not at all bad. The dialogue is another issue. The singers was great in the dialogues but did the dialogues belong there. I would have enjoyed more a fully sung opera.
Poor Dirce, she has to marry Jason who is already cheating on her. But the aria is like she is just in love with Jason and terrified that Medea, Jason’s wife will turn up. Her father wants the riches that Jason has wun so he is eager to marry off his daughter whatever she wants it or not.
Jason must sing of love of Dirce, but he is kissing her handmaiden. He supposedly love his children but show no care for them until they are in mortal danger. He hates Medea in his singing but touches her as he is truly attracted to Medea.
Medea is a stranger. She is acting strangely and she is powerful and seductive. She loves Jason and her children. But in her anger she is in the end willing to kill her children to punish their father. Gloriously sung and then it ends.
After 3 hours with one short interval after act 2 we stumbled on to the streets of Berlin still dazed by Medea, by Sonya Yoncheva. Wow!
Then off to sleep.
2020-02-22 Saturday
A cold and windy day in Berlin. I go shopping in Alexanderplatz. Getting headaches. Eats a pizza. I will buy a hamburger from McDonald’s and eat it at my hotel.
2020-02-23 Sunday
Travel home.
Written by operaduets on Saturday, February 22, 2020 No comments:
Email ThisBlogThis!Share to TwitterShare to FacebookShare to Pinterest 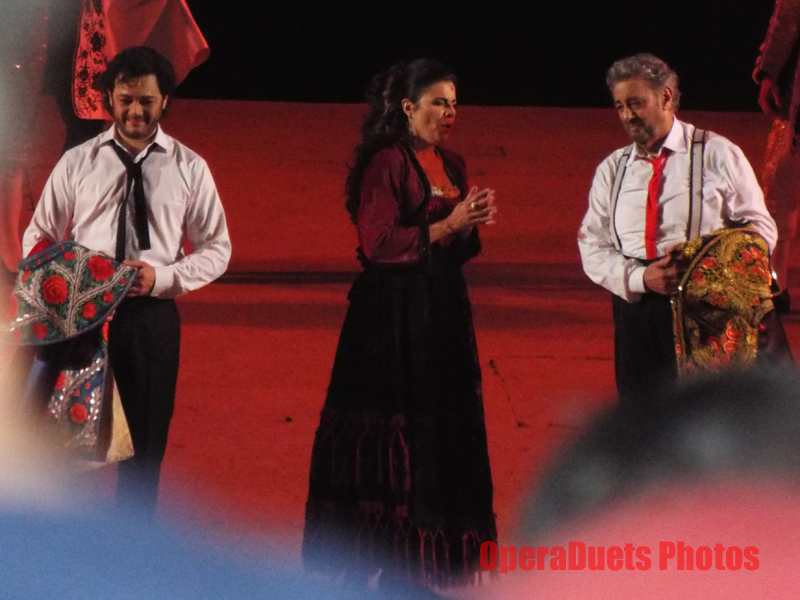 Written by operaduets on Monday, January 06, 2020 No comments:
Email ThisBlogThis!Share to TwitterShare to FacebookShare to Pinterest

But I have seen it theatrically in Bilbao in 2013.
http://www.operaduetsphotos.com/GiovannaDArco/2013_0921.html 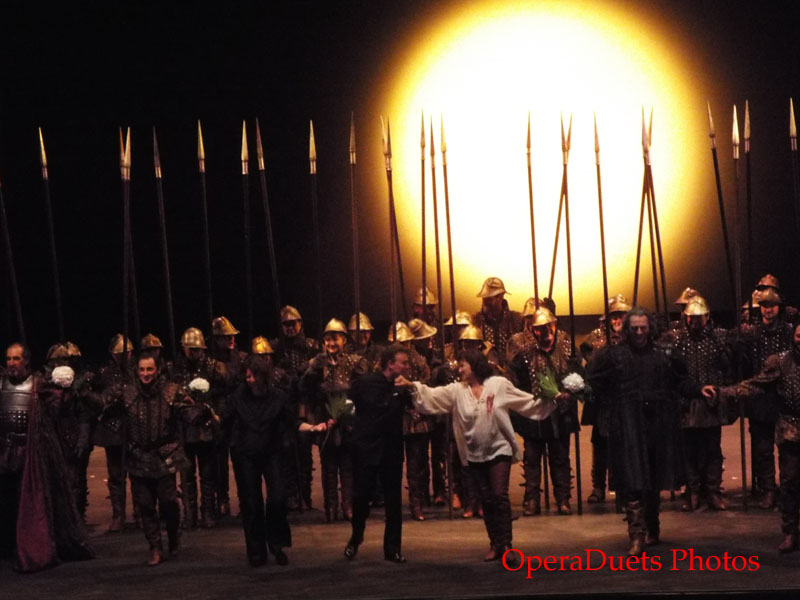 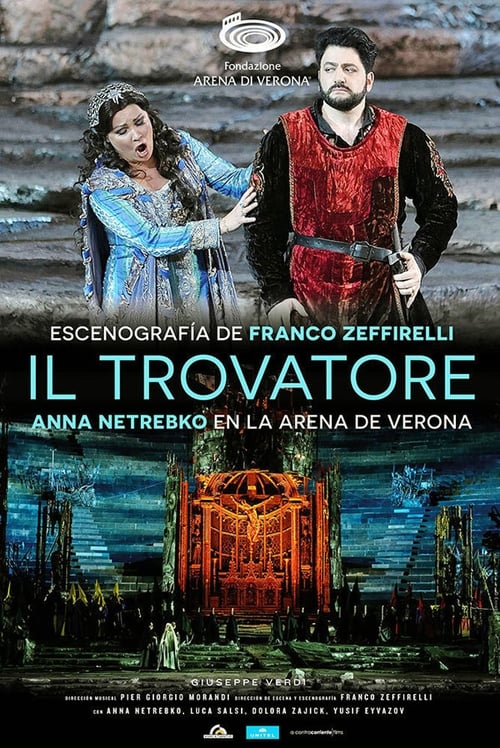 Luckily I saw it on 3Sat at home. Loved it.

But I had seen it before in Verona: http://www.operaduetsphotos.com/Trovatore/2013_0724.html 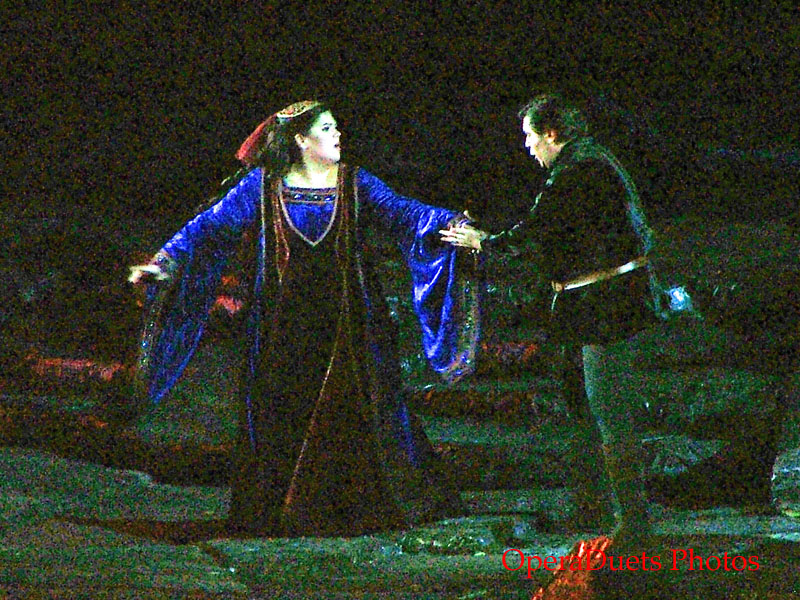