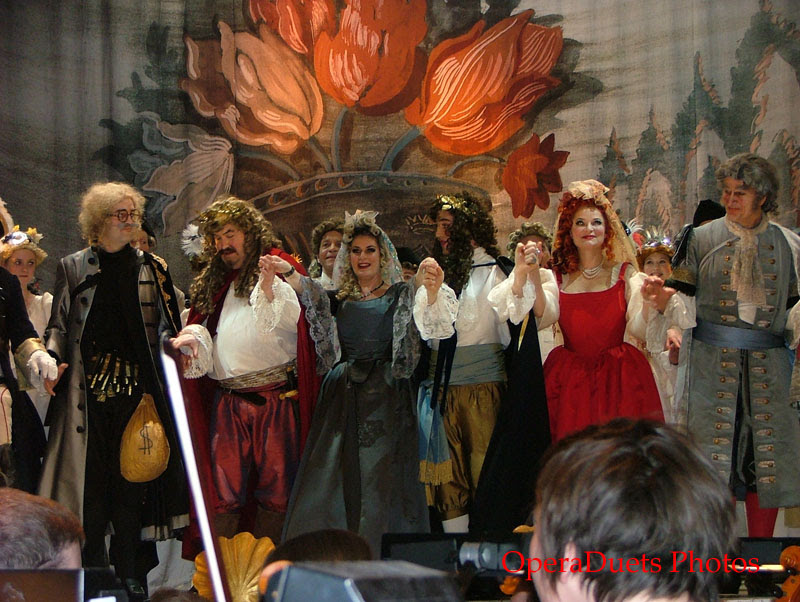 Un Giorno di Regno, or Konge for en dag in Norwegian, is simply Giuseppe Verdi's most wonderful comedic opera. It was simply the most fun you can ever have in an opera. The genius of Giuseppe Verdi together with Ronald Rørvik's Regie. It proved you can laugh so much and have so much fun your face seem  to have been massaged through and through. One can listen to the Philips recording with Jessye Norman, José Carreras, Fiorenza Cossotto and Ingvar Wixell and hear it is beautiful music but to really get into the fun one would need to go to Kristiansund and see Rørvik's production. On Youtube one can see parts of Parma's production with great singers but for the fun one would need the Kristiansund production.

The chorus was a great part of making this production so special. Every single member had their job and did it magnificently. It was beautifully done with a musicality that was amazing. A choreography that never felt forced and always seemed right. Everyone could act towards their strength. Whatever your body-type were or whether you needed glasses everything could be used to enhance the story. It was brilliant. That the beautiful and young man that was Belfiore, Lars Eggen, was simply made into just the right type for the fake King Stanislaus. Eduardo was sung by Kristian Krokslett, a chubby man that did not look like the young lover Eduardo. What a tenor voice and a true comedian!!! Of course this production worked even better like that. In an ordinary production. Both Belfiore and Eduardo would have been looked upon as miscast. But no, they were brilliant. What to say about the rest? Simply that they were brilliant. Itziar Martinez Galdos was amazing as Marchesa del Poggio. Anna Einarsson was simply beautiful in every way. And they could be serious and comedienne. Trond Halstein Moe was the most unhinged Baron Kelbar, simply genious. Sverre Johan Aal was a great La Rocca. Bravi, tutti!!!

Going to Kristiansund was easy. Coming home Sunday 17th was not. First the bus from Kristiansund to the airport did not go. So I had to pay 250 NOK for the taxi ride. Security and then waiting for the plane but it has landed in Molde. So an 1 hour trip with bus there. Then off to Oslo. In Oslo, walking hard to get my plane. YEP, amazing trip!!!

Written by operaduets on Monday, February 18, 2013