Of course it all started with the night bus to Gardermoen. It was full. But I slept sometimes. No rest in the airport. My flight was early and directly to Vienna. After I found my hotel and got my room quickly. Did not have to wait until 1600 which would have been dreadful. So naturally I coud have slept and then be ready for Otello at 1900 with Cura, Harteros and Hvorostovsky. I still don´t see why I could just not do that. So I was positively sleepy when I arrived at the opera house. Even as I forgot to rest myself up I had remembered to eat before opera. And that is always good. 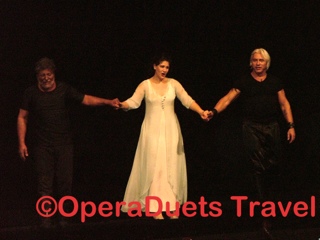 2013-09-14 OTELLO (Verdi), Wiener Staatsoper
Otello = José Cura
Desdemona = Anja Harteros
Jago = Dmitry Hvorostvsky
Conductor Dan Ettinger
When the opera started I thought the production would be about Martians and Otello coming home in an UFO. But no, this production was about colours. The light had a busy evening, going from all different colours. The coloring seemed to follow the score and the feelings. A wall of video of waters, the sea frothing in colors matching the partiture of Verdi (I guess). Other than that it was Desdemona dressed in white, angelic and pure (you know), the powerful ones in black and white except Jago, he is evil (you know). The people in black but red hands, and Nothing Explains That.
It was a very static production. The good news is: I did not fall asleep and José Cura was wonderful even though the production was eh, and he had severe back pain. Cura, the hero, fought to bring some real passion here. He even used the pain he was in physically to make his Otello really come through. A true warrior. Anja Harteros voice may not be perfect for poor, innocent Desdemona. But she is really the Soprano at the moment, wonderful in her Verdi roles. Hvorostovsky became better all through the evening, but I realised that I love deeper voices as Jago, like Ruggero Raimondi etc.
Poor Cura! After the opera he had to meet his fans at the stage door. Inside it was hot from all those fans. Outside it was rather chilly. He loved the conductor, Dan Ettinger. As a conductor himself he should know, and after so many Otellos, he knows. 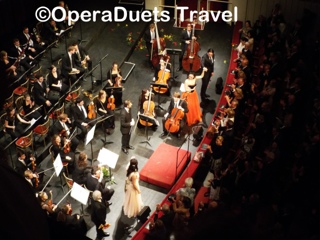 2013-09-15 Carreras and friends in Wiener Staatsoper.
Of course the MatinéKonzert with Josep Carreras and Friends was something different than Otello with  José Cura. For 6 Euro what can you get? Balcony seat high, high up where you cannot see the whole "stage". Tragically I was on the wrong side. This time left was wrong. I could only see Carreras by leaning out. So I sat and saw him seldom. But I could hear. It was a wonderful concert and I hope it brought a lot of money for the Carreras foundation to fight Leukemia. www.fcarreras.org
That was 11 to 1330 and then I waited for Carreras, And then I gave it up. But I did get photo of the conductor David Gimenez Carreras.
Evening 1830-2130 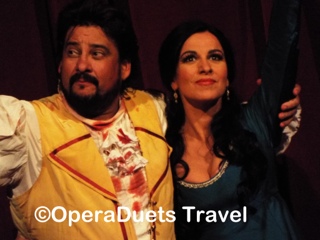 2013-09-15 TOSCA (Puccini), Wiener Staatsoper
Tosca = Angela Gheorghiu
Cavaradossi = Marcelo Alvarez
Scarpia = Zeljko Lucic
Conductor Marco Armiliato.
And a happy opera night it was. The production was TOSCA and no nonsense here. Marcelo Alvarez was a great Cavaradossi. He had a wonderful E lucevan le stelle. Angela Gheorghiu´s best moment was Vissi d arte and the last act. Zeljko Lucic was too mellow, strange since he is such a powerful Jago.
Angela look good, except a bit too skinny. Her voice often lacked some of her usual power but that could be just where I sat. I want Angela Gheorghiu to be healthy and happy so she need to remove herself from unnecessary emotional drama in her life and eat right and enough. I know this advise is annoying and difficult to follow. But she is not me, she has discipline and is a Great Soprano. She will conquer!!
Written by operaduets on Monday, September 16, 2013