I almost did not get there. First I had a head-ache so severe that I had to go early from work and then straight to bed. So it did not seem to be a good idea to travel to Berlin this week-end. Two hours sleep and rest and then I could not be in my bedroom anymore. I was starting to feel much better.

Thinking about my travel to Berlin I realised that since I was taking an early flight with Air Berlin I would be able to get some sleep in my hotel before even going out on Saturday. I phoned Hotel an der Oper for some information and they were positive. So I dined and then made my last preparations and off I went.

Night bus to Gardermoen. 7 hrs and some sleep. Then fast through security and soon off to Berlin. It was just a bit over 8 in the morning when I arrived in Tegel airport, building C. I had some difficulty at first to find my bus. After asking for directions I quickly found the bus. I had naturally looked it up in Google maps but still I missed the nearest stop which was Bismarckstrasse I thought the end stop Zoologischer Garten was my stop.

At Zoologischer Garten U-Bahn station close to McDonald's was where I realised my error. But I was not lost. I had my Iphone with Google Maps and I turned on the 3g and then I could just go. Google Maps was good but I got lost at Ernst-Reuter-Platz. Then I was unlost again but not after going almost the whole circle. Then, finally at 10 in the morning, I was inside Hotel an der Opera and I got a big, nice room in the 4. floor. Internet was free and I got 2 vouchers but it was a very on and off experience. Mostly internet was off and unavailable so I had to be on 3g if I wanted some internet access. Not bad but it is not free to go roaming on 3g.

Nice to be in Berlin. To be able to collect my ticket by walking over the street. Bismarckstrasse, lots of cars. It took me 10 minutes just to cross the lanes. Later I learnt how to make lights go green faster. I was in Berlin doing nothing. Just relaxing in my bed. Finding out where my bus stop was and how long time it would take to go there. The bus was going to Tegel airport every 10 minutes from Bismarckstrasse bus stop. Then I found a shopping centre and gave that up. I found the restaurant to have my dinner on this walk to. It opened at 16 it said. After more rest, listening to music, I was there 1645 and they were open but still vaccuming. So yes, they said, I was early but I was given a seat and the menu.

The Don Giovanni restaurant was just what I wanted. The background music was not too bad. The service excellent and I loved my Don Ottavio pizza. The perfect pizza for me. I drank Cola light, naturally. And it was just perfect. I realised then that although I had just changed my stoma plate and pouch it was leaking. So I had just pay NOW. Then I paid and went with unseemly haste. Now I was even more carefull to make sure that my opera evening would not end like my dinner did. This time I must have done it right so I was saved, at last.... 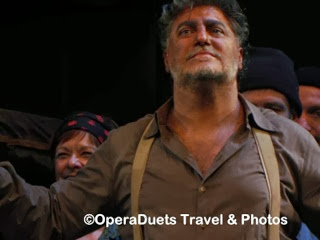 I had forgotten how much I disliked this production when I saw it at the premiere, 30.05.2010. I felt no outrage this time just boredom. It was the female ballet dancer in the back of the stage that annoyed me. The dancing was as a comment to Jago's narration of the Cassio's dream. In one way a good idea. But the placement of the dancer in the stage room meant that I could either watch the dancer or the singers, and that made it a bad execution of an idea that could have been good. I wanted to see and understand the dynamics between Jago and Cassio but the movement of the dancer forced my eyes away from my goal. Putting distractions onstage is not good theatre. And do untimately this is the failing of the director Andreas Kriegenburg, the production itself works as a distraction against Verdi's Otello.

In midst of it all, here comes Otello, Jose Cura. Placido Domingo used to be the ultimate Otello, now we have Cura. From the moment Jose Cura comes in it becomes a better show, finally it is possible to throw oneself into the work. I have seem him several times as Otello before and in different productions but this was the best performance with the most beautiful and sublime phrased singing and a overwhelming acting. He was good before too but here is the matured Otello, the excellence that comes from being Otello in so many different productions.

In one way we could say Cura singlehandedly a dull production to an exciting experience. To be fair I must say that Donald Runnicles conducting was a great part of the success. Marco Vratogna was singing and acting as if the role of Jago was tailormade for him. Barbara Frittoli was excellent as Desdemona, so warm. The vibrato was heavy in the first minutes but then the nervousness left and the lush, warm tones shone from Barbara Frittoli. Katarina Bradic sang and acted Emilia wonderfully. She made fine portrait of her role. Matthew Newlin made an excellent debut as Cassio. He was a joy to see and listen to.

After such a fine opera evening what can be better than to meet afterwards "backstage" with fans from  the Nordic Countries, Germany, Austria, Hungary, France, USA to name a few places. I guess Marco Vratogna was the MC-guy, Barbara Frittoli was also soon off. Jose Cura talked to his fans while the photos was flashing. 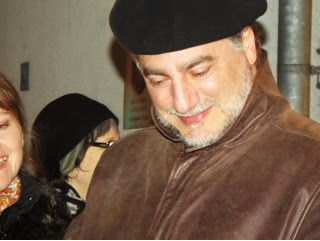 Then Saturday ended on this happy tune. After a good night sleep, breakfast alone and with friends it was time to go home. Bus to Tegel airport. Building C, gate 47, and then off to Norway. In Oslo it was airport train to Oslo main station, then bus back home. Home and it is 10 in the evening, 22.

Written by operaduets on Tuesday, November 12, 2013