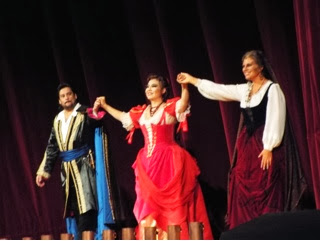 The solution was in both cases to have the best singers that sung and acted superbly. What ever the beauty or cruelty that was to be seen we had in both cases directors who knew what they were doing. The director managed to create with these excellent singers the web of relations between individuals that create the feeling of truth.
Hui He was La Gioconda, she was truely La Gioconda, and a great La Gioconda, too. Very unlike Violeta Urmana's La Gioconda from Paris Bastille, but the was a completely different production. Hui He was the right choice in this production. As her mother, La Cieca, we had Dana Beth Miller and she owned her role. Like in Paris Marcelo Alvarez was Enzo Grimaldi. I found him even better in Berlin. He was marvellous in Paris, but in Berlin better. Lado Ataneli was a great Barnaba. Ante Jerkunica was a young and splendid Alvise. Marianne Cornetti was Laura, wife of Alvise and rivale to Gioconda for the love of Enzo.
La Gioconda is a street singer who profoundly loves two persons, her mother and Enzo. La Cieca is Gioconda's blind mother, a devoute woman who loves her child, La Gioconda. Enzo Grimaldi is a Prince that Alvise has outlawed. He loved Laura but Laura was then married to Alvise, against her will. Now he is the lover of La Gioconda. But he stills loves Laura and La Gioconda believes him just to be a young sea captain. Barnaba and Alvise are the villains. Barnaba is the spy for the inquisition and works for Alvise but mostly for himself. He fancies himself in love with La Gioconda. This "love" does not care that La Gioconda loaths him and he is willing to kill La Cieca because she is in his way, or so he thinks. An obsession to possess La Gioconda is driving him. There are no layers in him. He is simply evil. Alvise is one of the leaders of the Inquisition in Venice. He thinks that killing his wife when it is believed and almost proven that she has been adulterous will cleanse the stain to his honor. Alvise is in many ways just like Barnaba just richer and more powerful. Laura Adorno is married to Alvise, she does not love him. Finding out Enzo is there, in Venice, makes her reckless when she should know how dangerous Alvise can be.
Enzo Grimaldi is no hero. He is faithless to La Gioconda. He creates dangers for Laura Adorno. There are no reason here, only feelings. He almost kills La Gioconda in a rage that is all about Laura, and then when Laura is heard and then seen and he understands La Gioconda has saved Laura, then it is "fanciulla santa". The change seem to take just seconds.
Written by operaduets on Friday, January 24, 2014