It was supposed to be so nice. Finally I was to stay at Hotel Opera just across the opera house. Tired after a long night ride in the bus to Oslo rest in a nice hotel bed would be heaven. I booked via HRS.DE as I use to. I thought it would be no trouble, the check-in time was 1500 but I have never had trouble in any of the hotels I use now, not since the 1990s. The hotel was fully booked so I would have to wait. The lounge looked nice with many nice chairs and sofas to rest in. So I thought, no trouble I will just rest here for some time. A nice place to sit but after 5 minutes or less I was told that they had a policy of not letting people staying in the lounge. I having booked a hotel room in this hotel had thought I coud just stay just like has been allowed in other 4star hotels. A security woman came close. So I told the young woman who worked in the hotel that being treated this way I no longer wanted to stay in this hotel. One would think that working in hospitality sector they would be trained in offer apologise that does not work as another insult. "I am sorry that you feel like that". No really making me feel better was it. 3 times, at least, I had to repeat that I wanted to cancel and each time it seemed like she got it. But repeating the nonpology did nothing to helt. I cancelled the reservation also on HRS because I did not trust this "hotel person".

So that was not what I wanted 6 in the morning. 4 star hotel and potential hotel guest was asked to wait in the train station. Oslo main train station, Oslo S, is nice, but not anything to tell people who want to stay in a 4 star hotel to rest in. Tired and not happy I waited in Oslo S. Ate something. Then I was off to see my dad who has Alzheimers. Bus instead of train so it took longer. Then 3 hrs chatting with dad. He is nice and one can talk to him allright it is mostly his short term memory that is affected. Then back to Oslo. I did some shopping but I was tired, so tired. Luckily I have relatives in Oslo and I was allowed with them it was really nice, one cousin with wife and 2 girl, another with her husband and nr 3 had her last night until going back to USA. Tired as I was I should have gone to bed earlier but really seing my cousins again, I could not go to bed until they left.

Sunday. Breakfast with relatives and then to Oslo. It was opera matinee Der Fliegende Holländer 1500-1730. Opera with no breaks. Visits to the WC was stricly before or after. No snack between acts. But I was the last night of Terje Stensvold who was looking forward to be full-time grand-father. With his 70 years one can't really complain that he wants to retire. 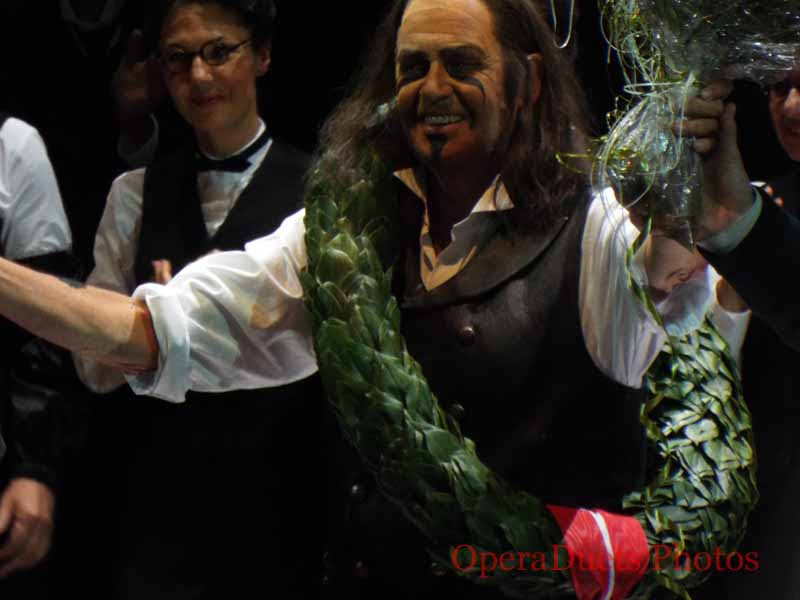 I thought I would be so bored. This was Wagner after all. Opera with no intervals is just plain wrong. I have to admit I looked at my watch. First time I looked one hour had already passed. I thought I saw wrong numbers it was dark there. So this was working and with this regie and scenography it did not make sense to stop between acts.

Here one could have compassion with the Hollender because he care about Senta. When the H understand that Senta would probably suffer eternally he wants to stop the wedding. Senta has promised herself to Erik years ago but she is so much in love in the idea of the H. Erik loves Senta but he comes of more like a brute who has such self-pity. The H. is a man who has suffered a lot for his arrogance but his love for Senta makes him able to put Sentas life and happiness first, something Erik has not learned. Senta shows her "love" for the H. with sacrifising her life, she blows her brains out.

The Romantic Opera of Wagner. Where is the Romance really? Senta is not really the kind of woman one should aim to be. Daland, her father talks about her that she would be as pleasing and obidient to her husband as she is to Daland. Senta, my sweet child. But ever since she heard the story of the flying hollender she has been wild. So it was a great!!

After the opera and the applaus and the speech and flowers it was time to go home. I took the train to the airport and then flew home, and finally 2 weeks later I wrote this...

For more reviews from my travels, see www.operaduetstravel.com.
If you want to see more photos from my OperaDuets Travels, go to www.operaduetsphotos.com
Written by operaduets on Sunday, July 06, 2014