So after my Paris travel (July 3-13, 2015). That was Paris with a side travel to Siracusa, Sicily. I sort of got used to the heat so I was totally unprepared to Norway and it was cold there. 14 degrees Celsius are no joke after getting used to degrees never below 28... But it was nice relaxing at home before my Madrid travel (July 19-27).

So my flights from Oslo to Madrid was the cheapest I got being so late to the game of buying them. I used Momondo and then it was GoToGate that got my business. But that meant my flight from Oslo was not until 16 and via Frankfurt so I was in Madrid before midnight. Late as I was in planning my Madrid trip I failed to buy a plane from my place to Oslo. So I had to travel to Oslo the day before and stay at a hotel. I could have taken the night bus but the wait from 5 to 16 in an airport was nothing I would enjoy. So my trip started on Saturday and I was in Madrid Airport before midnight and it was already Monday when the taxi arrived at my hotel.

It was hot in Madrid and the hotel room was hotter but when I opened the window it got better. I slept until 7 when I started my mini-trip to Barcelona. I used the Metro to go back to the airport and soon I arrived. It took 30-45 minutes to travel to the airport. Vueling flight to Barcelona. Soon I was there. Now I needed to get to the train station Sants. Terminal 1 is too far from the train station to walk so I take the free bus that goes between terminals. Then at Terminal 2b I find the train and buys ticket to Sants. It was a long, hot walk to the trains and queue for buying tickets. Still, I was soon off and then I arrived in Sants. I found my hotel, I love NH hotels.

Then in the evening I traveled to the Palau, got my ticket and waited for Carmen with Sergi Gimenez Carreras as Don Jose. 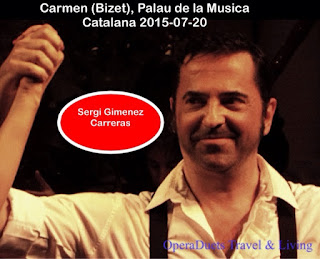 It was not the very different version of Carmen, it just had more cuts in the score. It was Carmen with orchestra on the stage with the stage area used to showcase Carmen as opera as opposed to just a concert. It had seemed to me that this was to be Carmen as 2 hrs continuous play. In that case the opera would have had serious cuts. In stead it was act 1+2 in 2 hrs and the rest as 30 minutes. We had real Flamenco dancers that danced to Bizets music. Carmen, Don Jose, Micaela, Escamillo, Mercedes, Franquita, Dancaire and Remendado was all there and Zuniga was there, too.

It was beautiful and realistic staged.

Back to the hotel to sleep. I slept well and this time I took the train to Madrid. I took the AVE train with Preferente and it was just relaxing and the food was amazing. Best chicken I have ever had. The train left 12 in Barcelona and was in Madrid Atocha at 1510. So incredible hot in Madrid. A long walk from Train to Metro and then finally at my hotel and I just went straight to bed to sleep. The hotel room was so chilly but better when I took off the air-conditioning.