Well, ain't that swell. After a long bus ride in the night to arrive at Oslo Gardermoen airport to go to the wc thinking all is well and then loose all the indominable content of my pouch onto my cloths. And I had thought I did not need another pair of trousers on this trip. But I had my stylish pyjamas that looked more like the real thing than many tights etc that looks like pyjamas. So I was content with my look. But I had to find a bag to have my dirty laundry in so it would not pollute the contents of my luggage.

But in Zurich airport I got some "neue Hosen", Lacoste denim dark blue that I could use in the opera instead of my Italian black denim. Love my new trousers. So in the evening still one can use the expression "neue Hosen" for Claudio Sgura who sang instead of Ruggero Raimondi the role of Sheriff Jack Rance. New for the Zurich production, he is not new for the role, he did it before in London etc.

I would not be surprised to hear that it was the production itself which induced Ruggero Raimondi to withdraw. In the Zurich production no stage is plain and straight. It makes it hard to walk especially as one is supposed to be natural. And it is the biggest drawback to this production and does not seem to serve any meening. Too bad otherwise it could have been perfect. I like the way it uses movie to enhance the drama.

Emily Magee as Minnie was in a fantastic voice and her acting ditto. And I had not been bored by this opera before Minnie (Emily Magee) came into it nor later even as I had a severe head-ache going on all the time. It was Claudio Sgura who really came to be the Jack Rance when Minnie came. I loved him in this role. He reminded me so much of the young Silvano Carroli in the 1983 DVD from Royal Opera House. Jose Cura was Dick Johnson with heart and soul, he voice was beautiful, clear and his acting was superb.

I sat in 1. Rang and third row so I could see the whole stage except when the heads of people in row 1 and 2 hindered me. I also had a head-ache. After the opera a few friends meet at the stage entrance but we gave up on seeing Jose Cura, Emily Magee and Claudio Sgura. It was an amazing opera evening but then it was time to rest. I needed to sleep for I was going to Vienna. And wouldn't you believe it I had to change my system on the plane's wc. That went well, naturally, but one gets nervous after things like that.

Next stop: Madama Butterfly in Wiener Staatsoper. I'll think I will eat first. 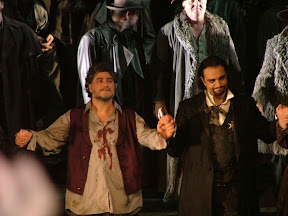 Written by operaduets on Thursday, October 13, 2011