How was Paris? I saw the Eiffel tower from afar, so don't tell me I was no tourist.
:-)
Downloaded the Paris Metro app, so how did you like it? I liked it, after all I was down into St. Lazaire metro station, but I went up again because my French was lacking. I love Paris Taxis, spent my money on them.
So, only opera, did not see much then? I walked in Paris for 3 hrs at one time. I walked down Rue de Rome many times, and I found Hotel Westin where I managed to give the concierge the photobook so that he could give it to Maria Guleghina. So my stay was not uneventful, but to say it was the usual tourist stay in Paris would be wrong.

I like Paris so I think I will come back. Next time I hope I will have better time to play the tourist. I saw the Louvre from one of my taxi rides, and that was enough. Since I love Verdi's Don Carlos I would love to see Fontainebleu.

And now the full story of my Paris stay.

Arrive in Aeroporte d'Orly. It was close to 11 when finally the baggage came. Never have it been so confusing to find the baggage reclaim. Walking, walking, stairs, and then where? Finally there. After finding my baggage, I found me a taxi and so soon I was in my hotel. And before 12 I was in my hotel room. It was lovely. I rested in my room. 1430-1730 walking in Paris, found Hotel Westin and the concierge could give my book to Maria Guleghina.

Soon it was time for Oberto by Verdi in Theatre des Champs-Elysee. Concert version. From the first notes of the ouverture it was definitely Verdi. The first opera by Giuseppe Verdi, so of course it was young Verdi that some times sounded a bit like the older opera composers. Valter Borin sang Riccardo as Fabio Sartori was unwell. He sang Riccardo's two arias beautifully. In Oberto the tenor (Riccardo) is the villain and the bass (Oberto) is the hero.

Maria Guleghina with blond hair and glasses, she looked wonderful. Unfortately she was not well so sometimes the planned execution of notes did succed, but she was still able to make this Leonora a special treat. For those that simply does not like Maria Guleghina even tried to pin the the cutting of caballettas to the soprano, but it was more Radio France etc.

Ekaterina Gubanova sang the role of Princess Cuniza. The mezzo-soprano was in great shape and showed the noble Cuniza in all her glory.

Michele Pertusi was Oberto, father of Leonora and the enemy of Riccardo. Oberto is obsessed with honour. For modern eyes Oberto is too into himself and his own feelings to think what actions would mean for his daughter. Riccardo on the other hand only realize how wrong he has acted after he kills Oberto. Michele Pertusi was wonderful as Oberto, naturally.

After the concert I was invited backstage to the artists room. I was too starstrucked to speak two words with Maria Guleghina, but she liked the photobook so I was more than content.

Before midnight I was back in my hotel. 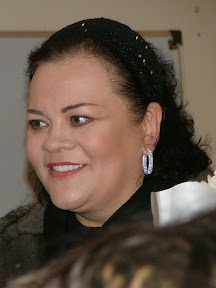 If only La forza del destino at Opera Bastille started in the evening then I could have time to play the tourist in Paris. But the opera started 1430. I had read a review of it so I was prepared for a minimalistic version. I was surprised it was very colourful and vivid. I was also prepared for perhaps Marcelo Alvarez would not be singing. But he sang. And he was great as Don Alvaro. I was prepared to be underwhelmed by Violeta Urmana as Leonora, but she was amazing. Vladimir Stoyanov was also much better as Don Carlo di Vargas than the review said.

The production had a lot that was good. The biggest surprise was that it did not start with the ouverture this time the opera started in the Calatrava castle. After this scene came the ouverture, one of the best performances of the iconic piece. The only thing I would critize Urmana is her use of her arm to show despair, 3 times the same gesture and it gets old. Nadia Krasteva was a wondeful Preziosilla but unfortunately her role was vulgarized by the director. That Preziosilla would walk off with "Pereda" after the scene in the taberna, was not to my liking and not how I understood Preziosilla. Nicola Alaimo was Fra Melitone, too comic and extreme, maybe. Kwangchul Youn was simply wonderful as Padre Guardiano. Mario Luperi was a fine Marchese di Calatrava.

I loved it, even if it had some weakness. After the opera I waited at the stage door, and I saw Kwangchul Youn, Violeta Urmana, Marcelo Alvarez and Nadia Krasteva.

After the opera I was hungry and so I made a mistake of choosing American Atelier near Opera Bastille and ordered a cheese burger. I should have chosen the Italian restaurant near my hotel, Hotel Opera Batagnolles.

Next day off to Zurich.


- Posted using BlogPress from my iPad

Written by operaduets on Tuesday, November 22, 2011

You've got a design here that's not too flashy, but makes a statement as big as what you're saying. Great job, indeed.