I am thoroughly offended by Graham Vick's Otello

It is not just the most heavyhanded regie of all heavyhanded regie. It is not Giuseppe Verdi's Otello anymore, even as the singing and music was beautiful, it was just too racist. If Vick wanted to say that racism was bad, why all the racist imaginery and no outrage.

From the moment I saw the desk on stage and understood that Otello would be onstage during the chorus singing during the "storm" that they see the sail of Otello's ship I knew it would be bad. But I still did not think it that bad. Then as Otello was seated at his desk, he blackened his face in a military vein, but the chorus found themselves suddenly blackened from the palm of their hands too so they went mad. All this happened while singing Verdi's music and Boito's text that certainly was about something else, stupid and offensive in so many ways... "Esultate! L'orgoglio musulmano" when Otello walking from the desk and to the microphone and of course a text window the words "Esultate l'orgoglio musulmano sepolto in mar" repeated over and over again. Then it is Jago and Rodrigo talking. Of course offensive posters come and go during the whole opera... "Fuoco di gioia" the people sing it naturally with video of fire destroying oil fields, houses etc, planes with deadly cargo and white people singing about the joys of fire (destruction). And we are still just a few minutes into the opera... I wanted off this madness, but it had just begun.

So "Roderigo, beviam" starts with a tanks coming onstage. New idea, not. The tanks has Cassio and Monna Bianca making out. And naturally almost all the other people onstage is engaged in something slightly sexual. Old idea, yes. Rodrigo makes Cassio drunk with a drinking competion. OK. Then of course Montano comes and Cassio is goaded into fighting. Then Otello comes out and stops it. One thing that was good in this production and with Thomas Hampson as Jago was that one could see why Otello trusts Jago. Hampson makes Jago a man who on the surface is a friendly man, and of course Otello can see only skin deep. Except one thing that hampers this production is that no matter how great an Otello Jose Cura is in this production he is a white man so why do people call him a moor?

Desdemona comes out still in her white wedding dress. But everybody is dressed in white except Cassio, Rodrigo and other military men, Otello wears white too. Finally it is time for the love duet. Fiorenza Cedolins is Desdemona, but although she is Italian and the opera is in Italian it is very hard to understand what she is singing. All the others poses no such problem. Cedolins is a fine actress but I don't feel she is a Desdemona yet.

Would the second act be better? No. Instead of a tank on stage now it is an burnt-out car and a few palm trees for the garden of Desdemona. Jago talks to Cassio, and then Jago's Credo. Naturally with children, 6 boys, possibly muslem boys. Why? Modern directors distrusts monologues. Stupid and offensive use of children, and it does not even make sense why they are so obedient and how do they know what to do. Then naturally everything goes as Jago plans, even Otello comes in the right moment. Desdemona with children and adults singing her praise, while Emilia takes photos of Desdemona with various muslem people, they are behind barbed wire. Are we in Iraq or in Cyprus? Vick seems to be in Iraq, Verdi in Cyprus. I choose Verdi and declare that Vick does not make sense. Luckily the interaction between Jago and Otello is believable and the quartet between Otello, Desdemona, Jago, Emilia is also great interaction and singing. Jago manages to make Otello believe in Desdemona's guilt.

After the interval back to Vick's Otello. Act 3 a video camera, different big flags, and a tribune for the people to sit on. A table with wine and glasses, a white sofa, a white chair. Otello in white military suit. Jago in a very formal and black militar suit, he almost looks like a general. The camera man is dismissed when Desdemona comes in, Desdemona and Otello each gets their playing with the camera. Desdemona playful in the beginning of the duet, Otello sinister later on. I think this was good acting.

Then "that awful word". The stage hands brought in a big poster of two white hands clasping, peace. The poster of peace was there to hide Otello so that he could see and listen to Jago and Cassio without Cassio noticing. Then the back was turned to Otello, in this production a White Man, on that space it said "nigger". Not only was it there, but it was only reacted on by Otello and for such a short time. Nobody on stage reacted. Jago did not blink, the stage hands. Had Graham Vick taken all the other offensive ideas and posters and left that word, still that word sinks the whole work. Why such an offense without at least some outrage about the racism? Why? If Vick wanted to make a statement and making Otello anti-racist he managed just the opposite.

Then the stage is set for videotaping of Lodovico giving Otello the letter from the Venetian Doge. So Otello's nasty asides to Desdemona while he on microphone, it makes sense? And then "A terra e piangi" where Desdemona instead of walking nobly and firmly to the indicated spot Cedolins chooses to almost faint. Otello sits on the sofa and eats the letter from the Doge, yes he is now mad. Then he shouts " all out" and Jago can gloat who will prevent me from killing him. Ecco il leone, indeed.

4 act is really mostly like all Otello's except there is no bed.

Offensive and stupid I am glad I never have to see this again. To all who was offended by this production I say I AM SO SORRY. This was racist shit but it was not Shakespeare, Verdi or Boito's fault. You know who I blame. 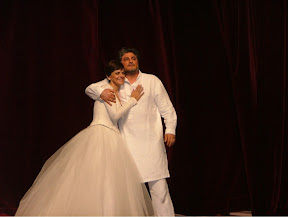 Written by operaduets on Wednesday, November 23, 2011