I love opera and sometimes you will end up in surprising places, like El Vendrell, Catalonia, Spain. First I had to take the night bus to the airport, take the plane to Barcelona and then a train to El Vendrell. And so ca. 1430 on August 3rd, 2013, I was in El Vendrell train station and was starting to go to my hotel when I noticed that something was terribly wrong, my dear phone was missing. OperaDuets Iphone was not in my purse and nowhere in my backpack. So I went to the train station and finally he understood that I had forgot my Iphone on the train from Barcelona Sants to El Vendrell. Nobody found it on the train, nobody that searched for it did. But where is it, does anybody have it?

Sadly, I just had to go to my hotel. No miracle waiting for me. I did not chose the most direct route to my hotel. I went via Plaza Vella. And it was such a small plaza but the stage was there alright. It was not possible to buy tickets yet, that was not until 1700. Then I walked to my hotel, Ramblas Vendrell and rested there until I was back in Plaza Vella and bought my ticket (20 Euros). Back to my hotel again since the restaurants was closed and I had to wait to have something to eat. But finally the restaurant was open for a hungry tourist and I had a pizza verdura. And then back to the Plaza. Sergi Gimenez, the Manrico of the evening was so surprised that I came for this little performance. Michelle Francis Cook and all the rest of cast was eating together and Michelle asked if I had eaten yet, and well, I had, hadn't I. It was so cute to meet them in such a way. 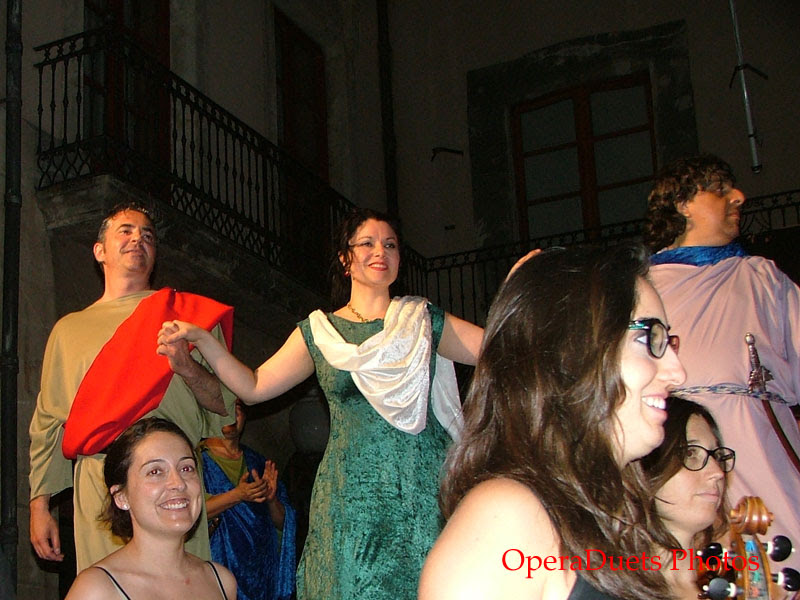 So there I was, in El Vendrell, to see IL TROVATORE in the tiny Plaza Vella.

Michelle Francis Cook, a soprano destined to sing big roles in the big stages of the world (my opinion), sang Leonora with aplomb and delicacy. Sergi Gimenez never lost his way even when the orchestra sounded truly lost in Verdi's masterpiece. I loved his acting, but as he is the nephew of Josep Carreras he (and I) can never escape the memory of Carreras' voice. Fernando Alvarez was a strong, commanding Conte di Luna.

Of the main singers, Montserrat Carreras as Azucena was the one to suffer most from the lack of sync between the orchestra and stage. She had to do with what she had and what she had was the support of the other singers. Sergi was a great support!!

The chorus did an admirable job. I believe the cut in the score was not helpful. One had to take leaps of logic or know Trovatore well to understand it. It also made it harder for the orchestra to follow the score and the singers. Maestro Joan Toldra's tendency to go slow did not help. The orchestra also lacked some of the instruments needed to really make the music swing.

In many ways I could hear the complexity of Giuseppe Verdi's score and to suffer when it became to much to achieve in this night in lovely El Vendrell. But what can one expect after just one real rehearsal. To perfectly understand the musicality and the story of Il Trovatore much rehearsal is needed. But with their limited resources it was admirably done.

So it was over, I got to talk to my new favorite soprano, Michelle Francis Cook. But then it was night and time to sleep in my hotel. So Sunday, up early, breakfast, to train station, no iphone, train to Barcelona Airport via Barcelona Sants. Then plane to Oslo. Airport Train to Oslo Main Train Station, then bus home. At midnight home.

Thank you, Michelle Francis Cook and Sergi Gimenez for a wonderful evening in El Vendrell!!!
Written by operaduets on Wednesday, August 07, 2013