And so OperaDuets Travel 2013 has begun with L'Italiana in Algeri

I was in Vienna to see Rossini's L'Italiana in Algeri with Agnes Baltsa in Wiener Staatsoper. It seemed unlikely on Friday 11th that I would be able to go to Vienna. I went to work but the pain sent me to the doctor. The blood test showed that the crp was good so maybe... If I felt well enough to take the night bus then I would go. Luckily I was able to take the night bus to Oslo Gardermoen airport. And from then all went well. The only thing is... I am still tired. Not enough sleep. The weather was cold in Norway but it was allright in Vienna, no ice and only a few degrees below zero Celsius. I stayed at Hotel Astoria in Kärtnerstrasse, just a few metres from the opera house. It felt like old Vienna with someone to carry my bag and showing me to my big, wonderful room. The flight from Oslo started already at 0630 and just 4 hours later I was in my hotel room. I was tired and needed to sleep but naturally I did nothing about that until hours later. So typically me. It was internet, going to BurgerKing. Burger King because it was closest. But really those chicken wings was too spicy so it also felt like my veggie burger was spicy too. So I only really enjoyed my cola light. Before the opera I had dinner with my Austrian friend. She was smart and chose tomato soup but I had to wait for my veggie pizza. And of course it was too big and the time was too close to opera time. After the opera I had dinner with my friend from Singapure. We were both smart and chose the soup. Crema Pomodoro for me and another Italian soup for him. 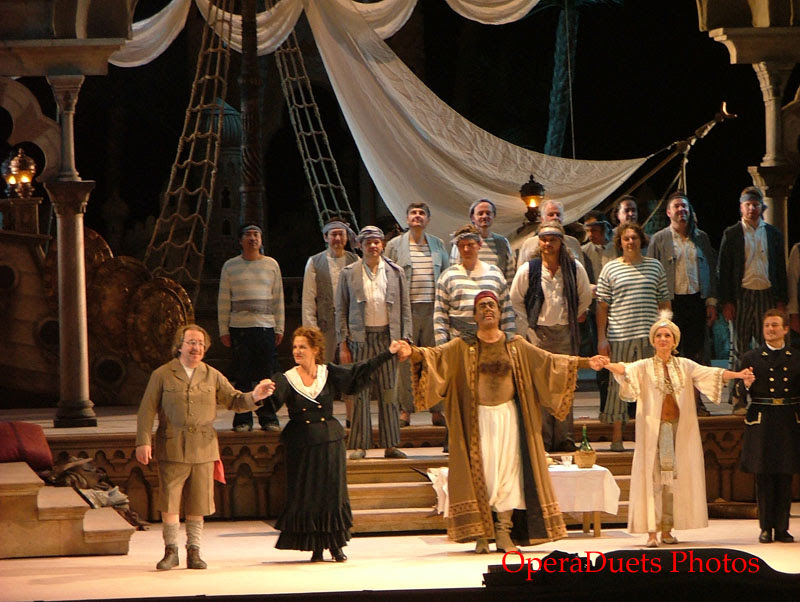 L*ITALIANA IN ALGERI 2013-01-12
Agnes Baltsa as Isabella. What can one say? The lady is magic but she was born on November 19, 1944 says the books. She seems much younger on stage. I have heard her sing better better because she was younger then but she was the main event. Young Antonino Siragusa could not outshine Agnes Baltsa. He was an admirable Lindoro. I almost did not miss Juan Diego Florez. But it was fun to experience a new Lindoro. Ileana Tonca and Juliette Mars as Elvira and Zulma was OK, but I have heard better before. Ferruccio Furlanetto was Mustafa and he was great. But just like Agnes Baltsa even Ferrucio Furlanetto was older and not so shining as they were in 2004.  Most of all I felt that it was time for a new production. The sets and costumes are beautiful but... Maybe it only needs some updating in regie. Mustafa is in brown-face and it no longer feels comfortable. I think that maybe I no longer like the story in this opera.


I had a lovely time in Vienna and my friend got a photo of him and Agnes Baltsa after the opera. Then it was late dinner. Night at my hotel. And early going to Vienna Airport to travel back home. But instead of taking a plane to home I took the bus to my parents' home to meet my uncle and aunt and work more, getting things in boxes. Preparing to move a lot of stuff to my new place and to in the end sell the house. And that was my Sunday. On Monday I met another uncle and aunt and cousin and we had a lovely. We visited dad together and then we had Chinese dinner. When they left on Tuesday their car was full of stuff. Then I was alone to go more work. It took some time so I had to take the night bus home. Today, Wednesday I was at home at 0530 in the morning. I slept in my bed for a few hours and then to work. After work I slept some more and now it is time to sleep. This time I can sleep the whole night. I do hope I will.

SO what happens more? Well, I am NOT too tired to travel again this weekend. So on Friday 18th another night bus to Oslo Gardermoen Airport. Saturday 19th I will travel to Milano via Munich. From Milano to Genova and then in the evening MACBETH by Giuseppe Verdi in Teatro Carlo Felice. Maria Guleghina will sing Lady Macbeth. For Sunday 20th I had planned to see Macbeth again with another cast but then I got an e-mail from Teatro Regio di Torino about ANDREA CHENIER  with Marcelo Alvarez so I bought a ticket for Andrea Chenier. So the BIG change is that on Sunday I will travel to Torino instead of staying in Genova. On Monday 21 I will travel by train to Milano and then via Munich back to Oslo. Then home, no night bus this time I hope. Then Tuesday 22nd the new appartment I bought will be officially mine.


For reviews from my travels, see www.operaduetstravel.com
Written by operaduets on Wednesday, January 16, 2013