Rain and Macbeth in Genova

My 3rd time in Genova, Italy. First was in 2004 for Il corsaro and then in 2007 for Le Villi. I chose to travel with Lufthansa from Oslo via Munich to Milano. From Milano Malpensa airport I took the train Malpensa Express to Milano Centrale, and from Milano Centrale to Genova Piazza Principe. Then I took a taxi to my hotel, Clarion Collection Astoria. So I was at my hotel at 1645. Talked to my dad on phone at 1700.

From 2230 til 1645 travelling from Norway to Italy. I was tired but soon I was walking towards Teatro Carlo Felice. On my way I found a restaurant, Ristorante Europe, where I had Penne pomodoro and Pizza Napolitana. After the meal it was back into the heavy rain and winds towards the opera house. 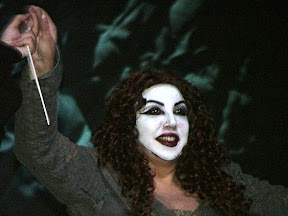 Maria Guleghina was the reason I had come to Genova to see Verdi's Macbeth. She was wonderful. This was a dark vision of Macbeth and his lady. Not much reason to like this two persons. In the scene of the prophecies Macbeth almost beheads Banco before he returns to reason. Lady Macbeth is one of the witches. This production is the only one that I have seen that is really successfull with the witches. This production is thoroughly thought out. Video projection is used but one never think "ah, video" it is integrated in the theatrical forms. Video is used as partt of the scenography and part of the regie. Rubens Pellizario was wonderful as Macduff. As part of this dark vision Macduff almost crowns himself but then cries of VITTORIA and Malcolm is crowned.

In the morning off to Torino and Andrea Chenier.