After Verdi in Frankfurt, Stiffelio in Monte-Carlo

What a difference, coming from sunny Frankfurt to Cote d'Azur with heavy rain. Well, I can say now that I have been in Cannes since thr train stopped there on it way from Paris to Nice. My train from Frankfurt to Paris Est became a noisy affaire since 10 loud Germans was eating and drinking and talking and laughing loudly. And that trip started 6 in the morning. Then Paris Est at 0950 and a long wait in the taxi queu because my next train was leaving from Gare de Lyon 1045. I came in time and although that train was really full it was no problem to rest and even sleep untill we arrived in Nice 1625. In Paris there was just so tiring with many people, in Nice it was more the confusing layout that was tiring. But finally my hotel, Hotel Mirabeau. Nice enough and cheap. But next time, another hotel, I think.

Then soon enough it was time to take the train to Monte-Carlo. Without the rain maybe my impression of the city would have been favorable. But now I have only one word Chaotic. Almost got lost on my way to the opera. The Opera House is inside the CASINO. Inside. It was the most adorned with gold opera house that I have seen. It was an intime feeling to it.

APRIL 26, 2013
The regie was ok except that it ignored sometimes what the libretto said. That makes it less authentic. And poor Raffaele all dressed in colors in this black/white world. Why was he there still with all that rejection. That showed in my opinion an amateurish regie consept. No doubt others will tell me that that was pure genious. Sorry, I disagree. Friends?

The singing was wonderful. Jose Cura did one of his best Stiffelios. Virginia Tola sang Lina. Nicola Alaimo was Stankar. Bruno Ribeiro was Raffaele. Jose Antonio Garcia was Jorg. Maurizio Pace was Federico and Diana Axentii was Dorotea. Conductor was Maurizio Benini 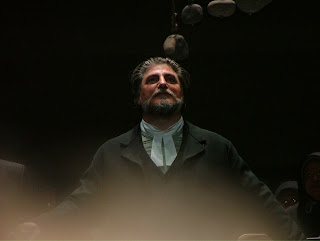