Wonderful Barcelona! Were I not Facebook friend of Sergi Gimenez Carreras then I would have stayed in Nice/Monte-Carlo because I would not have known about this wonderful Verdi concert. Sergi is a tenor just like his uncle, Josep Carreras. He has his own sound and just like Carreras when Sergi sings there is an emotional impact. Tears was in my eyes when he sang La mia letizia infondere from I Lombardi. Rolando Villazon had sung it well in Frankfurt (25/4) but Sergi won my heart and ears. It was the dramatic Verdi that was in the programme where I felt that my tenor was more lyric. Sergi was totally involved in all his arias, duets and tersetts.

Sergi Gimenez Carreras was flanked with the supreme soprano Michelle-Marie Cook and baritone Alberto Cazes Spignolo. The soprano was powerful in all appearances. She sang so wonderful that I have difficult to find words. Here we heard a soprano of world class, powerful voice, deep dramatic insight, simply a joy to hear and see. How I want to see her in full opera production of Ernani, La Forza del Destino, Un Ballo in Maschera, or in short any opera by Verdi that have a soprano part.

The baritone sang the famous Verdi baritone arias and did it well. Perhaps I am not a baritone person.

The concert had no pause and I sat in the front seat. The best seat. But although it had the shortest distance to the singers, voices are often heard better further back in the theater. So my dear Sergi when I listen to the videos from this concert you sound much stronger, much better. BRAVO, Sergi!! 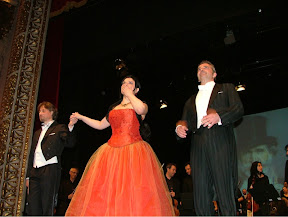 
The chorus and orchestra was wonderful, too.

Hello Borghild!
Thank you so much for your encouraging words. I am thrilled you enjoyed our Viva Verdi in Barcelona and I hope to see you again in future concerts! All the very best!